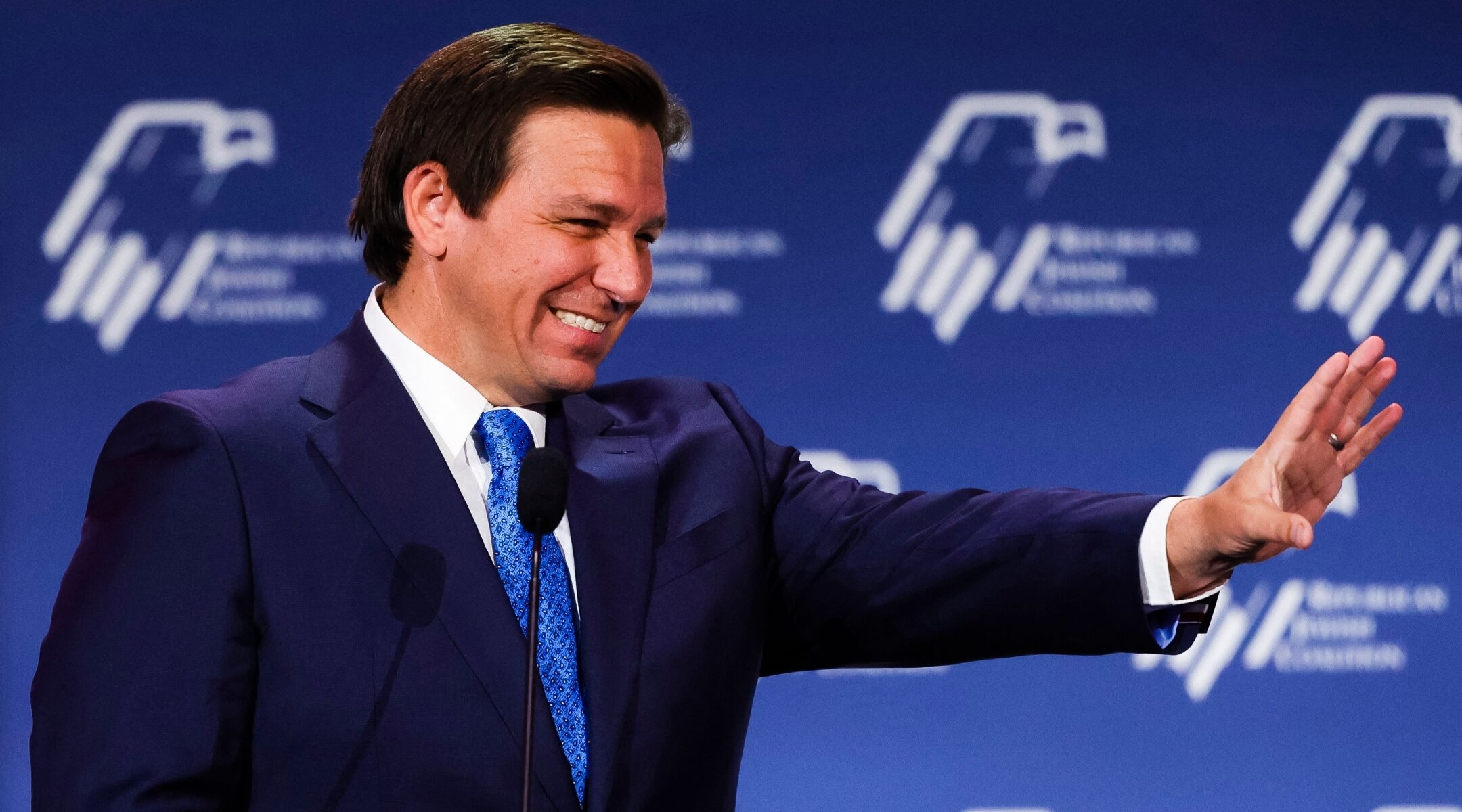 LAS VEGAS (JTA) — For Republican Jews looking for an alternative to Donald Trump in 2024’s presidential race, Ted Cruz presented a tantalizing choice on Saturday — at least for a few minutes.

“When I arrived in the Senate 10 years ago, I set a goal to be the leading defender of Israel in the United States,” the Texas senator said during his chance to address the Republican Jewish Coalition conference last weekend.

The crowd packed into a ballroom deep in the gold lame reaches of the Venetian casino complex lapped it up in what some of them refer to as the “kosher cattle call,” auditions for some of the GOP’s biggest campaign donors.

Cruz applied his folksy bellow to phrases already rendered stale by the speakers who preceded him, making them seem fresh. “Nancy Pelosi is out of a job,” he said of the Democratic speaker of the U.S. House of Representatives, eliciting more cheers from a crowd relishing a fragile majority in the House, one of few GOP wins during midterm elections earlier this month.

But the onetime constitutional lawyer lost the crowd when he asked everyone to take out their cell phones and text a number associated with his podcast, “Verdict.” As the murmurs graduated into grumbles it became clear: About a third of the 800 or so people in the room were Shabbat-observant Jews, taking texting off the table for them.

Cruz never really recovered his rapport with the audience, which included deep-pocketed donors looking to pick a candidate and rally support for him or her. That made his speech an extreme example of the trajectory of just about every address by prospective presidential hopefuls at the RJC conference — excitement tempered by two nagging questions: Does this candidate have what it takes to beat Trump, whose obsession with litigating the 2020 election helped fuel this year’s electoral losses? And is Trump inevitable whoever challenges him?

The former president was at the center of every presentation and of conversations in the corridors during breaks. On the stage, some folks named him, some did not, but — except for Trump himself during a video address from his Florida home — few did so enthusiastically.

Chris Christie, the former New Jersey governor who was the first of Trump’s primary opponents in 2016 to drop out and endorse him, and then among the first to repudiate him during his presidency, repeated the admonition he made a year ago to move beyond Trump.

Trump was the first candidate to announce for 2024, last week, and so far the only one. But others among the half dozen or so likelys in Las Vegas were clearly signaling a run. Nikki Haley, the former ambassador to the United Nations who is a star among right-wing pro-Israel groups for her successes at the United Nations in marginalizing the Palestinians, all but told the group she was ready.

“A lot of people have asked if I’m going to run for president,” Haley said. “Now that the midterms are over I’ll look at it in a serious way and I’ll have more to say soon.”

The biggest cheers were reserved for Ron DeSantis, the Florida governor who was a bright spot for Republicans on Nov. 8, winning reelection in a landslide. DeSantis listed his pro-Israel bona fides (boycotting Israel boycotters) and his culture wars (taking on Disney after the company protested his “Parents Rights in Education” bill, known among its critics as “Don’t Say Gay”).

The crowd loved it. “The state of Florida is where woke goes to die!” he said to ecstatic cheers.

DeSantis did not once mention Trump; the former president has already targeted him saying whatever success he has he owes to Trump’s endorsement of his 2018 gubernatorial bid and dubbing him “Ron DeSanctimonious.’

Getting the nickname was a clear sign that DeSantis was a formidable opponent, said Fred Zeidman, an RJC board member who has yet to endorse a candidate. “It’s a badge of honor, in that Trump has identified you as a legitimate contender for the presidency,” he said in an interview.

Yet even DeSantis was not a clear Trump successor. The RJC usually heads into campaign-year conferences with a clear idea of which of its board members back which candidates, and then relays the word to Jewish Republicans whom to contact to join a prospective campaign.

That didn’t happen this year, and Trump was the reason. Jewish Republicans are still “shopping” for candidates, Ari Fleischer, the former George W. Bush administration spokesman who is an RJC board member and who also has not endorsed a candidate, said in a gaggle with reporters.

Trump was the elephant in the RJC room, Fleischer said, using the Hebrew word for the animal.

“Donald Trump is the pil in the room. There’s no question about it,” Fleischer said right after Trump spoke. “And he is a former president. He has tremendous strength and you could hear it and feel it with this group, particularly on policy, particularly on the substantive issues that he was able to accomplish in the Middle East. It resonates with many people.”

Trump had earned cheers during his speech as he reviewed the hard-right turn his administration took on Israel policy, moving the embassy to Jerusalem and quitting the Iran nuclear deal, among other measures.

“There are other people, they’re going to look at his style and look at things he’s said, and question if he is too hot to handle,” Fleischer continued.

Trump in his talk at first stuck to a forward-looking script but toward the end of it could not resist repeating his lies about winning the 2020 election. Asked by RJC chairman Norm Coleman how he would expand the Abraham Accords, the normalization agreements he brokered between Israel and four Arab countries, should he be reelected, Trump instead bemoaned the election.

“Well, we had a very disgraceful election,” he said. “We got many millions of votes more than we had in 2016, as you all know, and the result was a disgrace in my opinion, absolute sham and a disgrace.”

It was one of many only-in-Vegas moments at an event that brings together disparate groups, including young secular Jews from university campuses gawking at the glitter, Orthodox Jews lurking at elevators waiting for someone else to push the button so they can get to their rooms, and Christian politicos and their staffers encountering an intensely Jewish environment for the first time.

“Shabbat starts on Friday night and ends on Saturday night,” one young staffer explained to another as they contemplated a “Shabbat Toilet” sign taped to a urinal. “But doesn’t it flush automatically anyway?” asked the other.

South Carolina Sen. Tim Scott, another presumed 2020 hopeful, was the only speaker to decry violent attacks on Jews.

“When I think about my brothers and sisters in the Jewish community, in New York City being attacked on the streets of New York, it is time to rise up on behalf of those citizens,” he said. “Rise up against those folks spreading antisemitism, hate and racism.” He was also the only speaker to praise a Democrat, Nevada Sen. Jacky Rosen, with whom he has launched an African-American Jewish coalition in the Senate.

A couple of contenders who have separated themselves from Trump said his name out loud — but with disdain.

“Trump was saying that we’d be winning so much we’d get tired of winning,” said Larry Hogan, who is ending a second term as the governor of a Democratic state, Maryland, with high ratings. “Well, I’m sick and tired of our party losing. This election last week, I’m even more sick and tired than I was before. This is the third election in a row that we lost and should have won. I say three strikes and you’re out.”

Former Vice President Mike Pence peppered his speech with fond references to Trump and his refusal to heed experienced personnel who counseled an even-handed Middle East policy, a move that Pence and the RJC both believe paid off.

Yet Pence also appeared to condemn Trump’s boldest rejection of norms, his effort to overturn his 2020 loss, which spurred an insurrection at the U.S. Capitol in which Pence’s life was threatened. “The American people must know that our party keeps our oath to the Constitution even when political expediency may suggest that we do otherwise,” Pence said.

One contradiction for those in attendance was the longing for Trump’s combativeness while wanting to shuck themselves of Trump’s baggage.

Typical was Alan Kruglak, a Maryland security systems contractor who said he appreciated the pro-business measures Hogan had introduced in his state but was more interested in a fighter like DeSantis.

“Trump did great things, but I think Trump’s past his time, we need younger blood that is less controversial,” said Kruglak, 68. “Trump needs to hand the baton to somebody younger, and who doesn’t have any baggage associated with them but has the same message of being independent.”

The problem is that insiders said Trump still commands the loyalty of about 30% of the party, and that could be insurmountable in a crowded primary.

“If there’s five, six, seven real conservative outsider candidates, Donald Trump will win with a plurality because nobody else will come close,” he said. “If there’s only one or two, it’s a fair fight.”

Who would those one or two be? Fleischer would not say. Among the Republican Jews gathered in Las Vegas, no one would.