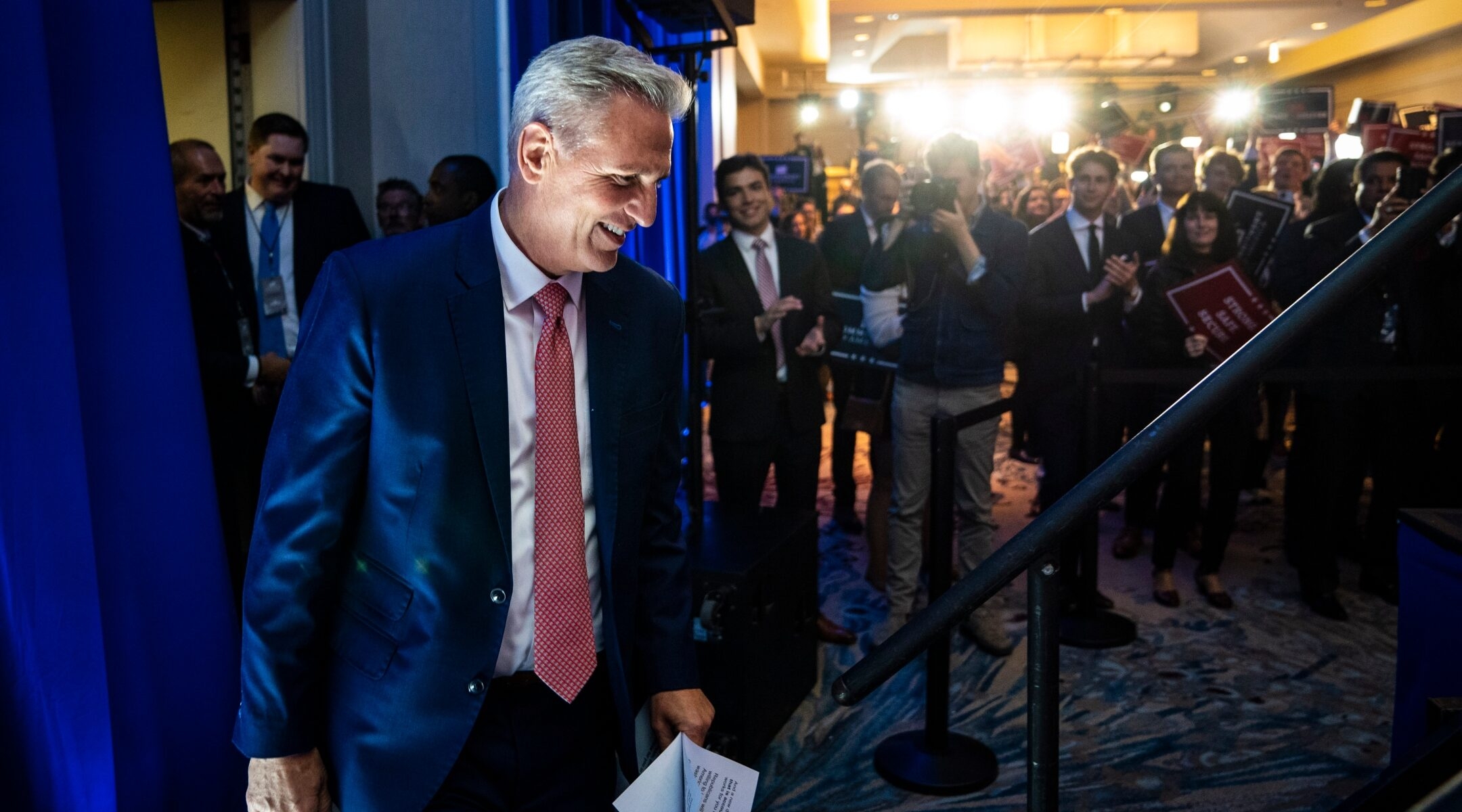 Kevin McCarthy of California walks out to give a speech on the results of the midterm election at the Westin Hotel in Washington, D.C, Nov. 9, 2022. (Jabin Botsford/The Washington Post via Getty Images)
Advertisement

WASHINGTON (JTA) — An array of Jewish groups, including the activist arm of the Reform movement, blasted the likely incoming Republican House speaker, Kevin McCarthy, for pledging to remove Minnesota Democrat Rep. Ilhan Omar from the Foreign Affairs Committee over past comments he has called antisemitic.

The tone of the statement released Monday was unusually combative for Jewish nonprofits, insinuating that McCarthy came closer to to expressing antisemitism than Omar did.

McCarthy, a California Republican whose party won a bare majority in U.S. House of Representatives last month, has pledged to remove Omar because of statements she made that critics say peddle antisemitic tropes about hidden and excessive Jewish power. She has apologized for some, but not all, of the statements.

“As Jewish American organizations, we oppose House Republican Leader Kevin McCarthy’s pledge to strip Representative Ilhan Omar of her House Foreign Affairs Committee seat based on false accusations that she is antisemitic or anti-Israel,” said the statement. “We may not agree with some of Congresswoman Omar’s opinions, but we categorically reject the suggestion that any of her policy positions or statements merit disqualification from her role on the committee.”

McCarthy has also said he will remove California Democrats Adam Schiff and Eric Swalwell from the Intelligence Committee; both members led investigations of former President Donald Trump’s alleged improprieties. Schiff, who is Jewish, currently chairs the Intelligence Committee and has taken a lead role in investigating the deadly Jan. 6, 2021 insurrection at the capitol spurred by Trump’s lies about the 2020 election.

McCarthy has said that Democrats set the precedent when in 2021 the voted to keep off of committees a Georgia Republican, Marjorie Taylor Greene, because of her conspiracy peddling and incendiary comments.

The statement from the Jewish groups said McCarthy was targeting Omar, Swalwell and Schiff to distract from antisemitic expression in his own party.

“Leader McCarthy’s pledge seems especially exploitative in light of the rampant promotion of antisemitic tropes and conspiracy theories by him and his top deputies amid a surge in dangerous right-wing antisemitism,” the statement said. “He posted (and later deleted) a tweet charging that George Soros and two other billionaires of Jewish descent were seeking to ‘buy’ an election. His newly elected Whip Tom Emmer [of Minnesota] said the same people ‘essentially bought control of Congress.’ Meanwhile, Republican Conference Chair Elise Stefanik [of New York] has promoted the deadly antisemitic ‘Great Replacement’ conspiracy theory.”

The letter was initiated by J Street and Americans for Peace Now. APN, Ameinu and the Reform movement are all members of the Conference of Presidents of Major American Jewish Organizations.

McCarthy’s election as speaker is not yet guaranteed. A group far right members of his caucus has said it opposes him. The group is small but numbers enough members to deny him speakership in a House where Republicans lead only by five votes.