The Tell: The Impeachment Chronicles 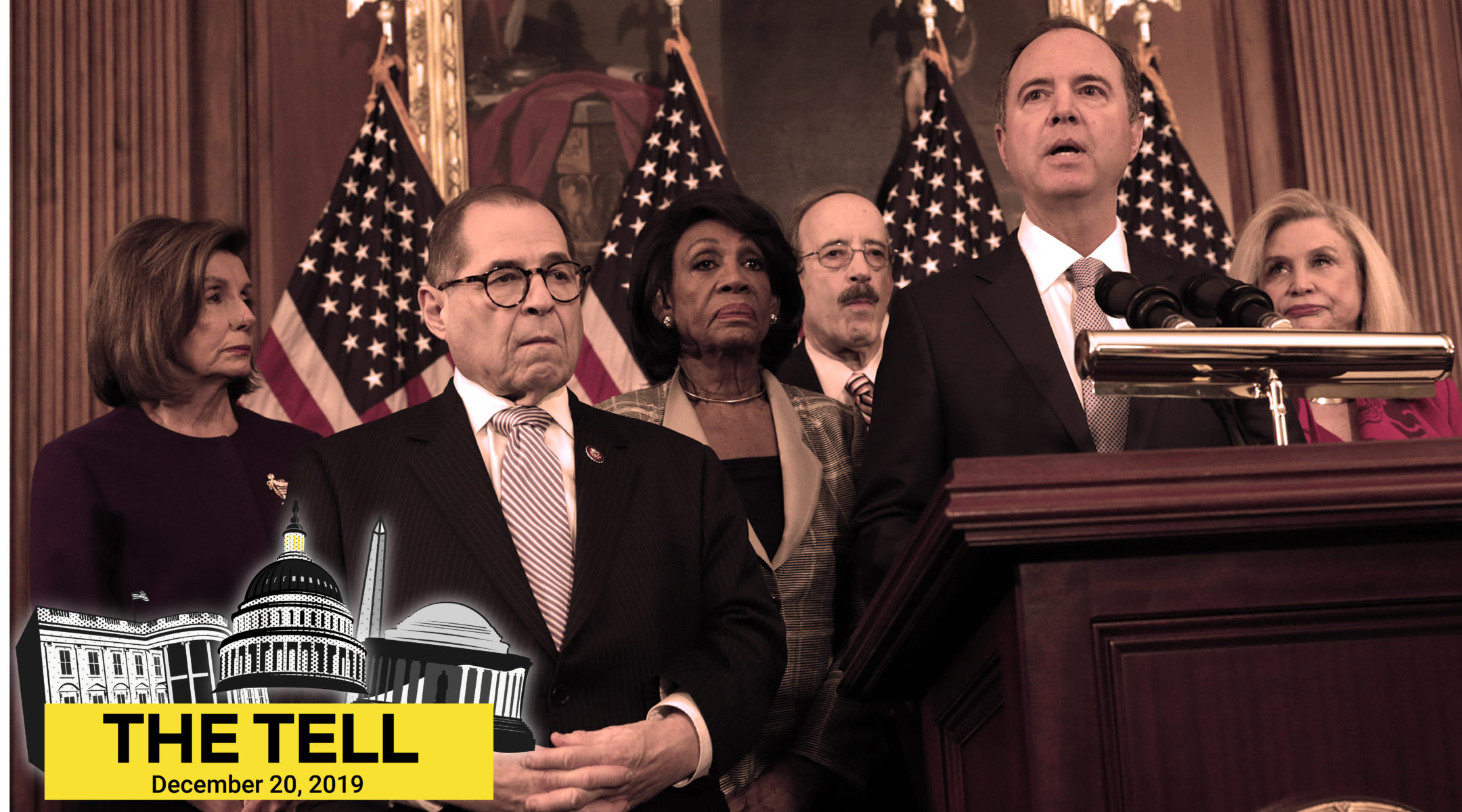 WASHINGTON (JTA) — For the third time in the Republic’s history, the U.S. House of Representatives impeached a president.

There were a number of firsts on Wednesday: Donald Trump became the first elected president to be impeached in his first term — Andrew Johnson had assumed the presidency following the assassination of Abraham Lincoln — and a female speaker, Rep. Nancy Pelosi, D-Calif., was leading the House during the proceedings.

And two Jewish lawmakers, both Democrats, led the 10 hours or so of debate on the pro-impeachment side: Rep. Jerry Nadler of New York, the chairman of the Judiciary Committee, handled the first part, and Rep. Adam Schiff of California was in charge of the second.

Their role was not just symbolic but a recognition of their skills: The impeachment debate was the closest I’ve seen Congress come to the rough-and-tumble, on-one-foot style of extemporized debate one sees in parliaments in Canada, Britain, Israel and Australia.

All three debate masters — Rep. Doug Collins of Georgia handled the Republican side the whole time — adeptly parried points made by the other side, fluently citing witness testimony and the evidence while barely checking their notes.

If triggering the other side is to be considered a success, Schiff scored points, eliciting GOP groans when he said, “I think when the history of this time is written, it will record that when my colleagues found that they lacked the courage to stand up to this unethical president, they consoled themselves by attacking those who did.”

Each debate leader allocated time slots to speakers on their side; you could determine a lawmaker’s status within the party by how much time they received. By that standard, Rep. Lee Zeldin, the Jewish Republican from New York, is a rising star. Collins allocated three minutes to Zeldin, who was elected just five years ago, whereas most Republican members got 30 seconds or a minute.

Zeldin used his time to deliver a blistering attack on Schiff, even using one of Trump’s favored puns, calling the impeachment proceeding a “Schiff show.” That earned what seemed to be a sardonic chuckle from Schiff himself.

There were no surprises in the debate. And in the end, the vote to impeach on two articles — abuse of power and obstruction of Congress — passed largely on partisan lines.

Like Trump, a number of Republican lawmakers positively cited the president’s moving of the U.S. Embassy to Jerusalem, among other pro-Israel plays. (If you’re wondering what Israel has to do with impeachment, the overarching GOP argument is that the Democrats are trying to bring down a president who gets things done.)

Jesus also entered into the mix: Rep. Barry Loudermilk, R-Ga., said Trump was getting a worse deal than the martyred Christian messiah.

“During that sham trial, Pontius Pilate afforded more rights to Jesus than Democrats have afforded to this president,” Loudermilk said.

When does impeachment go to the Senate? It’s not yet clear.

Pelosi said immediately after the vote that she isn’t ready to refer the inquiry until she is certain it will get a fair hearing.

Already battling over what “fair” means are Sen. Mitch McConnell of Kentucky, the Republican majority leader, and Sen. Chuck Schumer of New York, the Jewish Democratic minority leader. Schumer wants four firsthand witnesses the White House blocked from testifying in the House; McConnell wants no witnesses. Each legislator held the diametrically opposite position during the Clinton impeachment.

The two laid down their talking points in speeches on Thursday morning packed with tough accusations but delivered with typical Senate decorum.

Decorum, however, does not quite describe how Trump and Schumer are treating one another.

Schumer kicked back in an interview Thursday with Joe Madison on Sirius XM — but not at Trump’s “kiss my ass” jibes. Instead, Schumer addressed Trump’s attack at the rally on John Dingell, the late Michigan congressman, by attacking Dingell’s widow, Debbie, who voted for impeachment. Trump suggested that John Dingell is in hell, spurring an anguished protest from Debbie Dingell and rare bipartisan rebukes.

“I’m preparing for the first holiday season without the man I love,” Dingell said on Twitter. “You brought me down in a way you can never imagine and your hurtful words just made my healing much harder.”

Schumer said: “At a time of solemnity, when he’s being accused of high crimes and misdemeanors to be nasty, vulgar and just lying, shows the character of the man. He has the lowest character of any president we have ever had. In America, even when we disagreed with other people, they had some degree of high character. This man has none.”

Moderates in the Hot Seat

Republicans have been targeting the 30 or so Democrats who flipped seats in 2018 traditionally held by Republicans, flipping the House. Among them are a number of Jewish members, including Rep. Elissa Slotkin of Michigan, a leader among the freshmen moderates who decided in September to join more liberal colleagues in backing an impeachment investigation.

On Tuesday, ahead of her vote, a White House spokesman accused Slotkin of selling out, telling the Detroit Free Press that “Michiganders deserve a leader who puts their needs ahead of hyperpartisan politics, but Rep. Elissa Slotkin sold out her constituents for Nancy Pelosi’s sham impeachment process.”

One strategy for moderate Democrats in swing districts is to show that they stand with Trump on other issues. Slotkin in recent days has emphasized her backing for Trump’s North American trade policies. In her floor speech on Wednesday voting for impeachment, Rep. Elaine Luria, a Jewish Democrat from a swing district in Virginia, alluded to standing with Trump on a Jewish policy.

Citing the oath she swore both as a U.S. Navy commander and then as a congresswoman, Luria said it guided all her actions.

“I resolved to stand with the president last week and I resolve to stand against the president today,” she said. She was referring to her photo op with Trump last week when he signed an executive order instructing agencies to defund university campuses that tolerate anti-Semitism.

Naturally, both Slotkin and Luria are fundraising off of the post-impeachment GOP attacks.

Existential crisis: We wrote last week about the confusion engendered by Trump’s executive order on anti-Semitism. In ordering agencies to consider whether a federally funded institution tolerates anti-Semitism, it does not define Jews as a race or a nation. It adds expressions of Israel criticism that are — controversially in some cases — defined as anti-Semitism.

I heard from participants in off-the-record call with Jewish leaders (join me for a moment while we chuckle at the notion of joining “Jewish leaders” and “off the record” in a sentence). Much of it was cleaning up the initial misimpression spurred by a New York Times article that the executive order somehow seeks to define Jews as a nationality.

The speakers — Avi Berkowitz, a top aide to Trump adviser and son-in-law Jared Kushner who helped draft the order; Jennifer Lichter from the domestic policy office; and Jennifer Korn from the public liaison office — ably explained what the order does and does not do. But still, there was some confusion.

A lot of folks on the call wondered why introductions were made by Pastor Paula White, Trump’s spiritual adviser. She is, after all, a Christian, and said confusingly, “It really is a victory for all people of all faiths.”

Father Andre Mahanna, a Maronite Christian pastor from Colorado, asked what the executive order could do to protect Christians in Lebanon who are pro-Israel. (The answer: Nothing. It affects U.S. institutions, particularly universities.)

Morton Klein, the Zionist Organization of America president, threw a softball, asking the speakers to elaborate on what truly is new about the order — it adds the International Holocaust Remembrance Alliance definition of anti-Semitism, which includes the anti-Israel expressions. Berkowitz, uncharacteristically, flubbed it and answered with a history of how the Obama and Trump administrations have addressed anti-Semitism.

Nachman Mostofsky, who heads Chovevei Zion in New York, wanted further clarification on whether the order classifies Jews as a religion, race or nation. One of the Jennifers (my sources could not distinguish them) took on the answer and again explained that  “the EO is not defining Judaism or Jewishness, really at all.”

“What is Jewish really is an existential question,” she added in what may be the best answer I’ve ever heard in my 16 years of getting reports on these calls.

Show Me Your Wallet, I’ll Show You Your Heart

Major budget-related bills passed this week show Congress still invested in Israeli-Palestinian peace and also in defending Israel. The upshot is that the two-state solution still has a Washington address, albeit on the opposite end of Pennsylvania Avenue: Democratic candidates for the presidency may talk about leveraging defense assistance to Israel, but Congress is not about to let them get away with it.

Biden to Trump: I Will Replace You

Joe Biden, the former vice president running for the Democratic presidential nomination, posted on Medium a statement on the rise of anti-Semitism. As he did with his campaign launch in April, he blamed Trump in part for the spike in anti-Semitism, going back to Trump’s equivocations after the deadly neo-Nazi march in Charlottesville, Virginia, in August 2017. “There’s a short line from those white supremacists in Charlottesville chanting ‘Jews will not replace us,’ to the shooter at the Tree of Life synagogue in Pittsburgh last year, saying Jews ‘were committing genocide to his people,’” Biden said.

My colleague Josefin Dolsten spoke to Steven Fulop, the mayor of Jersey City, about how he handled last week’s deadly attack on a kosher supermarket. 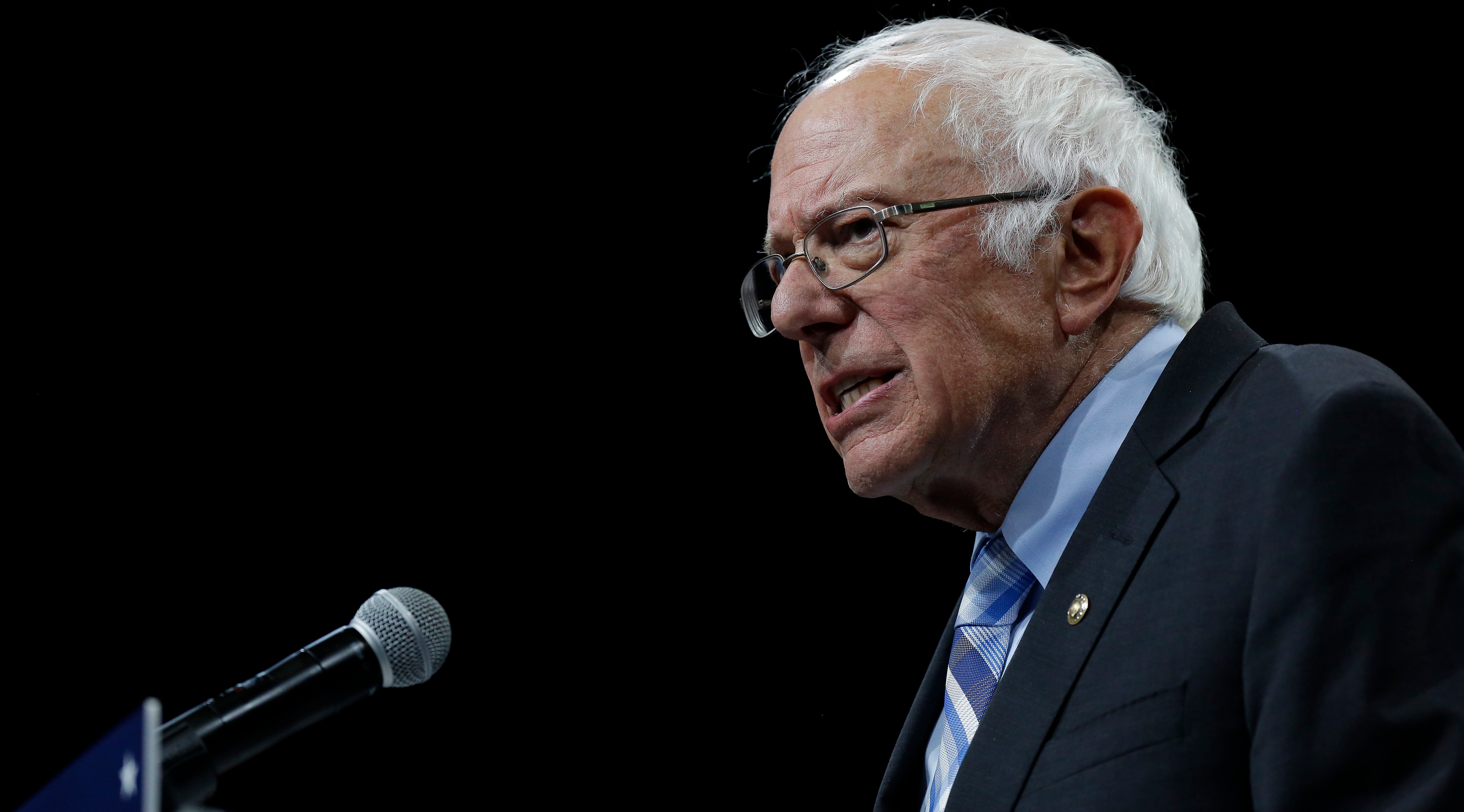 Ruby Kramer at BuzzFeed examines how Bernie Sanders has transitioned since his 2016 presidential campaign from an irascible outsider to the guy who wants to scoop you up in his arms.

Readers, there is a Christmas carol version of Leonard Cohen’s “Hallelujah.” It came out with his hechsher. The Forward covered this baffling development in 2014, and we’re all still dealing, some of us better than others. Novelist Ellen Kushner asked followers to come up with their own variations as a way of getting the bad taste out of her mouth. Lyricist Len Schiff came up with a paean to Martin Buber. It scans! And gets in a reference to a certain ride-sharing service.