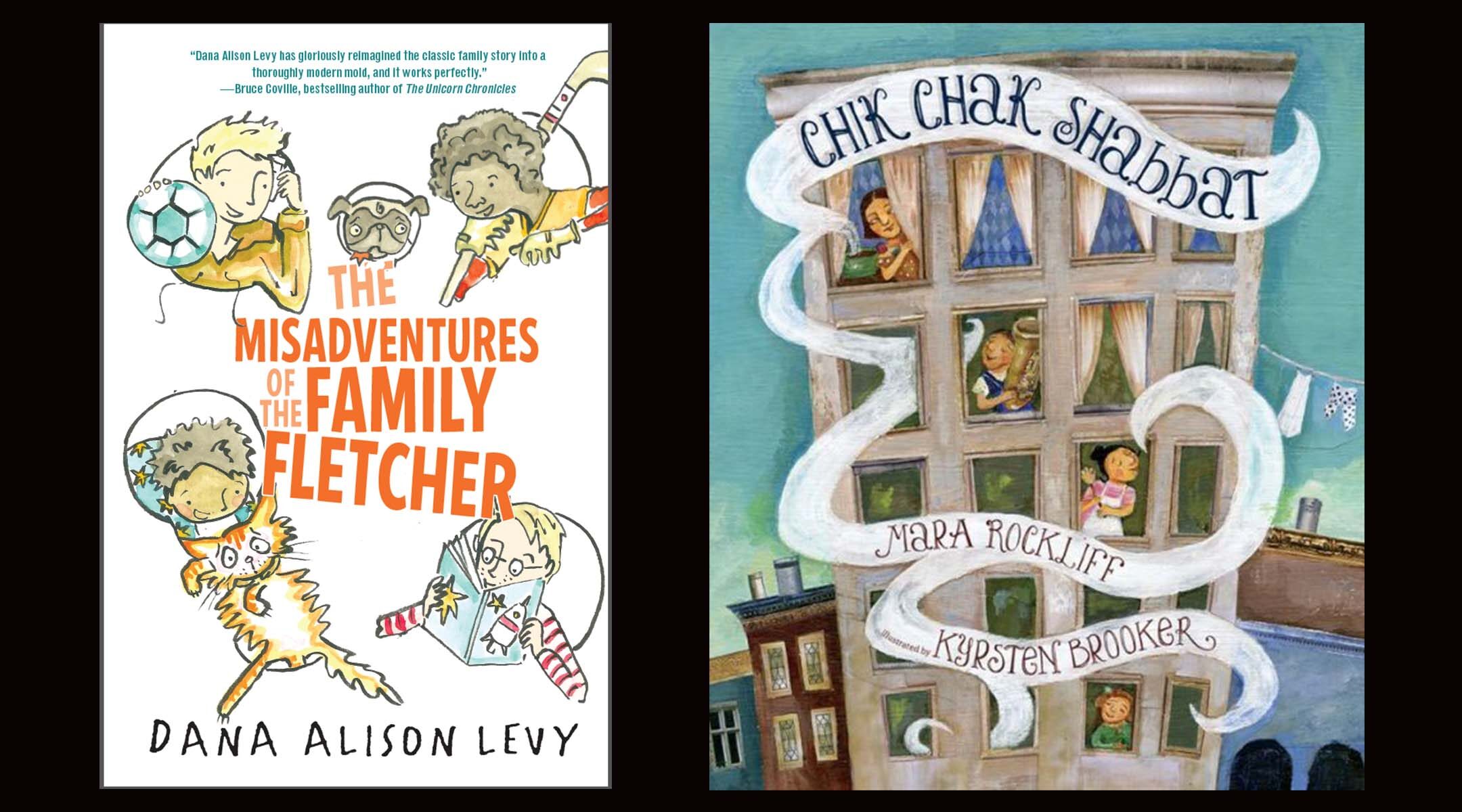 The covers for the Jewish books "Chik Chak Shabbat," by Mara Rockliff, and "The Misadventures of the Family Fletcher," by Dana Alison Levy. (Yearling/Candlewick Press)
Advertisement

(JTA) – Mara Rockliff’s “Chik Chak Shabbat” has become a standard for Jewish children since its 2014 publication. The picture book intended for young readers tells a whimsical story about a group of diverse neighbors who help an observant Jewish woman make her cholent — a stew traditionally served on the Sabbath — when they realize she doesn’t feel well enough to cook it herself.

So why did a school district in Jacksonville, Florida, purchase copies of the book only to keep it from students for 15 months?

That’s what happened at Duval County Public Schools. The district initially ordered Rockliff’s book for its students in July 2021 as part of a larger diversity-themed collection of books called “Essential Voices,” which is offered to educators by Iowa-based educational company Perfection Learning.

The books were delivered last winter, but remained “under review” as of September, when the literary free-speech activist group PEN America published a report on banned books in the United States. PEN’s report alleged Duval County had “effectively banned” Roclkiff’s and other books.

One month later, the district released many of them, including “Chik Chak Shabbat,” to students. At least one book with Jewish themes, “The Misadventures of the Family Fletcher” by Jewish author Dana Alison Levy, remains “under review.”

“We retrieved 179 titles from the Essential Voices collection for further review at the district level,” Duval County Public Schools spokesperson Tracy Pierce told the Jewish Telegraphic Agency in an email this week. “Of those 179, we determined that 106 meet statutory guidelines and are useful toward our reading goals. Those were distributed to classrooms in October.”

School reading materials are under increasing scrutiny amid conservative parent groups’ pressure to remove material they define as “critical race theory” and “gender ideology.” In an increasing number of places, books about Jews have gotten caught in the dragnet, including at a Tennessee district that removed “Maus” from its curriculum earlier this year; a Texas district that briefly removed an adaptation of Anne Frank’s diary; and a Missouri district that briefly removed history books about the Holocaust.

Florida in particular has become a major rallying spot for challenging material in public schools, with its Republican Governor Ron DeSantis, a likely presidential hopeful, signing the “Stop WOKE Act” earlier this year restricting how race and gender concepts are taught in schools. DeSantis-endorsed school board candidates who are so-called parental rights advocates — conservatives pushing for an end to “critical race theory” and materials dealing with gender and sexuality in the classroom — currently hold a majority on Duval County’s board. Elsewhere in the state, the picture book “The Purim Superhero,” which features gay Jewish parents, was removed from a Panhandle-area district in April amid a larger purge of books with LGBTQ+ and gender-identity themes.

Pierce defended the length of time the district took to review the material: “The district will always take the time necessary to make sure the resources we provide for our students are appropriate for each grade level and meet the requirements of state statute.”

The district said 47 titles from the collection were returned to Perfection Learning, while another 26 remain under review. Among those still under review is Levy’s “Family Fletcher,” about a multicultural family that celebrates Jewish holidays. The family has two dads.

The district said Levy’s book was under review “while we await guidance from the state.” Levy did not return a JTA request for comment.

Unlike “Maus,” “The Purim Superhero” and “Family Fletcher,” “Chik Chak Shabbat” does not mention the Holocaust, feature any LGBTQ+ characters or contain any imagery that could be construed as sexual. The book’s most defining characteristic is that it’s about Jews.

Indeed, the book’s depiction of observant Judaism has made it a frequent favorite of the Jewish Book Council and of PJ Library, the literary nonprofit that distributes free Jewish-themed books to children nationwide. The group has distributed a parents’ reading guide to the book, noting, “After reading this story, you and your child may be inspired to make cholent together.” PJ Library declined to comment to JTA for this story.

Rockliff did not return a JTA request for comment, but told the Forward last week, “I doubt that anybody at this school district found [“Chik Chak Shabbat”] objectionable, or even read it.” (The book’s illustrations are by Kyrsten Brooker.)

A customer service representative for Perfection Learning, the company that distributes the Essential Voices collection, promised to forward a request for comment to the company’s CEO, but no comment was provided to JTA.

The district did not broadly communicate that most of the Essential Voices books had been released to students. Last week, apparently under the impression that none of the books had yet been released, several authors (including Jewish writer Ami Polonsky, author of the trans-themed young adult novel “Gracefully Grayson”) spoke out against the review policy at a school board meeting and signed an open letter circulated by PEN America and We Need Diverse Books.

Other Jewish-themed books in the collection include Ruth Behar’s “Lucky Broken Girl,” a coming-of-age autobiographical novel about a Cuban Jewish girl who experiences a car accident while adapting to her new life in New York; that book was also returned to Duval County students in October, Pierce said.

“As an author and a cultural anthropologist, I think young readers should have the freedom to read widely about the human condition to develop empathy and compassion and tolerance,” Behar, a professor of anthropology at the University of Michigan who also signed the petition circulated by PEN America and We Need Diverse Books, told JTA. She added that she has not heard of any schools or individuals objecting to the book’s content.

The district’s reasoning for its review process was insufficient in the eyes of the Florida Freedom to Read Project, an activist group in the state that pushes for increased student access to books. The group has filed Freedom Of Information Act requests in an effort to get the district to disclose its reasoning for reviewing the books.

“We argue there was never a reason to remove the entire collection of books,” the group’s founders told JTA. “No one in the community complained about what their child was reading in their K-5 classroom.

“If there were only a few titles of concern because they were popping up on challenge lists in the state, they could have reduced the amount of time needed to complete a thorough review by reviewing only those titles while the entire collection remained in the classrooms. Instead, they pulled the entire collection and questioned the professional expertise of those that created it.”