The White House celebrates Hanukkah in the shadow of rising antisemitism 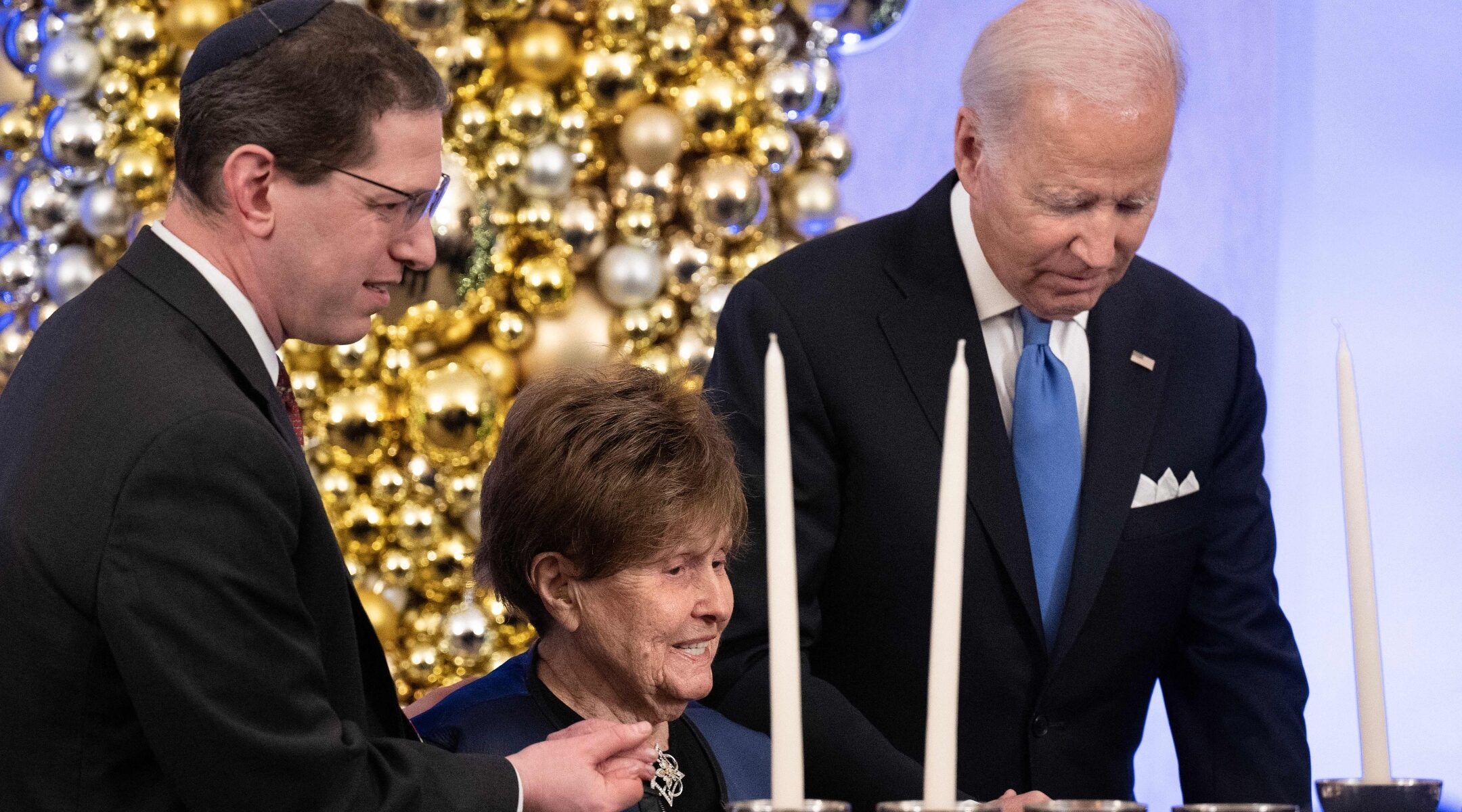 WASHINGTON (JTA) — Two mezuzahs at the vice president’s residence. A custom-built menorah for the White House. A Biden grandson in Hanukkah pajamas.

The Biden administration’s celebration of Hanukkah this year was suffused with grief over reports of burgeoning antisemitism but leavened with words, rites and symbols meant to assure American Jews that this was their permanent home.

Monday night’s Hanukkah party at the White House event included the unveiling of the first menorah to be added to the White House collection. Resident carpenters crafted the elegant slab of weathered wood from lumber left over from a 1950 renovation of the mansion.

“Other menorahs have been borrowed before -— borrowed — beautiful, significant and meaningful ones,” First Lady Jill Biden told the crowd of mostly Jewish guests in the White House’s Grand Foyer, sparkling with gold-themed Christmas decorations, before Monday’s menorah-lighting. “But the White House has never had its own menorah until now. It is now a cherished piece of this home, your home.”

It didn’t hurt either Biden’s messaging that just days earlier the cameras caught them crossing the White House grounds holding hands with their Jewish grandson. Beau, whose parents are Hunter Biden and Melissa Cohen, sported a puffy blue coat, a knapsack, and Hanukkah-themed blue pajama pants, emblazoned with white menorahs.

Jews as a permanent part of the American fabric featured the night before at another first: A public lighting of a menorah at the residence of Vice President Kamala Harris, presided over by her Jewish husband, Doug Emhoff. Emhoff pointed out the house’s mezuzahs, the small cases affixed to the doorposts of Jewish homes.

“There’s two of them, affixed to our door frames. And as you can see the menorah in the window, all for the first time,” Emhoff said. He likened the moment to the first Hanukkah he and Harris celebrated as a couple, when she embraced his traditions.

“Flash forward to when I met this beautiful woman over here,” Emhoff said, after describing the American Hanukkahs he enjoyed as a child in New Jersey. ‘She bought me a menorah for our first Hanukkah together when we were first setting up our home in Los Angeles, because it was important for her to know that we had a menorah to illuminate this home that we were building together — this life that we were building together because she knows it’s important to me. It’s important to me as a Jew and all of us as part of our religion and our culture. And as she said, as the first Jewish person married to a president or a vice president, I understand the weight of that responsibility, the obligation that that brings.”

Emhoff was referring to his work convening a round table earlier this month to solicit strategies for countering antisemitism. At that event, he personalized the struggle, saying “I’m in pain right now, our community is in pain.”

The word “scourge” kept coming up at the events. “I’ve launched a new effort to develop a national strategy to counter the scourge of antisemitism and convene the first-of-its-kind White House summit on combating hate-fueled violence,” Biden said during his remarks, referring to the task force he launched a week after Emhoff’s event.

Monday’s candle lighters included Bronia Brandman, a Holocaust survivor who met with Biden on International Holocaust Remembrance Day in January; Michèle Taylor, the ambassador to the U.N. Human Rights Council, who is a daughter and granddaughter of Holocaust survivors; and Avi Heschel, whose grandfather, Rabbi Abraham Joshua Heschel, fled Nazi-occupied Europe and joined with Martin Luther King in a Black-Jewish alliance during the civil rights movement.

Saying the blessing was Rabbi Charlie Cytron-Walker, the rabbi in Colleyville, Texas, who freed himself and his congregants from a hostage taker last January. “Antisemitism may be on the rise, and thank God that people are standing at our side,” he said. “We have had such overwhelming love and support, especially from our President and from Dr. Biden.”

On Sunday, the first night of Hanukkah, Attorney General Merrick Garland, who is Jewish, spoke at the lighting of the massive “National Menorah” placed on the Ellipse in front of the White House by Chabad-Lubavitch.

He described how his grandmother found refuge in the United States and how two of her siblings perished in the Holocaust. “The protection of the rule of law is the foundation of our system of government,” he said at the lighting. “As attorney general, I will never stop working to guarantee that protection to everyone in our country. All of us at the Department of Justice will never stop working to confront and combat violence and other unlawful acts, fueled by hate.”

The message of permanent refuge was a welcome one, but the degree to which it sank in varied.

Wiliam Daroff, the CEO of the Conference of Presidents of Major American Jewish Organizations, contrasted Biden’s warm welcome with President Franklin Delano Roosevelt’s cold shoulder to the rabbis who arrived at the White House in 1943 to appeal on behalf of Jews in Nazi-occupied Europe. “We’re standing here in the citadel of freedom and democracy, where the entire White House is focused on the Jewish people, on the Jewish story of survival,” Daroff said, “where the food is kosher. “

After Monday’s event, celebrants met for an after-party organized by the Jewish Democratic Council of America in the basement of the storied Hamilton hotel. They ate kosher-style sushi, slurped up cocktails (“The Gelty Pleasure”, a mix of Bailey’s, Kahlua, Demerara syrup and cold brew coffee was $14.99) and shared anxieties about America’s uncertain future, particularly in the wake of former President Donald Trump’s recent dalliance with open antisemites Kanye West and Nick Fuentes.

“Despite what we saw in the White House tonight, antisemitic incidents are on the rise in this country and not just those hateful comments that we hear,” Rep. Kathy Manning, a Jewish Democrat from North Carolina told the partygoers, “but violent attacks in synagogues, in Jews on the street across the country and frankly, throughout Europe.”