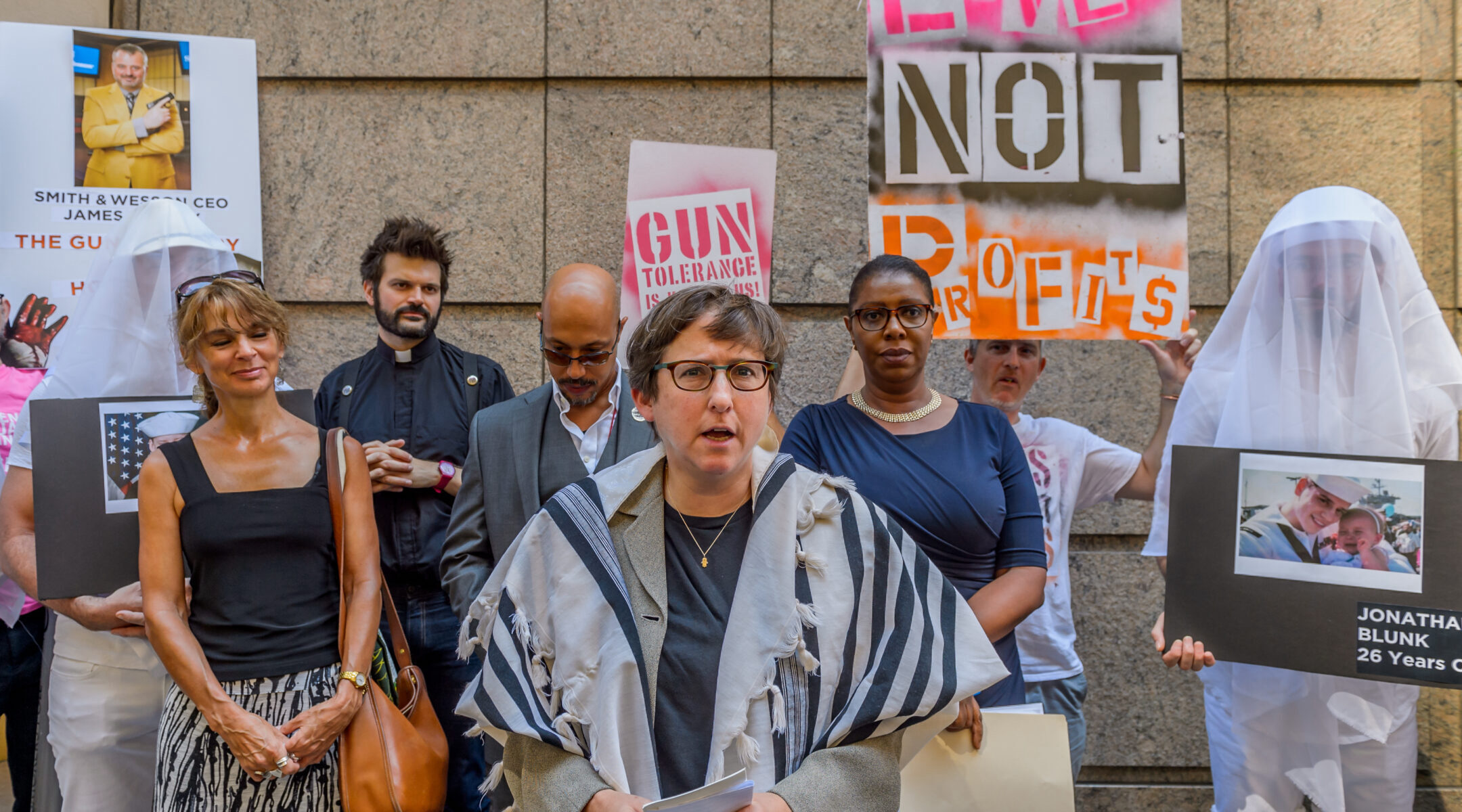 Rabbi Sharon Kleinbaum of Congregation Beth Simchat Torah joined others at a 2016 press conference condemning the appearance of Smith & Wesson's CEO at a conference. (Erik McGregor/LightRocket via Getty Images)
Advertisement

In an announcement to congregants, Kleinbaum, 63, said that “this is the right time to make room for a new senior rabbi for CBST.”

“CBST is in a strong place for the next chapter, and I am confident in our future,” she wrote. “CBST is a place of deep spirituality and a center of activism rooted in Jewish values, texts and justice. It will be spiritually meaningful for CBST to discover who it is without me as the senior rabbi and for me to discover who I am apart from CBST.”

Kleinbaum said plans to leave her post in the summer of 2024.

A New Jersey native, Kleinbaum was ordained at the Reconstructionist Rabbinical College and came to the unaffiliated CBST in 1992. The synagogue, incorporated in 1973, had been meeting in Greenwich Village, and decided to hire a full-time rabbi at what was the height of the AIDS crisis and when the need for pastoral care was urgent. Soon after, more than 2,000 people attended CBST’s Yom Kippur services at the Jacob Javits ‎Convention Center, at the time the largest-ever gathering of lesbian and gay Jews. That number has since grown to over 3,000 people annually.

During her tenure, Kleinbaum has steered the synagogue’s activism in LGBTQ+ issues and beyond. In 1995, she and other activists successfully pushed for a resolution seeking support for civil marriage for gay couples that was approved by the Reform movement’s Central Conference of American Rabbis in 1996. She regularly weighs in on municipal issues, including immigration, paid sick leave for workers and policing policies.

At the same time, CBST ‎expanded its children’s programming, with a Hebrew school, children’s services and educational programming.

Kleinbaum is a supporter of the liberal pro-Israel lobby J Street; in 2020 a right-wing political action denounced her in an ad calling her an “antisemite,” drawing condemnation from the Anti-Defamation League and others.

Kleinbaum, who regularly makes lists of the country’s top rabbis and religious leaders, was also a co-founder, in 2020, of New York Jewish Agenda, a progressive advocacy group.

NYJA “arose from a sense that there is a Jewish voice that exists widely throughout New York, but that is uncoordinated,” she said at the time. “The mainstream liberal Jewish voice is not getting out into the public square in the way that it should.”

In 2021, she was named by President Joe Biden to the U.S. Commission on International Religious Freedom.

In 2018 she married Randi Weingarten, president of the American Federation of Teachers. The rabbi and the union leader appear to enjoy their role as a progressive power couple: After former Trump administration official Mike Pompeo called Weingarten “the most dangerous person in the world” in November, Kleinbaum was photographed in a T-shirt reading, “I am proud to be married to the most dangerous person in the world.”