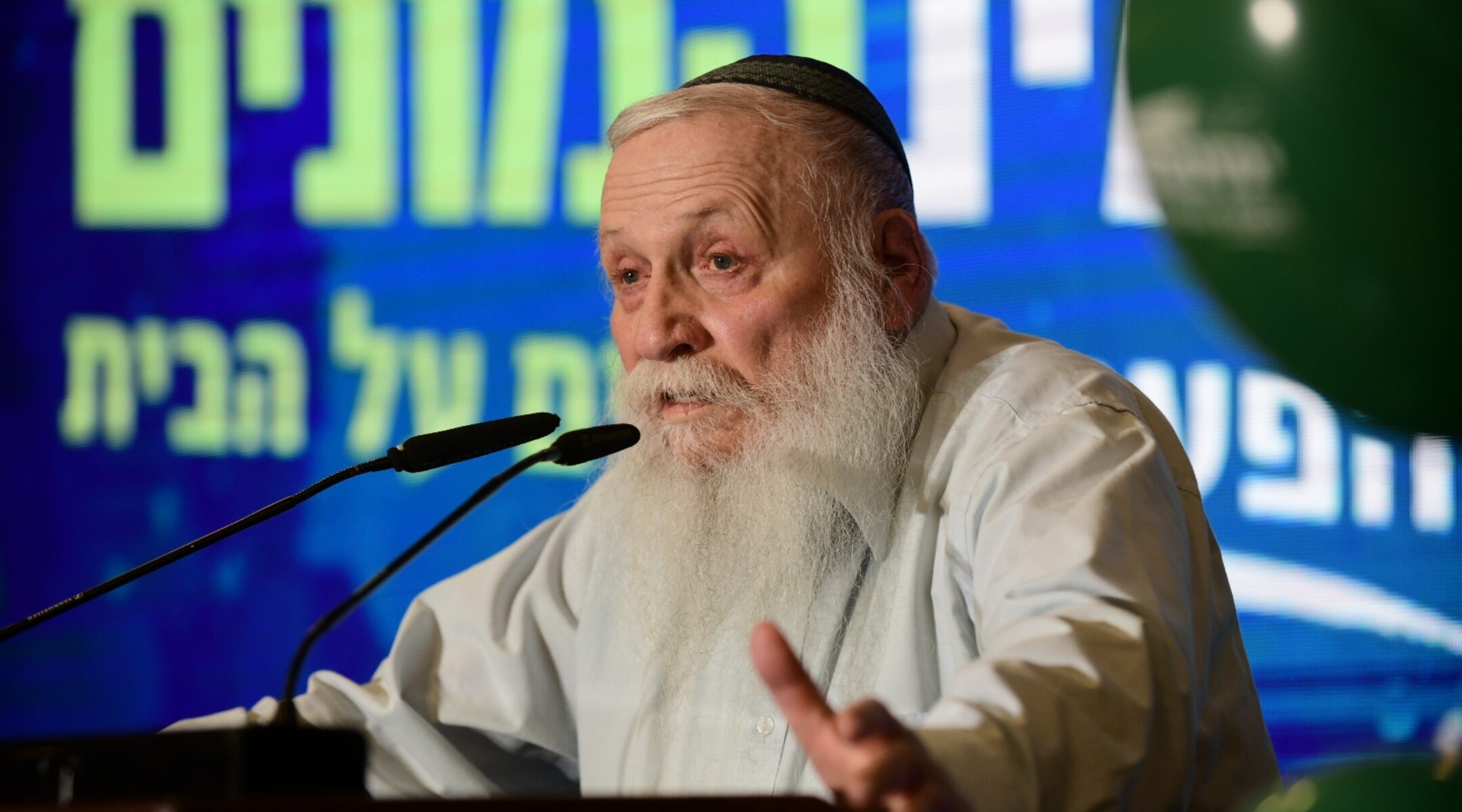 (JTA) — Rabbi Chaim Druckman, whose mission was to unite the people of Israel, was father to a movement now poised to sow some of its deepest divisions in decades.

Druckman, who died Sunday at 90 after contracting COVID-19, was a giant in the religious Zionism movement, which sought to integrate the two preeminent philosophies that saw themselves as bulwarks against Jewish disintegration: Orthodox Judaism and Zionism.

In the 1950s, he established the hesder movement, which blended Torah study with military service. For tens of thousands of religious Jews, his innovation resolved a dilemma that had beset Israel’s founders: What was the most meaningful way for young Orthodox men to spend their first years of adulthood?

Over the years, he led yeshivas and youth movements to extend that vision, and in 2012, he won the Israel Prize, Israel’s national award, for his lifetime of contributions to religious Zionist education.

Yet as much as he sought to bridge divides, he was as frequently positioned at their fault lines, in recent years disparaging non-Orthodox Jews and mentoring extremists who seek the marginalization of non-Jewish and non-Orthodox minorities in Israel. He also at least twice defended and sought to rehabilitate religious leaders convicted of sexual abuse, including of children.

Druckman was born in 1932 in Kuty, in what was then Poland and what is now Ukraine. He and his parents went into hiding during the Holocaust and then fled to the Soviet Union. He entered British Mandate Palestine in 1944 posing as the child of another couple and was reunited with his parents after the war.

He soon became a disciple of Rabbi Zvi Yehuda Kook, the rabbi who helped shape the nationalist outlook of the National Religious Party. Kook’s teachings drove Druckman to become one of the first leaders of the religious Zionist movement to embrace the settlement of lands captured by Israel in the 1967 Six-Day War. He was at the seminal 1968 Passover seder in Hebron that is widely seen as the launch of the religious settlement movement and is believed to have coined the name of its principal body, Gush Emunim, which means bloc of believers.

Druckman became a figurehead of the settlement movement, although he lived most of his life in Mercaz Shapira, the Israeli village near Ashkelon where he ran the influential Or Etzion Yeshiva. He served in the Knesset in coalitions led by Likud and Labor prime ministers, from 1977 to 1988 and then from 1999 to 2003, with short periods in the opposition.

In the wake of the massive influx immigrants after the fall of the Soviet Union, Druckman as a senior religious court judge led an effort to ease conversion to Orthodox Judaism. His suasions backfired, leading haredi Orthodox judges to seek the nullification of thousands of conversions he had supervised.

However much he preached reconciliation among Jews, he stood hard and fast against any attempt to dismantle settlements, going so far as to advise soldiers to refuse orders to take part in the removal of settlements. He also stood by Jews accused and convicted of violent crimes associated with tensions over the settlements, including murder and terrorism, raising funds for those accused and welcoming them back into society.

He also stood by people who were accused of sexual abuse multiple times. He was rebuked in 1999 for failing to report credible reports of sexual assault by a yeshiva head he supervised, Zev Kopilevich, and he later championed another rabbi convicted of sexual abuse, Moti Elon. While he conceded in 2013 that the government was right to rebuke him, he also dismissed as “gossip” just this month multiple allegations of rape against another yeshiva head, Zvi Tau.

Until recently, Druckman championed Naftali Bennett and his Jewish Home Party as the natural heir to the National Religious Party tradition — but in 2021 when Bennett chose the path of reconciliation once championed by Druckman, joining a unity government with secular parties, Druckman cut him off and instead embraced the extremist Religious Zionist Party led by Bezalel Smotrich.

Druckman played a role in brokering the entry of the Religious Zionist Party into the government that Benjamin Netanyahu is expected to bring to power in coming days. The entry of Smotrich and a colleague, Itamar Ben-Gvir, into the government is likely to precipitate a crisis with Diaspora Jewry. They favor restricting Israeli laws to favor the Orthodox, annexing the West Bank and loosening laws that restrict troops from killing or physically harming Palestinians.

At Druckman’s funeral on Monday, Smotrich said Druckman “reproached” him frequently for his excesses, but in a recent interview with Yisrael Hayom, the nationalist daily, Druckman made clear that many of the ideas Smotrich champions had his blessing, including his proposal for a state based on religious law and his plans for anti-LGBTQ discrimination.

Tens of thousands of people attended Druckman’s funeral Monday in his home village of Mercaz Shapira. Israel’s leaders at his funeral remembered him as a unifier.