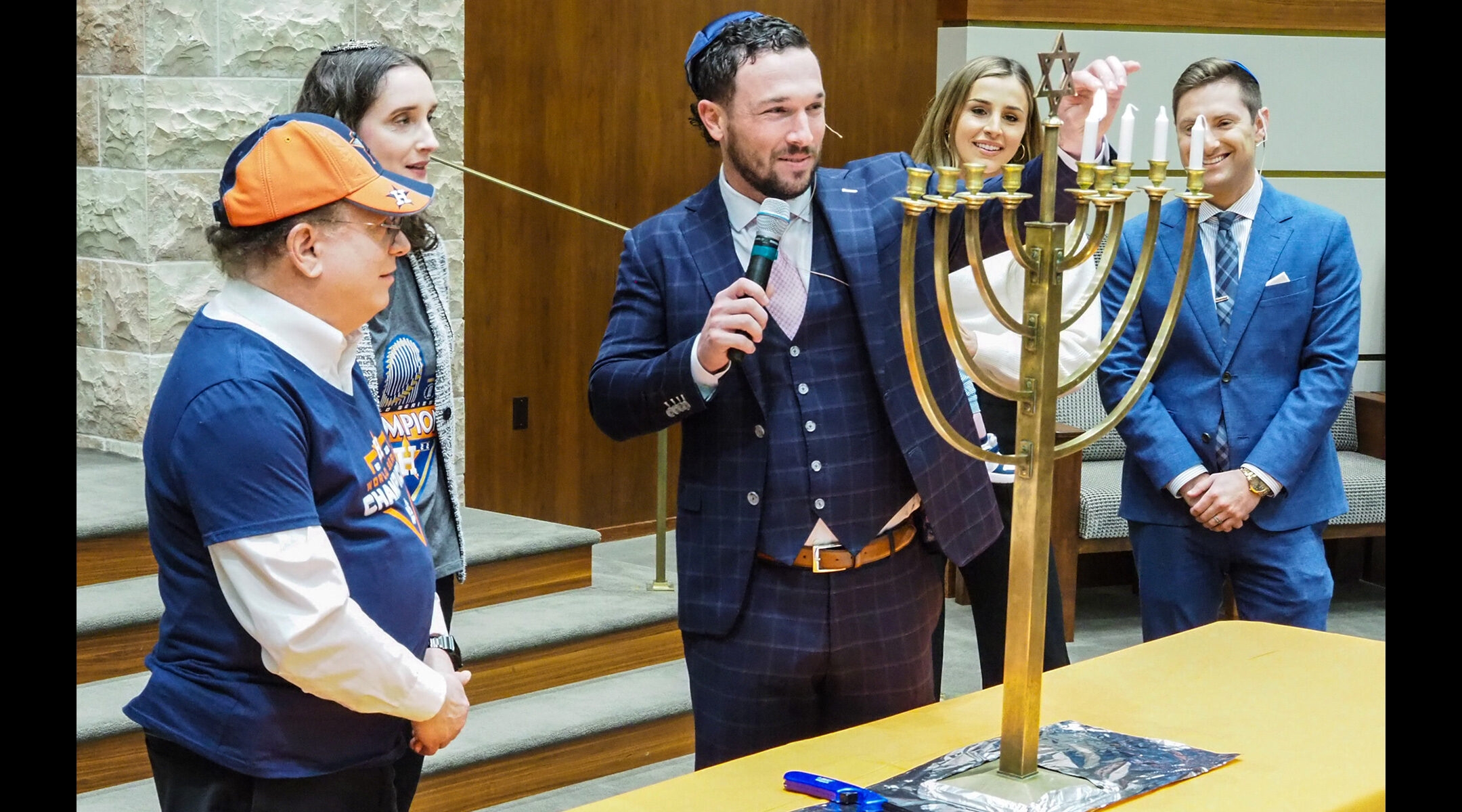 (Houston Jewish Herald-Voice via JTA) — One month after lifting the World Series trophy at Minute Maid Park, Alex Bregman was at Houston’s Congregation Beth Yeshurun lifting a candle to lead the Hanukkah blessing.

On the fourth night of the holiday, the Astros star third baseman sat down with hundreds of congregants and talked about a wide range of topics, from his bar mitzvah speech to his favorite Hanukkah gifts, his not-yet kosher line of beef jerky and the potential bar mitzvah of his son.

The evening started with Bregman joining his wife, Reagan, and infant son, Knox, at the front of the sanctuary to light menorah candles with Beth Yeshurun Rabbis Sarah Fort and Steven Morgen, who ended the blessing with the words, “Play Ball!”

The special ceremony rekindled memories from Alex’s own childhood.

“We would go to Temple Albert in Albuquerque, New Mexico, and then we’d come home, invite my cousins over, light the menorah and open up presents,” Bregman said. “It was mostly just family time for us, but it was always a blast.

“My mom would cook latkes, and we still use her recipe to this day. She actually sent it to Reagan, and I think Reagan might make better latkes than my mom, but don’t tell her that.”

Bregman then shared his thoughts for more than an hour in a Q&A with Ari Alexander, a sports anchor on Houston’s KPRC TV news channel.

The program was put together by many in the congregation, including Beth Yeshurun President David Stein and Chair Lori Herzog.

“We pulled everything together in eight days,” Herzog said. “It was a Hanukkah miracle.”

Bregman shared his bar mitzvah speech from 2007, which focused on using his love of baseball to make a difference in the world.

“I hope I have been able to live up to a little bit of what that 13-year-old wanted the older version of me to be,” Bregman said. “He would probably say you still have a lot of work to do and keep going.”

At 28, Bregman, who was drafted by the Astros in the first round of the 2015 MLB draft, has already achieved more than most players: he is a two-time World Series champion and two-time All-Star.

During the Q&A, he answered questions submitted by audience members, including one about his favorite Hanukkah gift growing up.

“When I got a little bit older, it was baseball cards and a Mark McGwire baseball card. When I was younger it was definitely Legos.

“One year during Hanukkah our house was broken into and robbed. The only room they didn’t take anything from was mine because my Legos were spread out across the floor.”

Decades removed from the Legos, Bregman now is a national star and takes his opportunity as a Jewish role model seriously.

“In this position, you have a platform and you’re able to reach a lot of people,” Bregman said. “I want Jewish kids who dream about playing baseball to believe that they can play in the big leagues and live out their dream, too.”

Bregman noted he has not experienced any antisemitism in his baseball journey.

“Personally, I think we all need a little more togetherness in the world and need to be kinder to one another.” 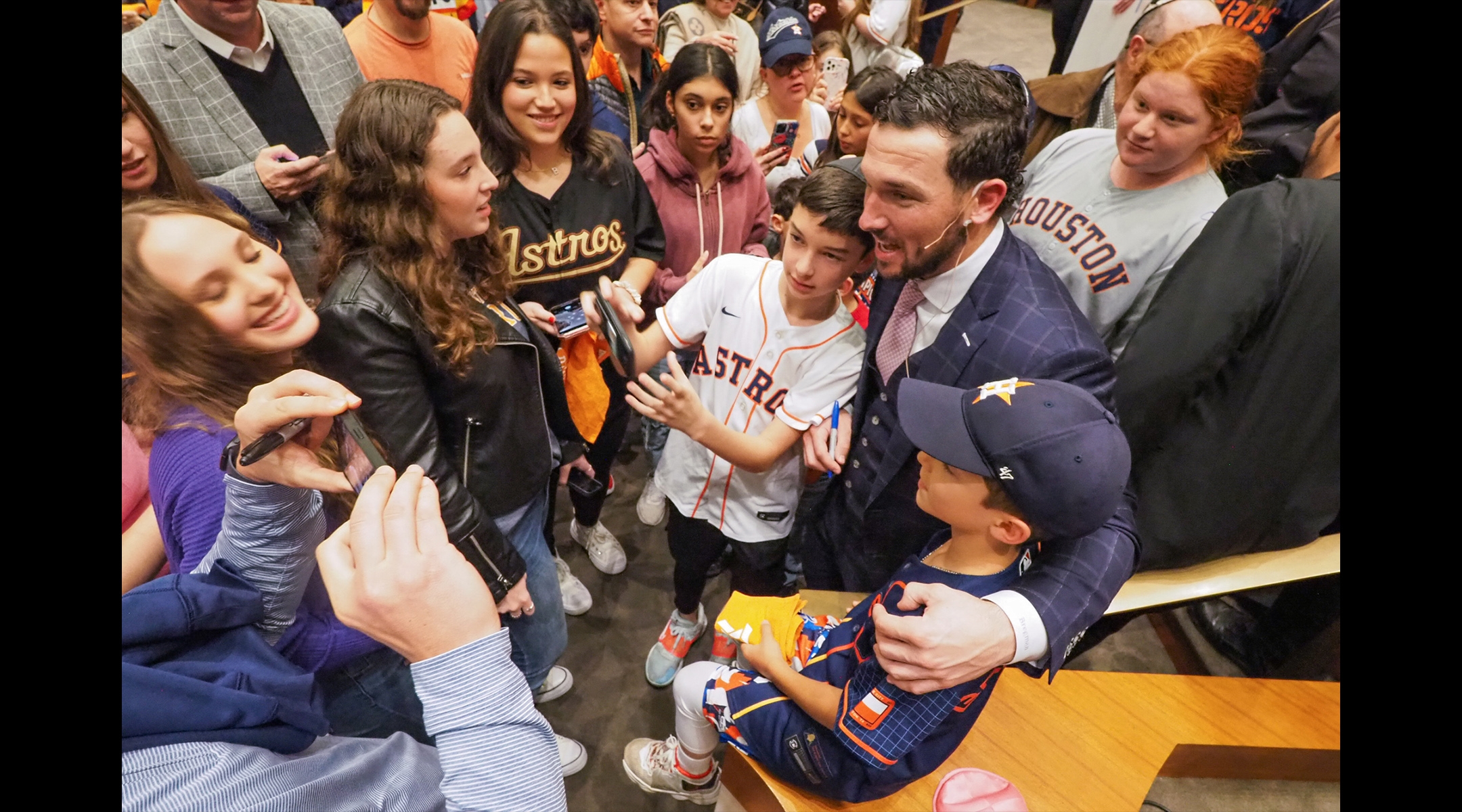 After the Q&A session, Stein presented the Astros star with several gifts from Beth Yeshurun, including an Astros kippah, a menorah, candles, gelt and an autographed baseball from Rabbis Brian Strauss, Steven Morgen and Sarah Fort.

Beth Yeshurun also had gifts for Knox, including a plush dreidel and a “Future Beth Yeshurun Day School Graduate” onesie. Also presented to Alex and Knox were lifetime memberships to Beth Yeshurun.

“Alex and his family truly set an example of living with Jewish values and serve as incredible role models for us all,” Stein told the JHV.

“We knew we would have a large crowd, and everyone that attended left our sanctuary with feelings of great happiness and pride.”

“Alex fulfills the mitzvah of tzedakah and tikkun olam through his Bregman Cares foundation,” Stein said. “He is a shining star of not only the Houston community but the Jewish community, as well.”

Bregman threw out a curveball at the end of the evening, asking for the microphone and offering to take pictures with all the kids in attendance, which led to photos, autographs and plenty of high-fives.

“This was a really fun night,” Bregman said. “Hopefully, we can win a few more World Series and celebrate more Hanukkahs together.”

A version of this story originally appeared in the Jewish Herald-Voice, Houston. It is reprinted here with permission.