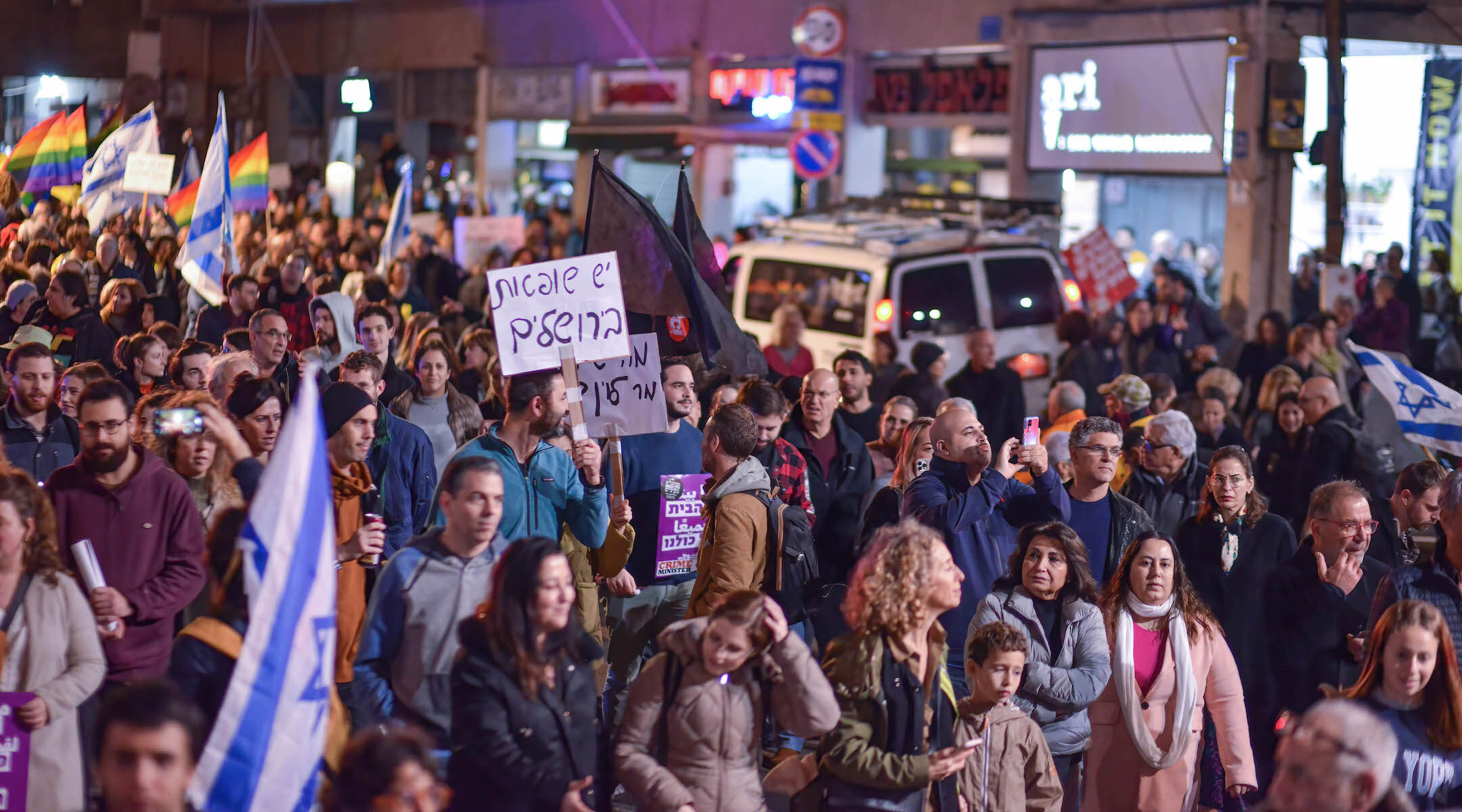 (JTA) – As Israel’s new right-wing government continued to signal that it would push through measures to cripple the judiciary and clamp down on public dissent and news operations, thousands of citizens took to the streets in protest and one prominent opposition figure warned of imminent “civil war.”

A reported 10,000 demonstrators gathered Saturday night in Tel Aviv to protest against Prime Minister Benjamin Netanyahu’s new right-wing government, which contains several ministers who are openly hostile to Arabs and Palestinians, LGBTQ people and liberal forms of Jewry. Organizers, many of whom hailed from Israeli left-wing groups, advertised the demonstration as “against the coup d’etat carried out by the criminal government which threatens to harm all citizens whoever they are,” according to the Times of Israel.

Many of them directed their ire toward the proposed legislation that would allow the Knesset, Israel’s parliament, to overrule decisions by the Supreme Court. Some carried signs comparing Netanyahu and his coalition to Nazis. Others used the rallying cry “Crime Minister,” referring to Netanyahu’s ongoing corruption trial.

Counter-protesters were present as well. At least one anti-Netanyahu lawmaker who attended the protest, the Israeli Arab Knesset head of the Hadash Ta’al party Aymen Odeh, was assaulted, according to video of the event, and police are investigating.

Netanyahu and his allies decried the protests, with the prime minister condemning the Nazi comparisons and displays of the Palestinian flag. “This is wild incitement that went uncondemned by the opposition or the mainstream media,” he tweeted on Sunday. “I demand that everyone stop this immediately.”

Another protest was set for Thursday, this time by attorneys who are planning a walkout to register their disapproval of the proposed judiciary changes. But government ministers have offered no indication that they are considering the views of Israel’s left, instead pressing forward with a raft of right-wing proposals. In recent days:

It is not yet clear whether the moves will turn into policy or whether they represent a flurry of proposals and posturing as parties stake out their positions at the start of a new government. But either way, tensions are flaring. Former defense minister and chief Netanyahu rival Benny Gantz said that Netanyahu was spurring on a “civil war in Israeli society” and called on protestors to keep up their pressure; the prime minister in turn accused Gantz of leading “a call to sedition.”

At least one proposal by members of the new government appears to have already hit a snag. Lawmakers in a haredi Orthodox party said they wanted railway maintenance to cease on Shabbat, and Netanyahu reportedly backed their demand. But on Thursday, the transportation minister, a member of Netanyahu’s party, rebuffed the demand.