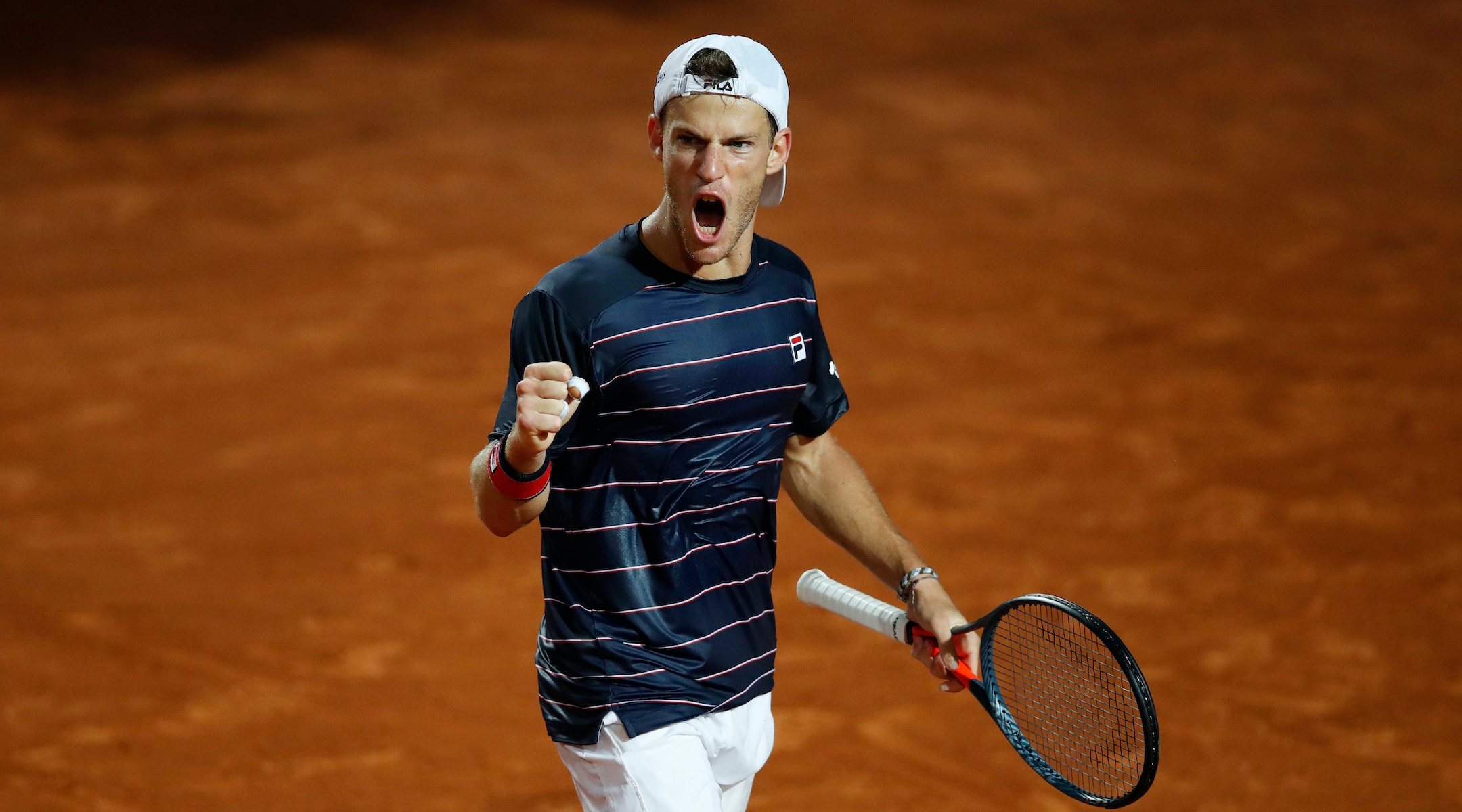 Diego Schwartzman celebrates in his match against Rafael Nadal at the Italian Open in Rome, Sept. 19, 2020. (Clive Brunskill/Getty Images)
Advertisement

Sports fans are among the most superstitious folks out there. Do you have a game day ritual, a lucky jersey, or some other inexplicable tradition that your team can’t win without? Let us know by replying to this email.

And if there’s any masked Jason we should be afraid of, it’s Pittsburgh Penguins left winger Jason Zucker, who is putting together his best season since he was traded to Pittsburgh three years ago.

A Jewish guide to the Australian Open 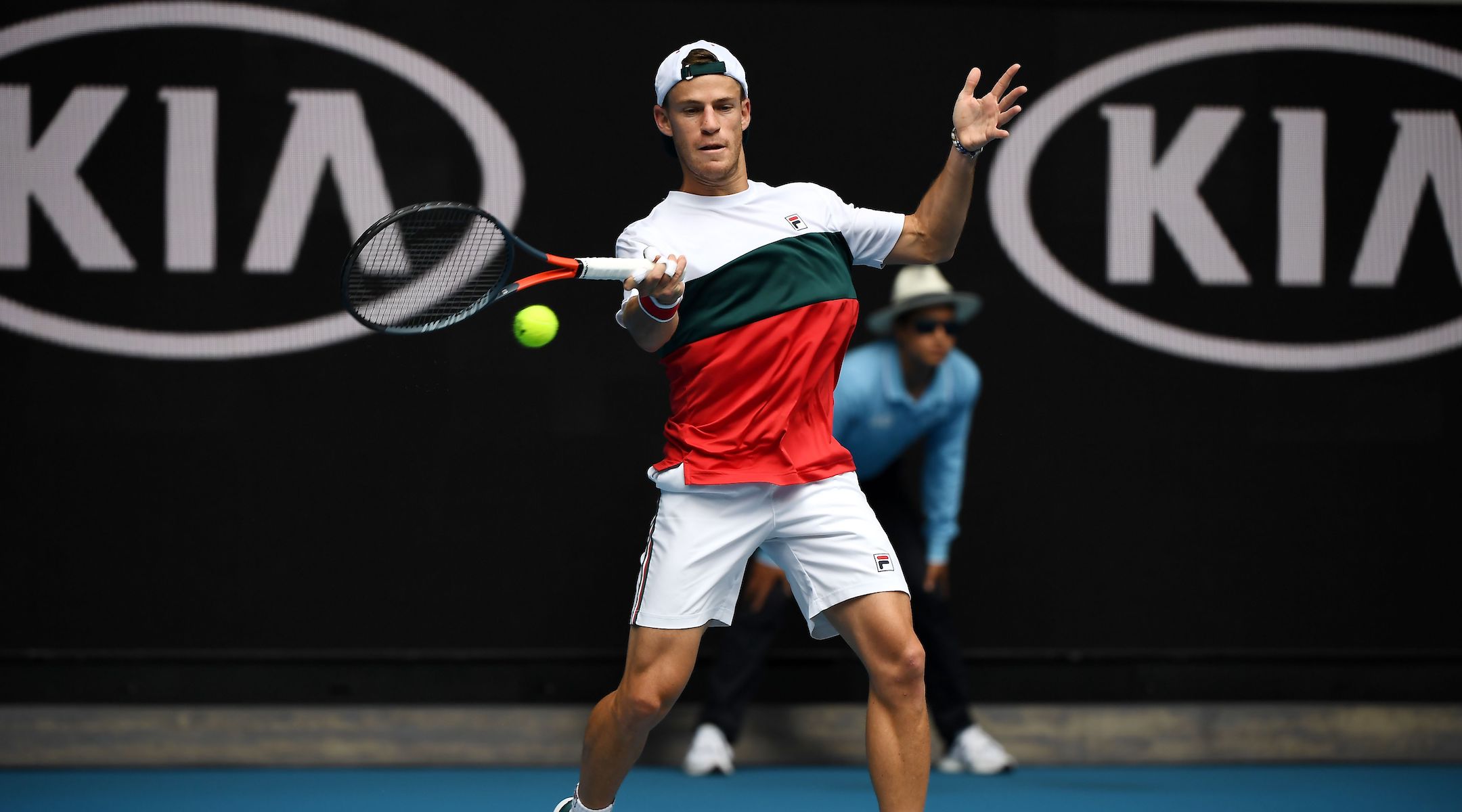 Diego Schwartzman shown during his match against Serbia’s Dusan Lajovic at the 2020 Australian Open, which Schwartzman won in straight sets, Jan. 24, 2020. (Manan Vatsyayana/AFP via Getty Images)

The first major international sports tournament of the year is upon us, as tennis stars from around the world descend upon Melbourne for the Australian Open, which begins Monday.

Before we get into this year’s tournament, we remember Jewish tennis legend Dick Savitt, who died Jan. 6 at 95. Savitt won the 1951 Australian Open and Wimbledon Grand Slams, becoming the first Jewish player to win either tournament. May his memory be a blessing.

Now here are the Jewish stories to watch at the 2023 Grand Slam down under:

The 32-year-old Delaware native is ranked 62nd in women’s singles and looks to make it past the second round for the first time since 2016.

Fritz does not identify as Jewish, but his maternal grandfather was Jewish, and his great-great-grandfather was David May, the German-Jewish immigrant who founded Macy’s. Fritz is the best player of this bunch, entering the Australian Open as the 8th seed on the men’s side, with a men’s singles world ranking of 9. Fritz made it to the fourth round last year.

The Italian star, who has said her favorite book is “The Diary of Anne Frank,” is ranked 69th in women’s singles and reached the third round last year.

Karatsev was born in Russia, but moved to Israel at 3 years old and has said the country still feels like home. He’s currently ranked 52 in men’s singles, two years after reaching the semifinal in a Cinderella run in 2021.

Ranked 25th in men’s singles, Schwartzman got his start at his local Jewish sports club in Argentina. He made it to the second round in last year’s Australian Open.

Shapovalov, ranked 22nd in men’s singles, was born in Tel Aviv to a Ukrainian Jewish mom and Russian Orthodox Christian dad. He often wears a cross when he plays, but his mom considers him Jewish. He reached the quarterfinal last year.

* One last Jewish tennis note: Elina Svitolina, the Jewish Ukrainian athlete who had taken a break from playing due to the war in her home country — and the birth of her first child last fall — has announced that she will return to playing this year.

KEN-GRATULATIONS. Veteran baseball reporter Ken Rosenthal has been named a co-winner of the National Sports Media Association’s 2022 sportswriter of the year award. In addition to his TV work for Fox Sports, Rosenthal has written for The Athletic since 2017.

NEVER FORGET. A Jewish community center in Boca Raton, Florida, is currently featuring an exhibit with rare Holocaust sports memorabilia from Jewish historian Neil Keller. The collection includes more than 100 items from Keller’s personal collection, including an autographed family photo that belonged to Victor “Young” Perez, a World Champion boxer who was killed during the Holocaust.

The NFL playoffs begin this weekend with the Wild Card round, and two Jewish players remain: Jake Curhan of the Seattle Seahawks and Greg Joseph of the Minnesota Vikings. The Seahawks face the San Francisco 49ers on Saturday, while the Vikings host the New York Giants on Sunday. Both games are at 4:30 p.m. ET on FOX.

Jason Zucker and the Pittsburgh Penguins play the Winnipeg Jets tonight and the Carolina Hurricanes Saturday, both at 7 p.m. ET. (Mark Friedman was sent back down to the AHL this week.) On Sunday, each of the NHL’s three games feature a Jewish player: Adam Fox and the New York Rangers play Montreal, Quinn Hughes and the Vancouver Canucks face Carolina, and Jakob Chychrun and the Arizona Coyotes play the Jets.

The Australian Open begins Monday. The daily match schedule is released the prior day, so check here on Sunday afternoon.

Has Carlos Correa surpassed Jewish gymnast Kerri Strug for the most famous ankle in sports?

One Twitter user posed the question this week after the star shortstop finalized his free-agent contract with the Minnesota Twins — after two $300+ million deals fell through over concerns about his ankle. Strug, of course, fought through a serious ankle injury to clinch the gold medal for the United States at the 1996 Olympics.