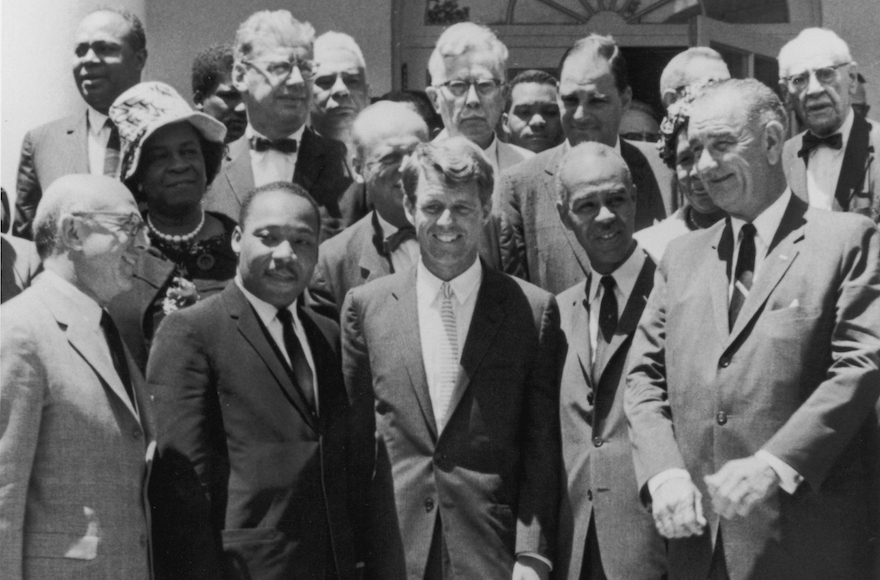 America’s “radical right” has created “a huge patchwork blanket” of radio broadcasts, has made easier the recruitment of members by the John Birch Society, which “contributes to anti-Semitism,” and poses “the greatest danger” to the civil rights movement, the Anti-Defamation League of B’nai B’rith was warned today.

The warning came from Benjamin R. Epstein, national director of the ADL, and Arnold Forster, the League’s general counsel. They presented a special report dealing with the radical right to the League’s national commissioners at the closing session of the ADL’s 54th annual meeting, which has been in session since Friday.

They accused the John Birch Society again of “contributing to anti-Semitism.” They noted that, last year, the ADL had exposed the “rantings and ravings” of the radical right, including the Birch Society. “Since then,” they said, “the Society has done nothing to solve the continuous problem. Instead, it has concentrated on attacking its critic, the ADL, rather than its critical problem, that of attracting anti-Semites to its ranks.”

The report declared that a “united front” attack on the civil rights movement as an alleged Communist conspiracy is being waged by right-wing extremism, led by the John Birch Society “which provides leadership, strategy and necessary tools.” According to the Epstein-Forster report:

Some 400 stations broadcast commentaries by Clarence Manion, a member of the national council of the John Birch Society;

Almost 200 stations carry broadcasts by the Rev. Billy James Hargis, termed as “a fiery evangelist of both religious and political fundamentalism”;

More than 125 stations broadcast the speeches of another right-winger, Dan Smoot;

More than 150 stations broadcast the messages of the White Citizens Council;

Other stations beam the commentaries of Maj. Edgar C. Bundy, and of Richard Cotten. The report called the latter “an undisguised anti-Semite.”

The ADL leaders said they believed that, in the long run, “America will reject the Birch Society and its allies,” but voiced deep concern over the “hazy borderlines” between the radical right and “true conservatives.”