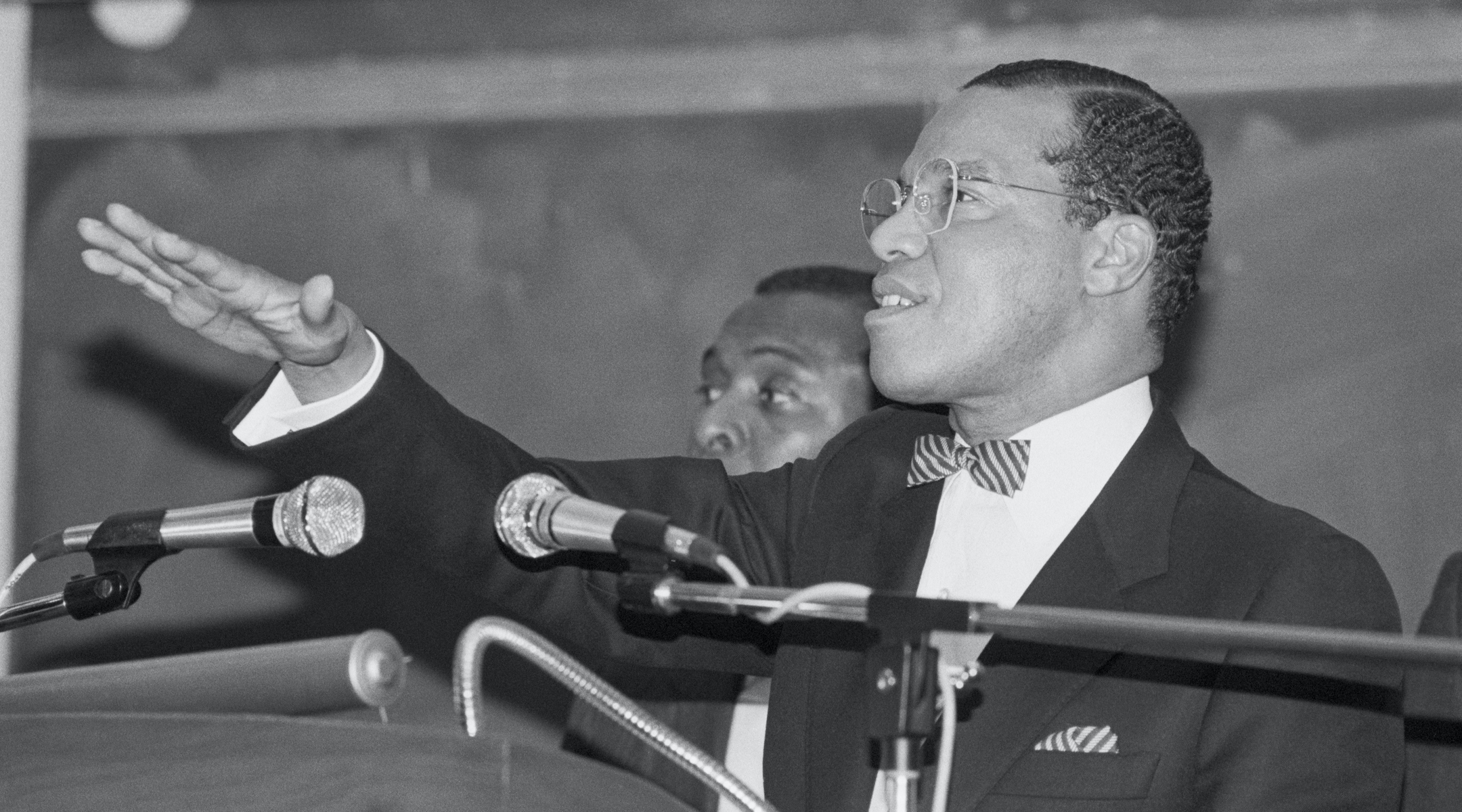 Louis Farrakhan gestures to more than five hundred students in an appearance at the University of New York at Albany, April 24, 1985. Farrakhan showed despite widespread protests and opposition by the student association and various Jewish groups in which he was criticized for his anti-Jewish remarks during the 1984 presidential election. (Bettmann/Getty Images)
See Original Daily Bulletin From This Date
Advertisement

Controversy boiled anew today over Black Muslim leader Louis Farrakhan, a leading supporter of Rev. Jesse Jackson, who confirmed that he had acclaimed Hitler as a “very great man” who “rose Germany up from nothing.”

Farrakhan, who heads the Nation of Islam group, offered his assessment of the Fuhrer in a March II nationwide radio broadcast. It was largely overlooked then because in the same broadcast he urged Blacks to ostracize a Black reporter, Milton Coleman, who disclosed in The Washington Post that Jackson had referred to Jews as “Hymies” and to New York City as “Hymietown.”

‘HITLER WAS A VERY GREAT MAN’

In his March II broadcast, the Chicago Tribune quoted Farrakhan as saying: “Here, the Jews don’t like Farrakhan, so they call him Hitler. Well, that’s a good name. Hitler was a very great man. He wasn’t great for me as a Black person, but he was a great German, and he rose Germany up from the ashes of her defeat by the united force of Europe and America after the first world war.

“Now, I’m not proud of Hitler’s evils against the Jewish people. But that’s a matter of record. He rose Germany up from nothing. Well, in a sense you could say there’s a similarity in that we’re rising our people up from nothing. But don’t compare me with your wicked killers.”

Subsequent threats against Jews if they harmed Jackson and against the physical safety of Coleman and his family, propelled Farrakhan into national prominence because of his close association with Jackson’s campaign for the Democratic Presidential nominetion. Jackson has dissociated himself from Farrakhan’s remarks but has refused to reject his support.

Schindier added, “I pray that Rev. Jackson will use this latest wild and irresponsible statement by his supporter, Louis Farrakhan to at last publicly dissociate himself from Mr. Farrakhan and the dangerous demagogy he represents.”

Julius Berman, chairman of the Conference of Presidents of Major American Jewish Organizations, said: “If Mr. Farrakhan plans to do for the Black people what Hitler did for the German people, he is an even greater menace to our country, to American Blacks and to the cause of racial justice and racial amity than he has already shown himself to be.

“Calling Hitler a ‘great man’ — even ‘wickedly great’ — is simply obscene. The sooner Black leaders and especially Jesse Jackson repudiate Mr. Farrakhan and his kind of thinking, the better off all Americans will be.” Farrakhan, at a press conference here yesterday, accused the media of distorting his remarks but insisted that Hitler could be called “great” in the context of history. “I don’t think you would be talking about Adolf Hitler 40 years after the fact if he was some miniscule crackpot that jumped up on the European continent. He was, indeed, a great man, but also wicked. Wickedly great,” Farrakhan said.