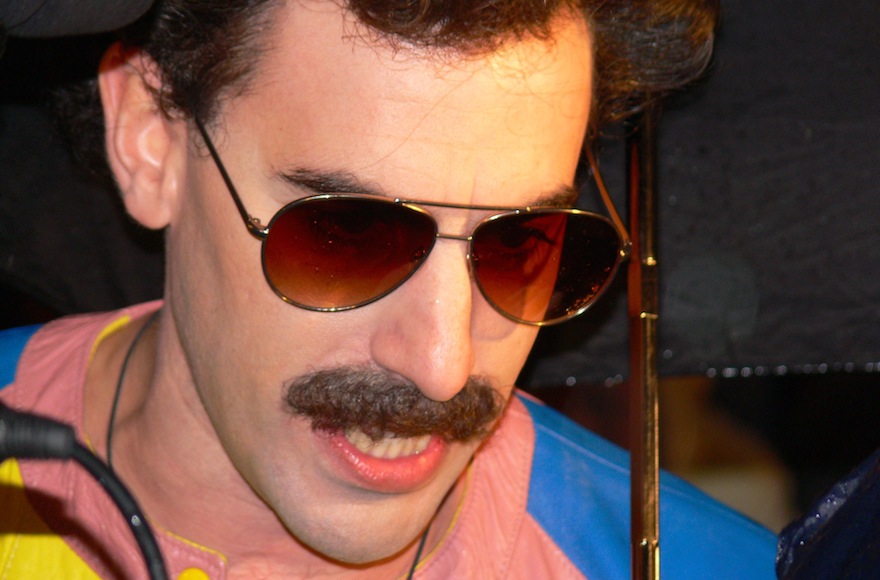 LOS ANGELES, Nov. 6 (JTA) — Judging from the early box-office returns and the howls of laughter coming from those watching, British Jewish comedian Sacha Baron Cohen’s new “Borat” film scores a direct hit on the audience’s funny bone. Yet in all the glowing reviews of the film in major newspapers and magazines, only a couple of Jewish reporters got the supreme jest — that the Jew-bashing Borat frequently speaks in Hebrew. For instance, when Borat takes leave of his home village, he tells a one-armed peasant, “Doltan, I’ll get you a new arm in America,” according to the subtitles translated from “Kazakh.” What he actually says is, “I’ll buy you some kind of a new arm” — in Hebrew. Borat also sings the lyrics from an old Hebrew folk song, and identifies his country’s greatest scientist, who discovered that a woman’s brain is the same size as a squirrel’s, as “Dr. Yarmulke.” Baron Cohen’s Hebrew is excellent, thanks to an Israeli mother of Iranian descent, a year spent at Kibbutz Rosh Hanikra and his early membership in the Habonim Dror youth movement. To top it off, the 35-year-old played Tevya in “Fiddler on the Roof” while attending Cambridge University. There are some real knee-slappers as Borat Sagdiyev, a faux Kazakhstani television reporter, makes his way across America in an ice cream truck. But the biggest laugh must be reserved for Baron Cohen and the folks at 20th Century Fox as they schlep the box office receipts to the bank. “Borat: Cultural Learnings of America for Make Benefit Glorious Nation of Kazakhstan” earned an astonishing weekend gross of $26.4 million, easily beating second-ranked “The Santa Clause 3,” which opened in four times as many theaters. The mock documentary also topped the charts in six European countries, including Baron Cohen’s native Britain. In his travels across the United States, the wide-eyed, mustachioed Borat encounters, and generally makes fools of, a cross-section of unsuspecting natives. His hapless foils include humor and etiquette coaches, Washington politicians, feminists, gays, Pentecostal revivalists, drunken frat boys, blacks, rednecks at a rodeo, a car salesman and the owner of an antiques store. But Borat’s favorite targets are Jews, and he plays the true believer of Jewish conspiracy theories to the hilt. He refuses to fly from New York to Los Angeles, for instance, for fear the Jews will hijack his plane, “as they did on 9/11.” His Jew-phobia is so over the top, so wacky, that it’s doubtful that even an assembly of ayatollahs would take it at face value. There’s a bit more shock value in some pretty gross scenes, including a highly graphic nude wrestling match between the hairy Borat and his obscenely fat producer. In another, Borat presents a bag of feces to a Southern society lady. The screening was punctuated by a lot of laughs, and a few squeals, but at about the same volume as the ones that greeted a trailer of coming attractions about a bunch of klutzy cops. In one Los Angeles neighborhood, Darius Moghadan attended with his wife and 15-year-old son, Arash. They thought the movie was funny and weren’t put off by the wrestling and feces scenes. Most of his friends would probably see the film, Arash said, because “everyone enjoys watching fools.” Apparently the shock waves anticipated by critics did not fully kick in, perhaps because in the preceding weeks Borat’s nonstop appearances on television and radio shows, and excerpts from the movie readily available on the Internet, had given viewers a solid idea of what was to come. We can expect to see a great deal more of Baron Cohen, if not as Borat then as two of his alter egos — Ali G, a dim-witted London rapper, and Bruno, a gay Austrian fashionista.