Eisenhower Reveals His 1957 Aims to Penalize Israel on Sinai Issue 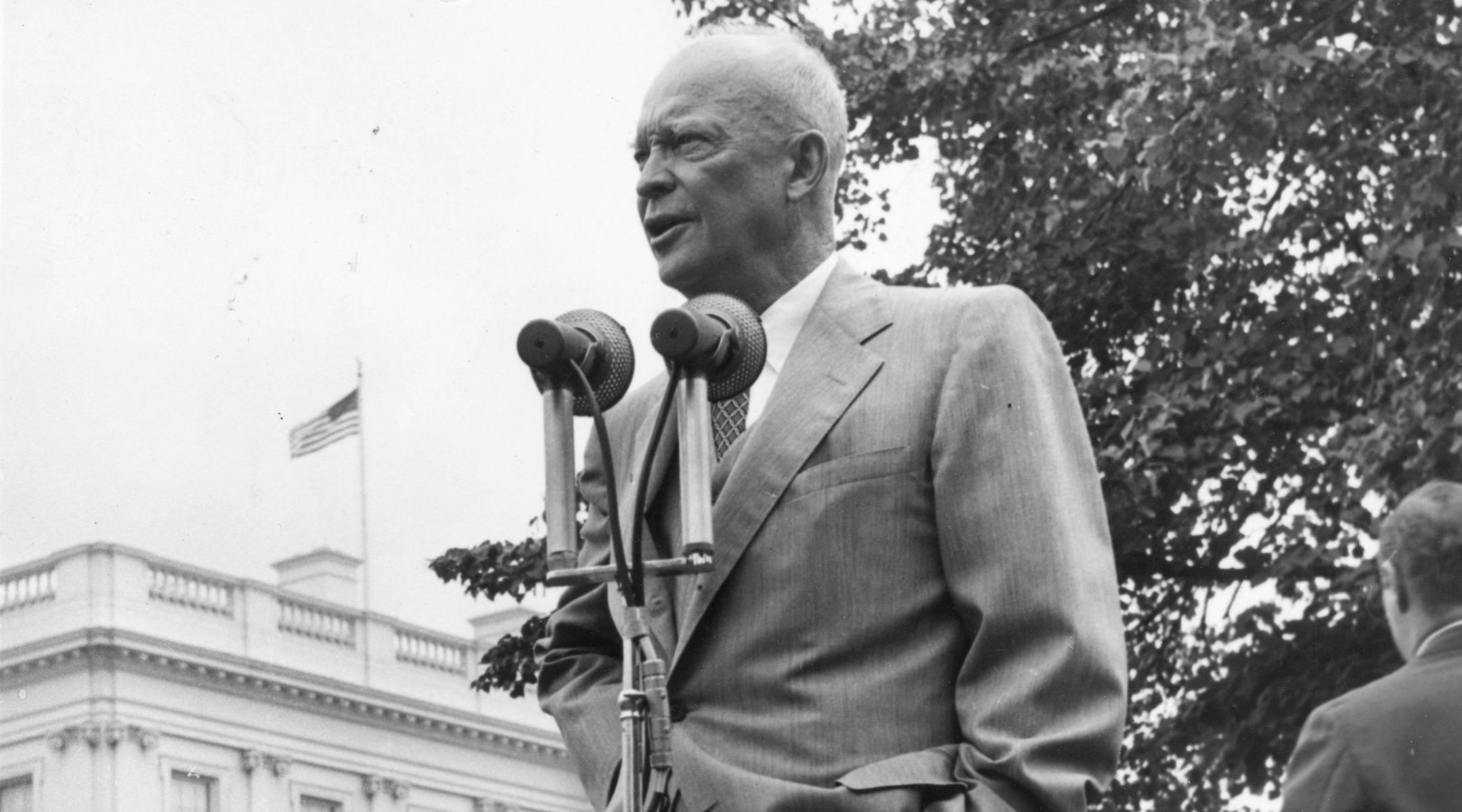 Former President Eisenhower has revealed in his new book, “The White House Years: Waging Peace 1956-1961,” that, in order to pressure Israel into withdrawal from the Sinai in 1957, he preferred “a resolution which would call on all United Nations members to suspend not just governmental but private assistance to Israel.”

Mr. Eisenhower said “such a move would be no hollow gesture. As we discussed it, George Humphrey, then Secretary of the Treasury, put in a call to W. Randolph Burgess, Under Secretary of the Treasury for monetary affairs, who gave a rough estimate that American private gifts to Israel were about $40, 000, 000 a year and sales of Israel bonds in our country between $50, 000, 000 and $60, 000, 000 a year. His information was in part based on Treasury figures on income tax deductions.”

Mr. Eisenhower revealed that Secretary of State John Foster Dulles “strongly expressed the view that we had gone as far as possible to try to make it easy for the Israelis to withdraw. To go further, he said, would surely Jeopardize the entire Western influence in the Middle East, and the nations of that region would conclude that United States policy toward the area was, in the last analysis, controlled by Jewish influence in the United States. In such event, the only hope of the Arab countries would be found in a firm association with the Soviet Union.”

A charge was made by the former President that Congressional leaders who met with him on the Israeli withdrawal issue were motivated by “politics.” He recalled that both Lyndon B. Johnson, then Senate Majority Leader, and William F. Knowland, then Minority leader, argued that, in “cracking down” on Israel we are using a double standard–following one policy for the strong and one for the weak.” They contrasted the Administration’s pressure on Israel with its failure to act strongly on Hungary.

(When President Eisenhower communicated his plan for sanctions against Israel to Senate leaders, the then Sen. Johnson called on Mr. Eisehower and bluntly informed him that the Senate would not approve economic sanctions against Israel. The outspoken Texan told the Eisenhower Administration that threats to impose sanctions on Israel were unwise and unfair, and that he was against “pressure on one side in a two-sided dispute.” Deploring the attempted “coercion” of Israel as a “method of settlement,” Mr. Johnson told the Eisenhower Administration it had lost sight of the basic facts in the Israel-Arab dispute.)

A White House staff member termed the meeting with the Congressional leaders “a can of worms,” Mr. Eisenhower said. He “reflected on the pettiness” of those reluctant to sanction Israel. He found it “somewhat disheartening that partisan considerations could enter.” The “question of principle,” in Mr. Eisenhower’s thinking was: “Should a nation which attacks and occupies foreign territory in the face of United Nations disapproval be allowed to impose conditions on its own withdrawal?”