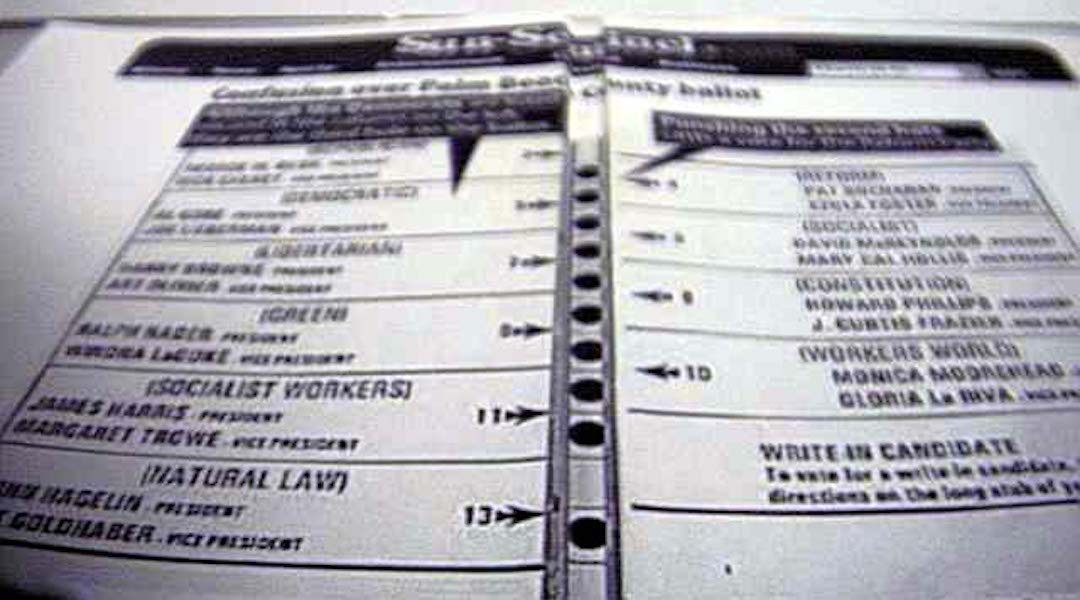 A simulation of the ballot that caused controversy in Florida in 2000. (Wikimedia Commons)
See Original Daily Bulletin From This Date
Advertisement

Jewish officials in Florida and around the country are monitoring the election controversy in the Sunshine State, as many Jewish voters say they mistakenly chose the wrong candidate.

Although a recount began Wednesday in Florida, many people are looking beyond to the thousands of ballots that were excluded in Palm Beach County, which is heavily Jewish and Democratic, as well as several thousand votes for Reform Party candidate Pat Buchanan.

Jewish officials in that area said they believe a confusing ballot may have led voters to pick Buchanan when they wanted to choose Vice President Al Gore, or to vote for both candidates by mistake.

“This entire election is now focused on a retired little old lady in Century Village in Boca Raton who cast the wrong ballot,” said Jan Lederman, executive director of the Sarasota-Manatee Jewish Federation.

Lederman said his organization has received calls from voters and has been assisting in getting them in contact with state officials.

More than 19,000 ballots were thrown out in Palm Beach County. With the recount indicating by Thursday afternoon that fewer than 400 votes divided Gore and George W. Bush in that state, those excluded ballots could make a difference in who won the state.

Observers for both major presidential candidates are in Florida, meeting with election officials and watching the state’s recount. There is precedent for a state judge to adjust the voting in the election because of problems with the ballot, according to several sources, and lawsuits have already been filed on that issue.

The local Jewish federations are considering participating in lawsuits on behalf of their members, Lederman said, but will wait until the recount is concluded before making a formal decision.

Another remaining question is whether the numbers for Buchanan are correct in Palm Beach County.

The close to 4,000 votes for Buchanan trumps his showing in other counties in the state, and even Buchanan himself has said the votes are wrong.

The former Nixon White House aide is known in the Jewish world for, among other things, his anti-Semitic and anti-Israel comments.

Some Democratic officials, including Rep. Robert Wexler (D-Fla.), said holding a new election in that county or statewide is warranted, because of the confusion over who won that state and the 25 electoral votes that would put either candidate past the 270 he needs to win the presidency.

“It’s the only way we could rectify this situation,” said Jonathan Katz, Wexler’s legislative director.

While the recount was expected to be complete by late Thursday or Friday, it may be much longer before the situation in Florida is clear.

Overseas absentee ballots can still arrive for another seven days, and with a margin of only several hundred votes, they may swing the election as well.

But in the end, a judge will most likely have to sort out the issues in the state.

It may be a while before the next inhabitant of the White House is named.