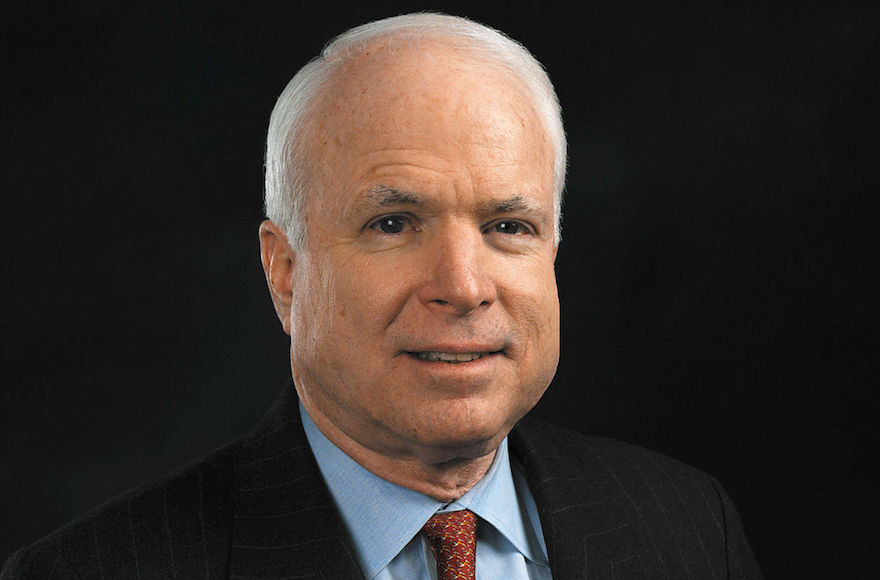 McCain made the comment Wednesday in an appearance before the Conference of Presidents of Major American Jewish Organizations, the first of a series of candidate forums the umbrella organization is hosting in the coming months.

“Throughout this campaign I’ve told people things they wanted to hear and things they have not wanted to hear,” McCain said. “I would not release Pollard. I believe he betrayed our nation and his obligations to our government. The evidence is abundantly clear.”

Jewish leaders said that while they disagreed, they were not surprised by McCain’s stance on Pollard. Some leaders gave him credit for being so straightforward.

“Of course” McCain’s position on Pollard is troubling, said Morton Klein, the president of the Zionist Organization of America. But, he continued, “on the other issues he’s taken the best position on Israel of any other candidate.” Klein praised McCain for “understanding the dangers of the dictatorships surrounding Israel better than any candidate.”

Toby Willig, the president of the Orthodox women’s group Emunah, said she disagreed with McCain on Pollard, but still believes he is a “very presentable candidate,” and praised him for being more detailed on his views than is Bush.

Speaking in a room at the UJA-Federation of New York building, McCain appeared relaxed, lacing his talk and the question-and-answer session with jokes about his experiences on the campaign trail, including his relatively low showing in the polls. His talk focused almost exclusively on foreign policy.

McCain also told the group that if he were elected president, he would “immediately” move the U.S. Embassy in Israel from Tel Aviv to Jerusalem.

He said he is cautiously optimistic about prospects for peace in the Middle East, although he is concerned about threats to Israel from Iraq and other rogue states.

“One of my greatest nightmares is Saddam Hussein has chemical weapons on a Scud missile pointed at Israel and then makes certain demands,” he said. “I’m convinced that as long as Saddam Hussein is in power, he will be a threat to Israel.”

McCain is trailing Bush in the polls, and it is unclear what support he — or other presidential candidates — have at this point from Jewish voters, who traditionally have favored Democrats. The night before his Conference of Presidents appearance, McCain attended a New York fund-raiser hosted by Edgar Bronfman Jr., chairman and CEO of Seagram, and the son of Seagram chairman and Jewish philanthropist Edgar Bronfman.

“I think people were impressed by his knowledge of the issues,” said Malcolm Hoenlein, the executive vice chairman of the Conference of Presidents. “He doesn’t pander and he answers straight.”

On other foreign-policy issues, McCain:

• Urged better foreign intelligence operations to prevent terrorism against the United States, but cautioned against violating the rights of American citizens;

• Would support a multibillion-dollar aid package to implement a peace deal between Syria and Israel;

• Identified as major threats to U.S. security the proliferation of nuclear weapons, the rise of radical Islamic fundamentalism, the emergence of China as a world power and the possibility of “information warfare,” in which terrorists disable major computer systems.