A party of some 150 seamen last night attempted to storm a Haifa jail and release 27 striking seamen of the S.S. Negba who were arrested earlier in the day when they resisted police efforts to break up their sitdown strike aboard the vessel. Eighty-eight other crewmen arrested on the Negba had been released before the attempt on the jail.

A number of policemen and sailors were injured in the melee in front of the jail. The attack on the lock-up came at the height of a demonstration of striking maritime workers in the dock area.

Another demonstration was held by seamen and their supporters here last night, but the police made no attempt to interfere. At an earlier mass meeting at Beit Haam, speakers representing the union, which is engaged in a bitter dispute with the Histadrut, hinted that the seamen were prepared to return to their jobs.

A short but stormy exchange over the strike situation took place in the Knesset today when it was decided to debate the question of Israel’s merchant marine. Premier David Ben Gurion intervened in the exchange by calling the seamen’s strike “a criminal attempt by enemies of the state to sabotage the nation’s vital arteries. ” To this Mapam leader Moshe Sneh shouted: “You are the state’s number one enemy.” The Premier also said that “there was not and there is not a strike. The Government is doing everything in its power to activate the Navy and to mobilize those seamen eligible for national service. “ 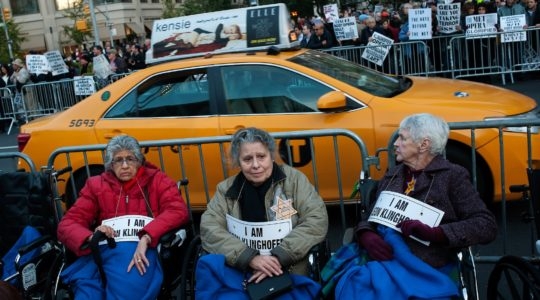 From the Archive: The funeral (and TV movie) of Klinghoffer

From the Archive: Laos, LAOS and anti-Semitism