Idan Raichel, an Israeli composer and multi-instrumentalist, works with singers and musicians from all over the world.

But Raichel’s new album breaks with his own rhythm. Instead of switching musicians every song (often enlisting 50-100 per album), he’s teamed up with a single other collaborator–the Malian guitar virtuoso Vieux Farka Touré.

The resulting album is an intimate collection that showcases both musicians. Raichel plays a simple piano; Touré plays acoustic guitar. Though the album is almost entirely wordless, the conversation between the two cultures feels eloquent and natural. Raichel plays a Sephardic-style melody, which Touré picks up and repeats in his guitar-picking. Then both musicians chant the melody together, in a sort of Hasidic nigun.

Curiously, this isn’t the first time that Jewish and Malian musicians have made headlines together–last year’s House of Friendly Ghosts album featured Brooklyn-based band The Sway Machinery and Malian singer Khaira Arby. Who knew that the two cultures made such a musical shidduch?

They Made A Paper Doll Outta Grandpa Bernie 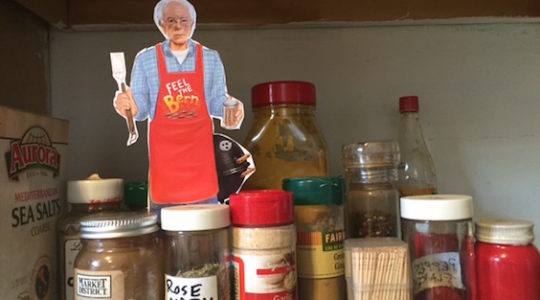