According to the Bible, Queen Esther saved the Jews of Persia from being wiped out by the evil Haman. But what happened to the Persian Jewish community after that?

“Light and Shadows: The Story of Iranian Jews,” a new exhibit at UCLA’s Fowler Museum, tells the rich history of one of the world’s oldest Jewish communities. The exhibit [video here], which debuted at Tel Aviv’s Beit Hatfutsot, traces a path through 3,000 years of Iranian Jewish history, all the way up to the 25,000 Jews living in Iran today.

Over a hundred objects, including archaeological artifacts, illuminated manuscripts, Judaica and amulets, paintings, and photographs demonstrate the long, complicated, and vibrant history of Iranian Jews. One amazing highlight is from the crypto-Jewish community of Mashhad, whose residents were forced to convert to Islam in the mid-1800s: a pair of miniature phylacteries, or tefillin, designed to fit beneath a man’s Muslim head-covering.

Here in America, where the majority of Jews are of Ashkenazi descent, it’s easy to forget that not all Jews come from shtetls. “Light and Shadows” is a fascinating way to learn about this important facet of the Jewish experience. The exhibit may yet come to other US museums, but plans are unclear. This winter could be a good time to book that trip to LA! 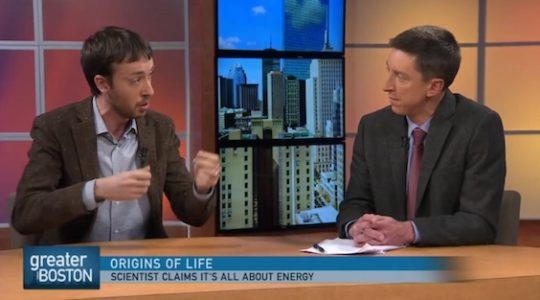