What makes a man? 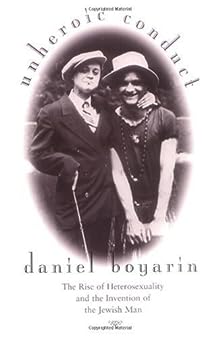 Today, the word “manly” suggests a specific picture, with bulging pectorals and an attitude. But according to Daniel Boyarin, an author and professor of Talmud at the University of California-Berkeley, that idea only came about in the Middle Ages, when notions of masculinity split into two ideals: scholarly, nerdy monks on one hand–and on the other, brawny, physical knights who were ideal marrying stock.

Boyarin’s book Unheroic Conduct: The Rise of Heterosexuality and the Invention of the Jewish Man suggests that, in the medieval Jewish mind, the nerdy scholar was actually the more “manly” one. In the larger culture, having a strong protector was important. Jews, however, thought it advantageous for one’s husband and father to be clever and thoughtful, rather than brawny and violent.

Do those beliefs continue in modern times? This week is “Dude Week” on Kveller.com. All week, the normally-mother-heavy blog will host guest bloggers, guy-type conversations, and put the whole notion of masculinity up for debate as everyone–of all genders–examines what it means to be a man in 2012.