Like many formerly gritty downtown districts around the world, Jerusalem’s is undergoing gentrification. Elegant buildings full of distinctive Ottoman-era or British Mandate-period architectural features are being torn down or gut-renovated, much to the dismay of history buffs and romantics alike.

Enter the Robbers’ Gallery, a guerilla preservation effort that’s become a home for the architectural and cultural detritus that would otherwise wind up in Israeli landfills. The Gallery, which occupies a series of interconnecting rooms inside a 19th-century apartment, feels like a cross between an architectural salvage yard and a museum.

Its most distinctive, and numerous, holdings are the dozens of handcrafted wooden window frames from bygone centuries, some still filled with pieces of the original stained glass, and carved with Stars of David. Founder Yoram Amir mounts the wooden castoffs on brightly painted walls, alongside photographs depicting the evolution of modern Jerusalem and poetry about the ancient city.

The sunlit rooms testifying to a vibrant and noisy past overlook Jaffa Road, with only the low rumble of the new Light Rail and shoppers’ multilingual chatter disturbing the quiet.

A Biblical Soap Opera Gets Its Primetime Debut
Stomping Through Warsaw in Search of the Past
How The Hobbit Learned Yiddish
Yiddish, Pig Skin, and Other Surprises in Jell-O’s Troubled Jewish Past 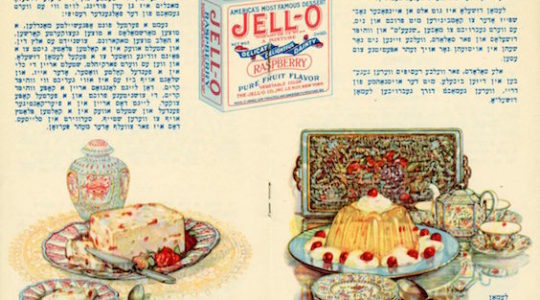