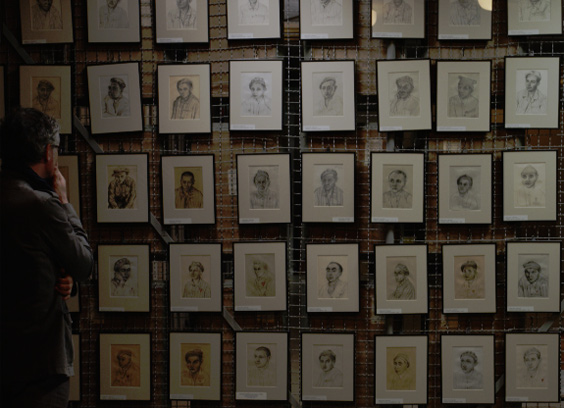 One of the most common drawings from a child (after stick figures) is a house with a chimney puffing curlicues of smoke. Because I Was A Painter features a lot of chimneys, but the smoke is heavy, and often drawn with dark scribbles or even faces melting into a mournful sky.

Because I Was a Painter is a documentary film by Christophe Cognet, which has been selected at multiple international film festivals, and is soon to be released nationally. It uncovers drawings that were hidden from the Nazis during the Holocaust. Drawn on bits of newspaper or the back of SS documents, these pictures hold details not only about what the camps looked like, but what it felt like to be inside. They are fascinating eyewitness accounts, and some of them are presented by the artists themselves.

The film also debates some profound questions about the role of art in preserving history. It interlaces images of the drawings and sculptures with survivor interviews, commentary from curators, and footage of the camps themselves. Seeing a photograph of Dachau next to a victim’s sketch of that same landscape is truly remarkable. It also opens up the idea of art and its curation as interpretive.

Because I Was a Painter is thoughtful and evocative. It’s for anyone who sees a puff of smoke, and wonders what stories it could hold.
____
» Watch a trailer of the film
» Discover a Holocaust survivor who credited music with saving her life
» See more from a graphic artist haunted by the Holocaust
» Learn about the Nazi’s exhibit of “Degenerate Art”
____

Watch a trailer of the film: