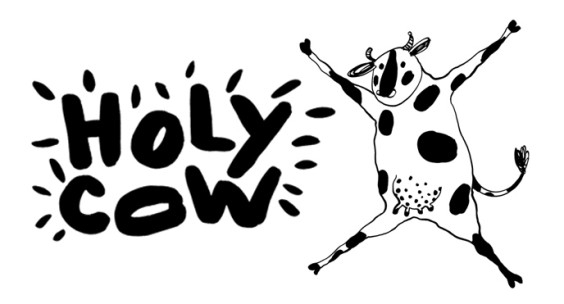 Maybe you first fell for David Duchovny as the DEA Agent in Twin Peaks. Or you tracked his every move in The X-Files as the steamily troubled Agent Fox Mulder.

Either way, it’s hard not to feel smitten all over again when you read his allegorical new book called Holy Cow. It’s a grim but hilarious look at how animals are eaten and revered, depending on your location. Duchovny looks a lot different from his X-File days. But his sly smile and tousled hair are still in place.

Duchovny calls Holy Cow “a fable for adults and children.” The bovine heroine, Elsie, lives on an upstate New York farm. When she figures out she’s about to get eaten, she starts plotting her escape to India where she’ll be seen as sacred. Word gets out about her plans and Jerry the Pig joins up. He also converts to Judaism and renames himself Shalom before planning his escape to Israel. And then there’s Tom the Turkey, who is certain he won’t be eaten if he gets to the country of Turkey. Only problem is, Tom is flightless.

All ham jokes aside, this book is a charming way to explore animal rights. You can’t help but cheer for the escapees. It’s in us too – the primal instinct to roam free.

» Buy your own copy of the book
» Watch Duchovny talk about the characters in Holy Cow.
» Find out if The X-Files is really coming back
» Join the movement for protecting animal rights


Watch some X-Files bloopers with David Duchovny and Gillian Anderson: