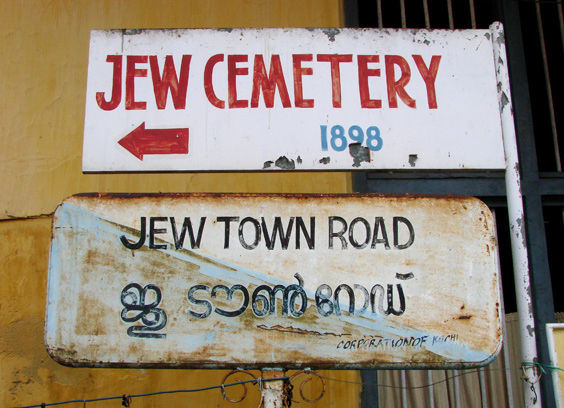 “Jew Town” may sound like a real estate agent’s neighborhood re-branding mistake, but it is–or was–a real place. In the Indian city of Kochi, it earned its clumsy but fitting nickname in the Middle Ages, when the Hindu Raja there offered Jews independent rule over a small area “for as long as the world and moon exist.”

The Jews of Kochi enjoyed good relations with Hindu rulers for most of their history there, and a number of Sephardi, or Paradesi Jews, came to Kochi to escape persecution in Portugal and Spain. They joined the oldest south Indian Jewish population, the Malabari Jews. Like Jews around the world, the Jews of Kochi soon blended their traditions with those of the dominant culture around them–out of respect to the Hindu population, they ate no beef, removed their shoes when entering houses of worship, and adopted a language that blended Hindi, Tamil, Hebrew, and Malayalam.

Still the center of the Kochi spice trade, Jew Town has lost most of its Jews to Israel since 1948–but the 450-year-old Paradesi synagogue still rises out of the bustle of spice and curio shops as a testament to the quarter’s Jewish history.

The Yiddish Writer and the Siberian Exile