The Jew Who Got the Ball Dropping on Times Square 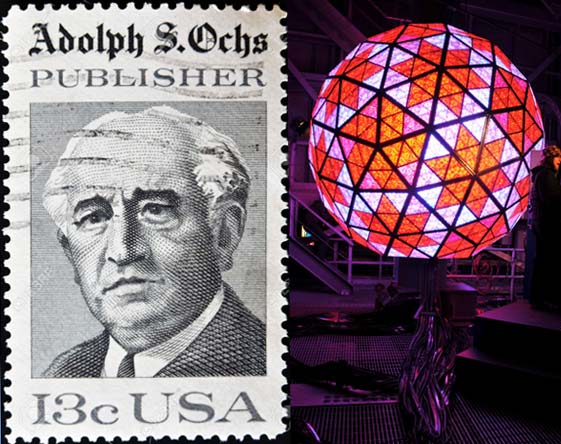 One million people are expected to cram into New York’s Times Square tonight to watch a giant crystal ball descend. One billion people will tune in from all over the world. The man who started the tradition was newspaper magnate Adolph S. Ochs. The son of German-Jewish immigrants, he began his career at 11 years old as an office boy at the Knoxville Chronicle. By 19 he was publisher of The Chattanooga Times and at 38 he purchased the struggling New York Times, instilling a focus on objective journalism (as opposed to the sensationalism of Pulitzer’s World and Hearst’s Journal).

After Ochs bought the Times in 1896, he moved its headquarters to the intersection of Broadway, Seventh Avenue and 42nd Street. In 1904 Ochs convinced Mayor George McClellan to rename the square after the paper. That New Year’s Eve, Ochs celebrated with a public fireworks show, in part to draw New Yorkers from their traditional gathering spot of Wall Street, where they listened to the chiming of bells at Trinity Church. But when, three years later, he was denied a fireworks permit, he hired sign maker Artkraft Strauss to build, and then lower, a 700-pound wood-and-iron ball. It was five feet across and covered in 100 light bulbs.

Ochs didn’t invent the time ball – they had been used since the early 1800s for synchronizing maritime clocks, and by 1907 they were fixtures in dozens of cities. But the Times Square Ball – which has ballooned to 11,875 pounds, 12 feet in diameter, and covered in 32,256 LED lights – is his unique legacy.