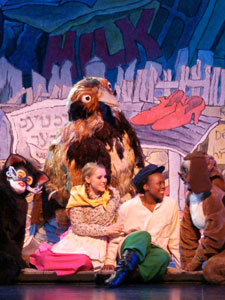 In 1938, Jewish Czech composer Hans Krása penned the children’s opera Brundibar—“bumblebee” in colloquial Czech—for a government competition. But it wasn’t exactly a good time for art.

Though early rehearsals took place at a Jewish orphanage in Prague, it wasn’t until Krása and all the orphans were deported to Theresienstadt in 1943 that the opera came into its own. There, Brundibar was performed 55 times, including a special performance in 1944 for Red Cross representatives who had come to survey the treatment of the inmates.

Shortly after, Brundibar was performed for the last time: the opera was filmed for a Nazi propaganda film, The Fuhrer Gives the Jews a City, after which the entire staff—children, musicians, director, and Krása himself—were deported to Auschwitz and gassed.

Nearly 60 years later, in 2005, famed playwright Tony Kushner revived Brundibar for an off-Broadway run. A full production, including Kushner’s own English libretto, and  beloved writer and illustrator Maurice Sendak‘s production design, along with Kris Stone, saw incredible reviews. Each performance was preceded by a short play, But the Giraffe, intended to softly contextualize the opera for attending children.

Kushner, with Sendak, even turned the Hansel and Gretel-esque opera into a gorgeous children’s book, all the more poignant considering the heaviness of its history.

Watch incredible footage of the original Theresianstadt production and a 2014 Australian staging:

Kill Me Twice, Shame on Me