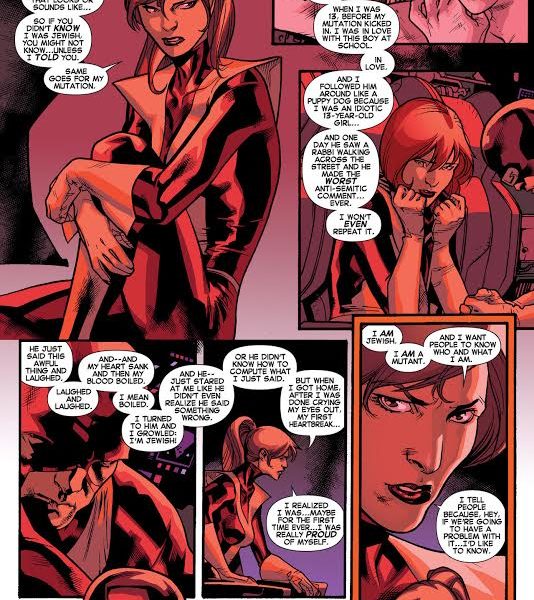 You are hated by groups of people worldwide. You assume powers when you turn thirteen. You go to a special school to learn about your heritage.

Are you a Jew, or a mutant?

Stan Lee and Jack Kirby, born Stanley Lieber and Jacob Kurtzberg, created the X-Men in 1963 as a metaphor for religious persecution and civil rights, but like their names, they kept the Judaism under wraps.

Twelve years later, Chris Claremont revitalized the faltering series and created backstories for characters like Magneto and Shadowcat that dealt specifically with Jewish struggles. They became ways to deal with the Holocaust and Zionism through parable.

Shadowcat, in conversation with time-traveling versions of Lee & Kirby’s original 1963 X-Men tackles assimilation and stereotypes, saying “I don’t look or sound Jewish. Whatever that looks or sounds like…” in the same breath as “I don’t have to wear a visor or have blue fur all over me.” Fighting for her identity on both sides brought her to the conclusion: “I am Jewish. I am a mutant. And I want people to know who and what I am.”

Some may hate and fear Jews and mutants, but with a strong will (and some cool powers) we will survive whatever is thrown at us.