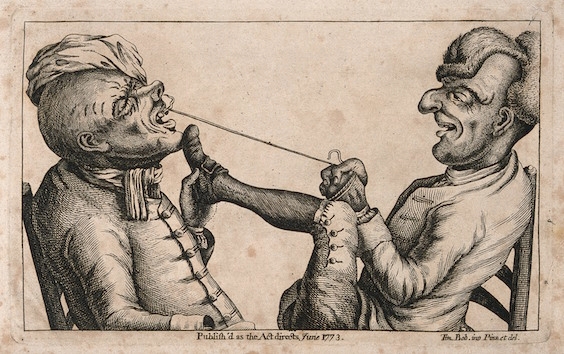 Between the 18th and 19th centuries, the British government deported over 150,000 convicts to penal colonies in Australia. Among them were two Jews named Joseph Hyams and Simon Lear, also known as Australia’s first dentists.

Hyams, who was born in London and sent to Sydney after being convicted for something in 1813, established himself as a practicing dentist and an expert extractor of corns “with ease and safety.”

Simon Lear arrived four years later. He, too advertised that he took care of corns, and also made “artificial teeth made in a most perfect manner and the teeth cleansed from the Scurvy and other Disorders and brought to a beautiful white.”

Though we don’t know what crimes Hyams and Lear were charged with, they were not certified dentists either. An article published in 1820 in the Sydney Gazette written by the Australian medical board, warned the public about these conmen from the West.

Hyams soon returned to crime and eventually died in a penal colony in Tasmania. But Lear thrived, expanding his business to include occult arts, and even officiating at some early Australian circumcisions — truly a renaissance medical man.

Lear left a more august legacy, too: When he died, he left his property to various Jewish trusts, which the Jewish community sold to help finance the Great Synagogue of Sydney, built on the shoulders of cavities and corns.

The Things We Left Unsaid