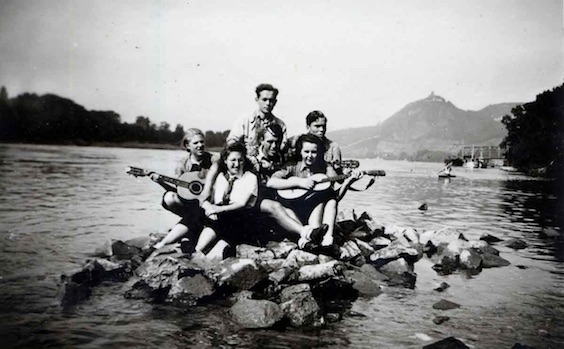 In a time of rising authoritarianism, xenophobia, anti-Semitism, and fear, a group of young people insisting on their freedoms expressed themselves through dance.

Donning checkered shirts, shorts and stockings, and signature edelweiss floral badges, this group of teenagers in Nazi Germany called themselves the Edelweiss Pirates.

They first organized in the late 1930’s in Germany, when anyone older than ten was being ordered to join the Hitler Youth and certain types of music and dance were being painted as a insidious, liberal influences. The Pirates rejected both the edict and the ban.

Large in number, they went by different names in different cities, and were collectively known for wanting to sing, dance, kiss and dress freely. As one of their songs said:

“Our song is freedom, love and life / We’re the Pirates of the Edelweiss.”

But these kids were not pacifist hippies.

As they gained members, their resistance spirit grew too. They beat up members of the Hitler Youth and covered train stations with anti-Nazi graffiti. Sometimes they gave shelter to escapees from concentration camps. When they were caught, punishment was sometimes deadly.

It took over 60 years to formally acknowledge these young heroes. (The 1993 movie Swing Kids commemorated a similar group of youngsters, the Swingjugend.) In 2005, a chief administrator of Cologne officially recognized the group as honorable resistance fighters. At the ceremony, there were four Pirates who performed their defiant songs from long ago – their voices still strong.

Watch a short tribute video to the Edelweiss Pirates here:

The Book of Tobit