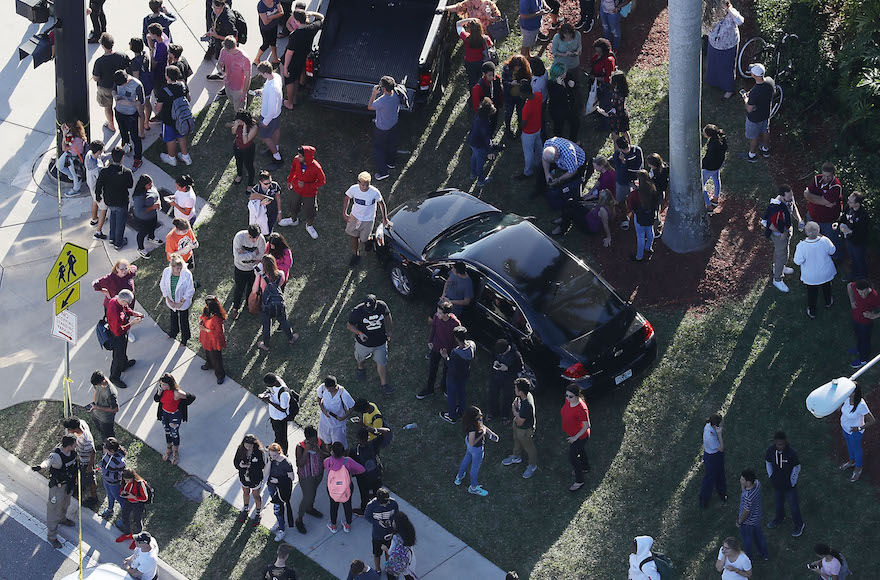 A look at the aftermath of the shooting at Marjory Stoneman Douglas High School in Parkland, Fla., Feb. 14, 2018. (Joe Raedle/Getty Images)
Advertisement

(JTA) — Two fathers of victims of the Parkland, Florida, school shooting and a former student who survived the attack will be guests of Congress members at the State of the Union address.

U.S. Rep. Ted Deutch, D-Fla., will host Manny Oliver, whose son Joaquin was killed in the Feb. 14, 2018 shooting at Marjory Stoneman Douglas High School, at the address on Tuesday night.

Oliver started the organization Change The Ref in the wake of the shooting by a former Parkland student that left 17 students and teachers dead. According to its website, the group gives students “the tools they need to be empowered to make changes to critical issues that affect our nation, through education, conversation, and activism,” including gun control and stopping gun violence.

Fred Guttenberg, father of Jaime Guttenberg, who was killed in the attack, and founder of Orange Ribbons for Jaime, will attend the address as a guest of House Speaker Nancy Pelosi, D-Calif. Guttenberg since the attack has been fighting for gun reform as a way to keep alive his daughter’s memory.

Cameron Kasky, 18, who survived the attack, will attend the address as a guest of Rep. Eric Swalwell, D-Calif. Kasky is a co-founder of the Never Again MSD group, a Parkland student-led political action committee for gun control that advocates for tighter regulations to prevent gun violence.