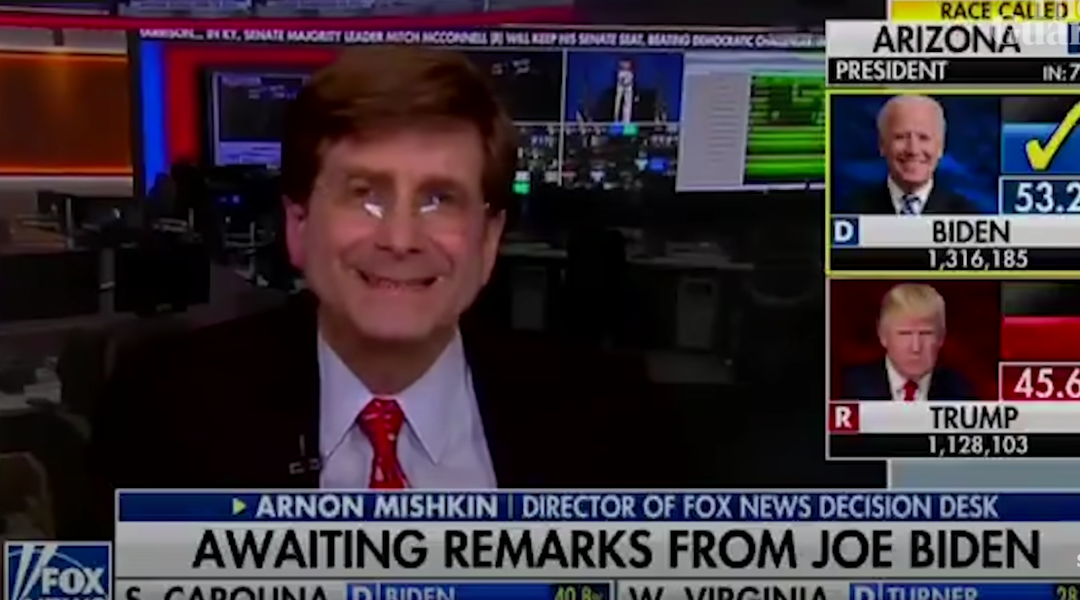 Fox’s call came so early, in fact, that the network’s anchors seemed surprised. President Trump was reportedly furious with his favorite network, and he criticized the decision in an early morning White House appearance, specifically dismissing “the gentleman who called it.”

That gentleman was Arnon Mishkin — a Jewish registered Democrat from New York who is the leader and face of the Fox numbers team.

Mishkin called that Arizona would go blue at around 11:30 p.m. Eastern time. At around 12:30 a.m., he appeared on air, and Fox host Bret Baier pushed him to declare that he was “100%” certain about his call.

“Absolutely. We made it basically after a half hour of debating ‘is it time?'” Mishkin said.

The call injected life back into the Biden campaign, which was reeling as it watched tallies in swing states such as Ohio and Florida grow insurmountable Trump leads. Other networks would call Arizona for Biden hours later. (Some have not yet, and Trump’s campaign is arguing he can still prevail there.)

Mishkin, 65, would seem an unlikely election analyst for the news network that has increasingly been associated with the Republican Party. A registered Democrat, both his parents were Holocaust survivors, as he detailed in a speech to his Upper West Side synagogue B’nai Jeshurun in 2001.

His father was the physics and engineering professor Eli Mishkin, whose obituary said he was the first person to receive a doctorate from the Israel Institute of Technology. His mother Esther volunteered at YIVO, the institute for Jewish research that preserves European Jewish history.

Tuesday night wasn’t the first time Mishkin angered Republican politicians tracking election night results. In 2012, after he called that Ohio would go for Barack Obama, Fox analyst Karl Rove disputed the claim. That prompted host Megyn Kelly to dramatically walk off set and into the room where Mishkin and his colleagues were at work. Mishkin said on camera that he was “quite comfortable” with his call. Obama would win Ohio.