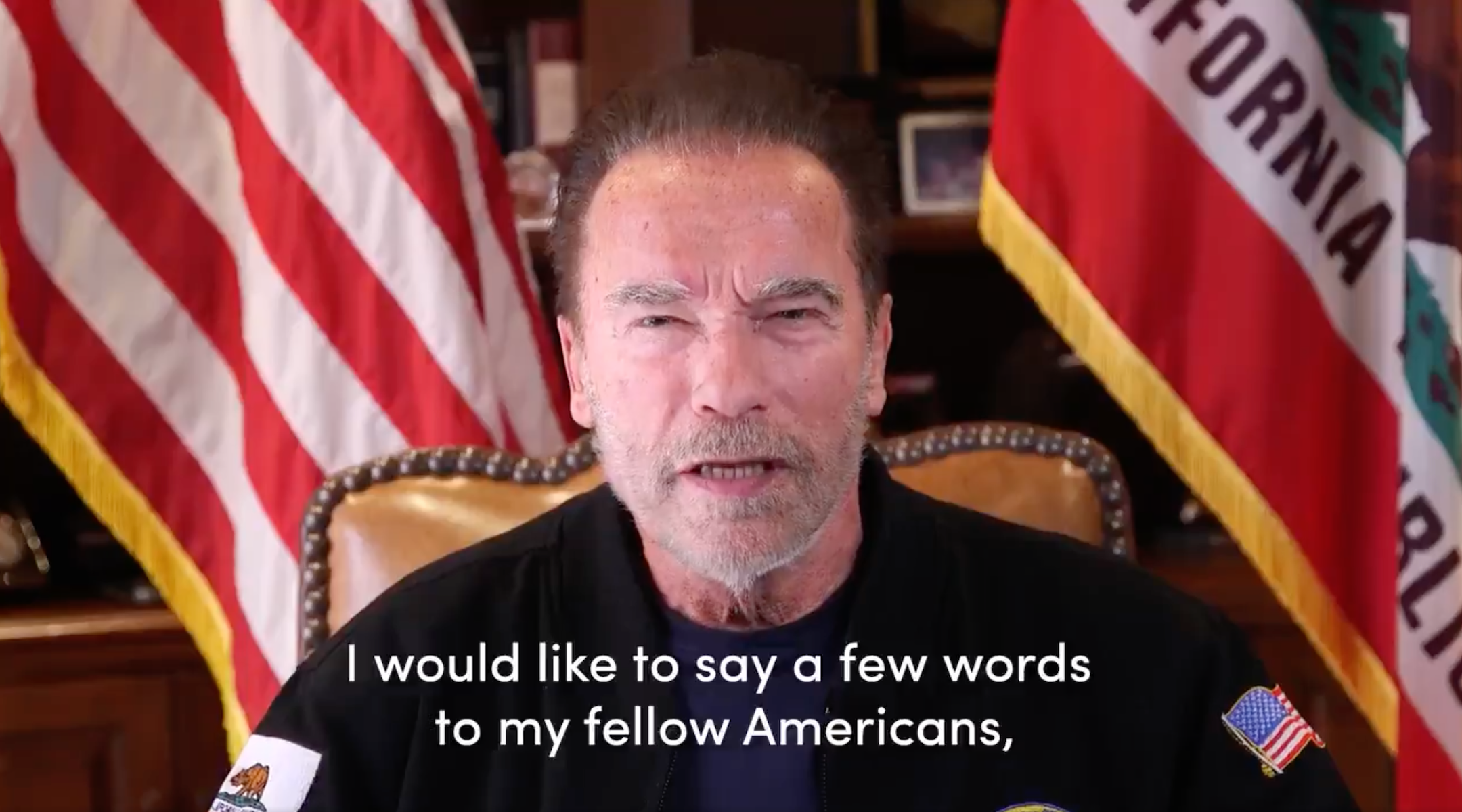 (JTA) — In an impassioned video, Arnold Schwarzenegger said the deadly mob violence in the U.S. Capitol last week recalled Kristallnacht, the Nazi attack on Jews that is considered the beginning of the Holocaust.

Schwarzenegger, the former Republican California governor and actor, posted the video to social media on Sunday and framed his remarks as coming from “an immigrant to this country.”

He began by describing Kristallnacht, the “Night of Broken Glass” — a 1938 Nazi pogrom across Germany and Austria, Schwarzennegger’s homeland. He described the stormtroopers who carried out the attacks on Jews and Jewish sites as “the Nazi equivalent of the Proud Boys,” the violent far-right group that backs President Donald Trump and that Trump has encouraged.

Marauders on Wednesday raided and looted the Capitol after Trump called on them to march on the building to protest Congress affirming that President-elect Joe Biden had won the election. Trump has for months peddled the falsehood that Biden won by fraud. Some of the mob sought out lawmakers who were in hiding, and broke through windows to enter the Capitol. At least five people died as a result of the raid.

The Capitol mob included people who bore anti-Semitic and racist symbology, though there is no evidence that it was specifically anti-Semitic in its intent.

“They did not just break down the doors of the building that housed American democracy,” Schwarzenegger said. “They trampled the very principles on which our country was founded.”

Schwarzenegger also recalled disturbing memories from his Austrian childhood that stemmed from the Nazi era. He spoke about growing up in post-war Austria surrounded by “broken men” driven to drink by guilt at having enabled the Nazis. He described his drunk father terrorizing his family with verbal and physical abuse.

Schwarzenegger, as his career was taking off in the 1990s, asked the Simon Wiesenthal Center to research his father’s background. It found that his father had been a member of the Nazi Party but had not participated in its atrocities.

“It all started with lies, and lies and lies, and intolerance,” Schwarzenegger said in the video, describing the Nazi era.

“President Trump sought to overturn the results of an election, and of a free election. He sought a coup by misleading people with lies,” Schwarzenegger said. “I know where such lies lead. President Trump is a failed leader. He will go down in history as the worst president ever.”

Schwarzenegger called on fellow Republicans to disown Trump, and to support Biden. “We need public servants who will serve higher ideals,” he said.