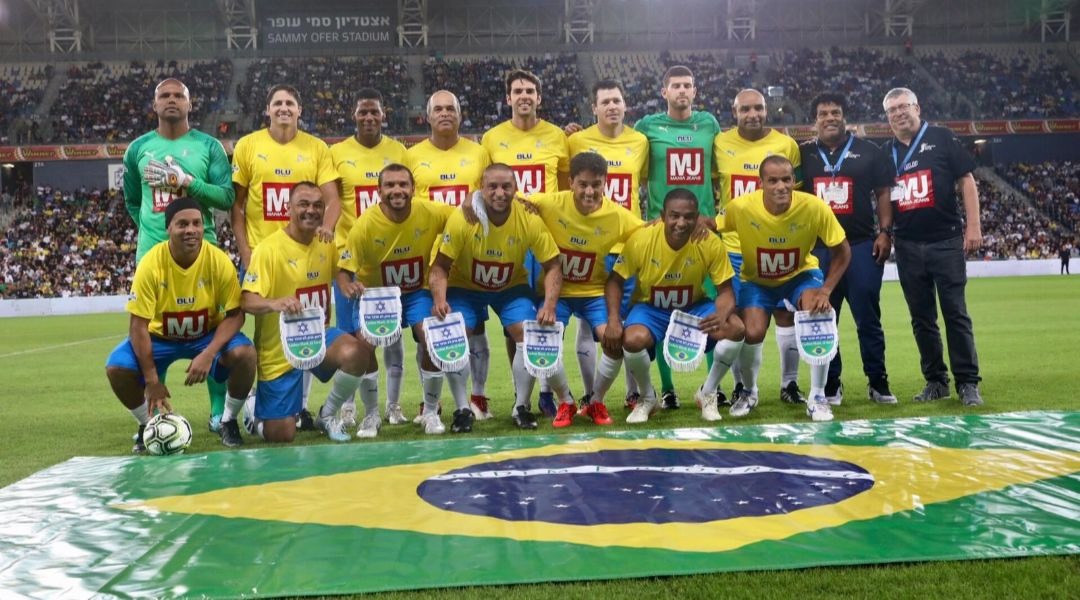 The Brazilian squad of acclaimed retired soccer stars at Sammy Offer Stadium in Haifa prior to the "Shalom Game" against reitred Israeli soccer stars on Oct. 29, 2019. (Courtesy of MTR7)
Advertisement

Some 28,000 fans saw Brazilian veterans beat their Israeli counterparts, 4-2, at the Shalom Game held Tuesday in the mixed Jewish and Arab city of Haifa, in northern Israel.

“The goal is to spread the values of soccer. We know it can unite peoples and even neutralize situations of conflict,” Brazilian former attacking midfielder Kaka, or Ricardo Izecson dos Santos Leite, told reporters.

Among the other 13 Brazilian legends on the field were Ronaldinho, Bebeto, Roberto Carlos, Rivaldo, Cafu, Emerson, and Cesar Sampaio, who have all won World Cup titles and other accolades. Israeli stars included legends such as Arik Benado and Yaniv Katan.

“Bringing together such influential global figures of the past and present proves that Israel is part of the world map,” Brazilian-born Mauro Rozenszajn, CEO of the Israeli company organizing the event, MTR7, told the Jewish Telegraphic Agency.

A photo with the Haifa skyline posted Monday by Ronaldinho, perhaps the biggest Brazilian star at the match, drew millions of likes from his nearly 70 million followers on Twitter and Instagram.

On the eve of the match, the Brazilian players visited the Western Wall in Jerusalem and children at the Rambam hospital in Haifa.

Brazil is the only five-time winner of Soccer World Cup titles and the only country that has qualified for every cup competition. Israel is home to some 15,000 Brazilians and an average of 700 members of Brazil’s Jewish community of about 120,000 move to Israel every year.