Britain’s leading Jewish newspapers to shutter as consequence of coronavirus 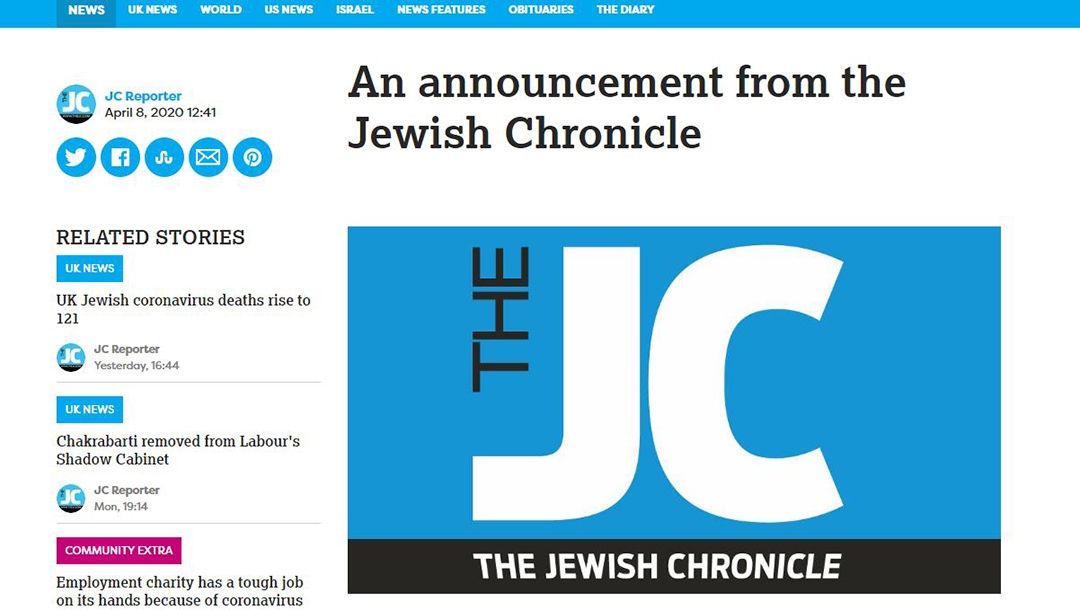 A screenshot of the Jewish Chronicle announcement on its liquidation on April 8, 2020.
Advertisement

(JTA) — Both of Britain’s leading national-circulation Jewish newspapers, The Jewish Chronicle and The Jewish News, are being liquidated.

The staff of both papers will be laid off because their parent company, the Kessler Foundation charity, has run out of money due to the economic effects of the coronavirus pandemic, The Guardian reported Wednesday.

The Jewish Chronicle was established in 1841 and is Britain’s oldest-running Jewish newspaper. It is listed on LinkedIn as having about 50 employees. The Jewish News has six people listed as its journalists.

“With great sadness, the Board of the Jewish Chronicle has taken the decision to seek a creditors voluntary liquidation of Jewish Chronicle Newspapers Ltd,” the newspaper announced Wednesday on its website.

The Kessler Foundation is “actively working to secure a future for the Jewish Chronicle after the liquidation,” its statement said.

Despite “the heroic efforts of the editorial and production team at the newspaper, it has become clear that the Jewish Chronicle will not be able to survive the impact of the current coronavirus epidemic in its current form.”

In February, the Jewish Chronicle and the Jewish News agreed to merge to secure the financial future of Jewish media in the United Kingdom.

The announcement came on the eve of Passover, a holiday for which employees of many Jewish businesses receive gifts.

The Jewish media have been struggling for years in the United Kingdom and beyond, but the coronavirus crisis caused a collapse in print sales and advertising revenue, the Guardian wrote.