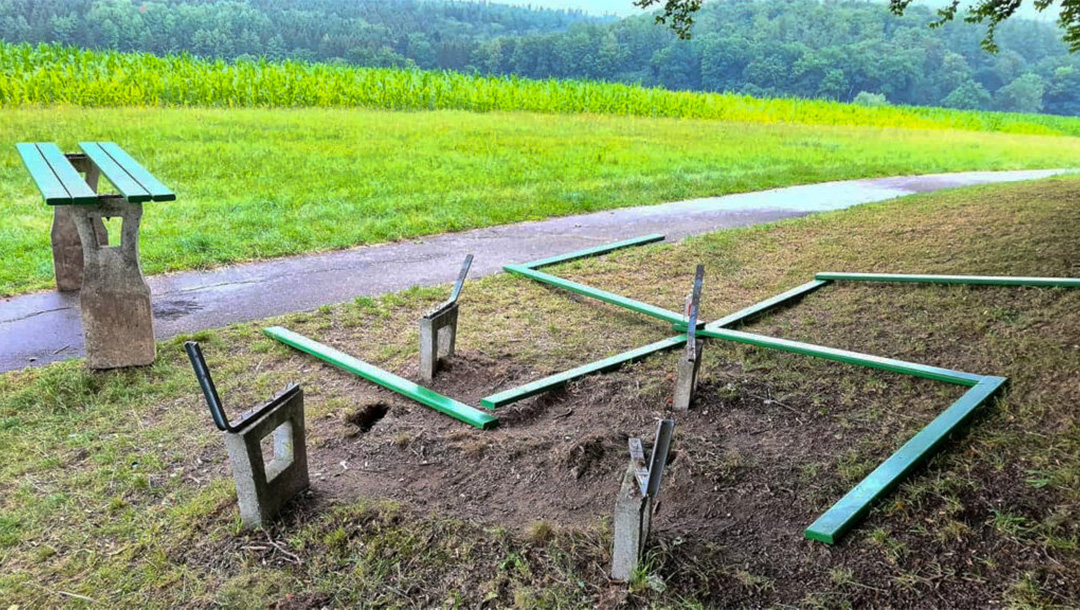 Parts of a vandalized picnic table arranged in the shape of a swastika near the Jewish cemetery of Krumbach, Germany, in 2020. (AllgaeuRechtsaussen)
Advertisement

(JTA) — Vandals struck a synagogue gate in Bulgaria and a monument to the victims of the shooting attack last year near a synagogue in Halle, Germany, in a spate of unrelated incidents this week in Europe.

In Bulgaria, the words “Free Palestine Israel=Nazis Antifa Bulgaria” were spray-painted Wednesday on the gate to the synagogue of Plovdiv, a city situated about 100 miles southeast of Sofia the capital, the Jewish organization Shalom wrote on Facebook.

In Halle, a Plexiglas panel on the monument of the shooting was smashed. The vandals also tried to set fire to a flag of Israel under the Plexiglas, the Jewish Community of Halle wrote Tuesday on Facebook.

A 28-year-old far-right extremist killed two people near the Halle synagogue in October 2019. He targeted a kebab shop and a passerby after failing to break through the synagogue’s armored door on Yom Kippur, when the synagogue was full of worshipers.

Police have no suspects in the vandalism cases.

In a third incident, a structure inside the Jewish cemetery of the town of Krumbach, in southern Germany, was damaged. Police are treating the vandalism as an anti-Semitic case because earlier this year, a nearby picnic table was dismantled and the wooden polls comprising it rearranged on the floor in the shape of a swastika, the website AllgaeuRechtsaussen reported Monday.

Also onday, metal thieves removed dozens of fences and railings from around tombstones at the Jewish cemetery of Babruysk in Belarus, the news Bobruisk.ru reported.