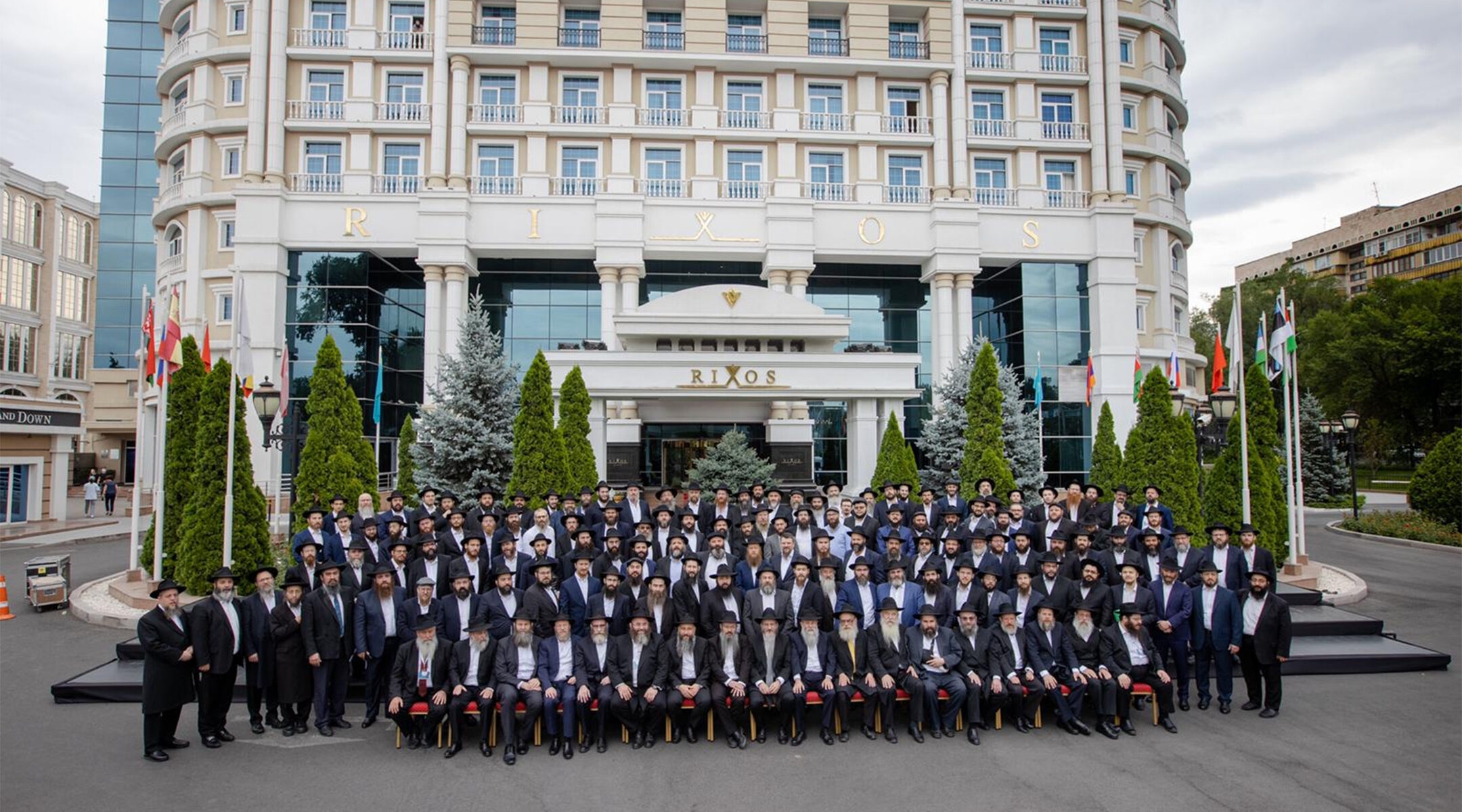 Chabad rabbis from across the former Soviet Union pose for a group photo in Almaty, Kazakhstan, July 29, 2021. (Yehezkel Itkin)
Advertisement

(JTA) — For Chabad-Lubavitch, major events aren’t over until they take a group photograph.

The tradition, covering the international Hasidic movement, creates much more than a souvenir. It has also generated a visual record of Chabad’s growth from a small group in the 18th century in what was then the Russian empire to a global movement with branches today in dozens of countries.

Last month in Kazakhstan, the photo opportunity yielded something else: a fine for violating rules against large gatherings during the COVID-19 pandemic.

More than 200 Chabad rabbis had convened in Almaty, the largest city in the Central Asian republic. Their picture taken outside the Rixos Hotel caught the attention of local authorities grappling with a worsening pandemic in a country where only about a quarter of the population is vaccinated. They issued a fine of about $200 to the Central Synagogue of Almaty for violating social distancing measures, the Kazinform news agency reported Monday.

Elchanan Cohen, the chief rabbi of the Almaty region, did not immediately reply to a request for comment by the Jewish Telegraphic Agency about the fine.

The gathering was significant for several reasons.

It marked the first official large-scale group photo for Chabad since the outbreak of the COVID-19 pandemic early last year. It also was the 77th anniversary of the death in Almaty of Rabbi Levi-Yitzchak Schneerson, the father of the movement’s last spiritual leader, Menachem Mendel Schneerson, and the first gathering since the Kazakh government added the gravesite of the elder Schneerson to its list of national heritage sites last year.

And the event brought together two rabbis who reportedly have an uneasy relationship: Berel Lazar, Chabad’s chief of operations throughout much of the former Soviet Union, and Yeshaya Cohen, the chief rabbi of Kazakhstan.

Local philanthropists in Kazakhstan have enabled Cohen to operate relatively independently from Lazar, who is based in Moscow but has a hand in Chabad’s work throughout the region. This dynamic has led to tension, according to multiple reports, and the fact that both men posed together added to the significance of the photo that signaled a return to normalcy, Zvika Klein, a journalist for Makor Rishon who specializes in Jewish world news, wrote on Twitter.

With 200 men on hand, the gathering was a far cry from previous reunions. More than 6,000 rabbis posed at the 2019 annual International Conference of Chabad-Lubavitch Emissaries — the last such event to date. (Last year’s conference was virtual and gave rise to a days-long online celebration.)

The record attendance in 2019 required Chabad photographer Mendel Grossbaum, who has perfected his group photo techniques over the years, to switch to an ultra-wide angle fisheye lens: The normal one could no longer capture everyone in front of Chabad headquarters in the Crown Heights section of Brooklyn.