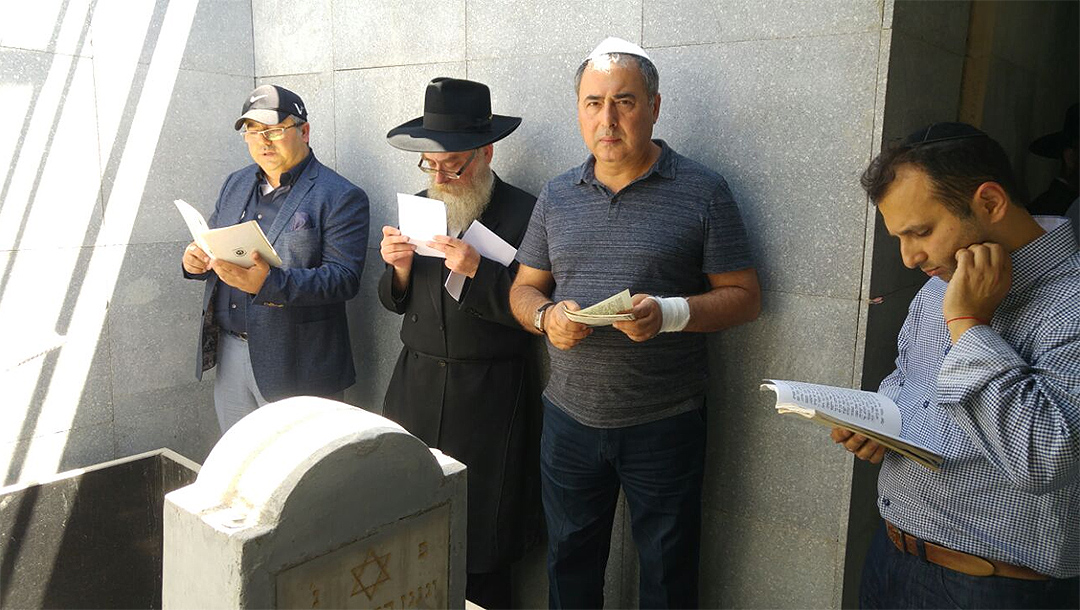 Men pray around the grave site of Levi Yitzchak Schneerson in Almaty, Kazakhstan in 2016. (Courtesy of Chabad Kazakhstan)
Advertisement

(JTA) — The government of Kazakhstan added the gravesite of Levi Yitzchak Schneerson, a leader of the Chabad-Lubavitch Hasidic movement, to its list of national heritage sites, a U.S. diplomat said.

Paul Packer, chairman of the U.S. Commission for the Preservation of America’s Heritage Abroad, announced the move during a visit to the gravesite in Almaty, where Schneerson was buried in 1944.

Schneerson, the father of the movement’s last spiritual leader, Menachem Mendel Schneerson, “fearlessly served as the chief rabbi of what is today the city of Dnepro in Ukraine” until he was arrested, tortured, jailed and sent into exile in 1939 by the repressive regime of Joseph Stalin, then the leader of the former Soviet Union, Packer said in a video posted Monday on Twitter.

The elder Schneerson died the 20th day in the Jewish calendar month of Av, which this year fell on Aug. 10. Thousands of pilgrims travel each year to his gravesite in Almaty, the largest city in the central Asian republic of Kazakhstan.

Levi Yitzchak Schneerson expected his exile in Kazakhstan to be a “period of darkness,” but was “warmly welcomed and quickly became leader of its Jewish community,” Packer said. His teaching and those of his son “continue to transform the lives of Jews around the world.”

Packer thanked President Kassym-Jomart Kemeluly Tokayev and other officials for “adding the holy rabbi’s grave to the national heritage list of Kazakhstan.”

Rabbi Levi Shemtov, the executive vice president of American Friends of Lubavitch (Chabad) who was named for Levi Yitzhak Schneerson, saw the naming as a tribute to Schneerson’s wife. “The Rebbe’s mother wrote in her diary many years ago, with pain, that she hadn’t yet seen appropriate recognition of her saintly husband,” said Shemtov, whose organization is based in Washington DC. “She knew his true greatness more than anyone, and actually made possible his deep Kabbalistic writings and their preservation.”