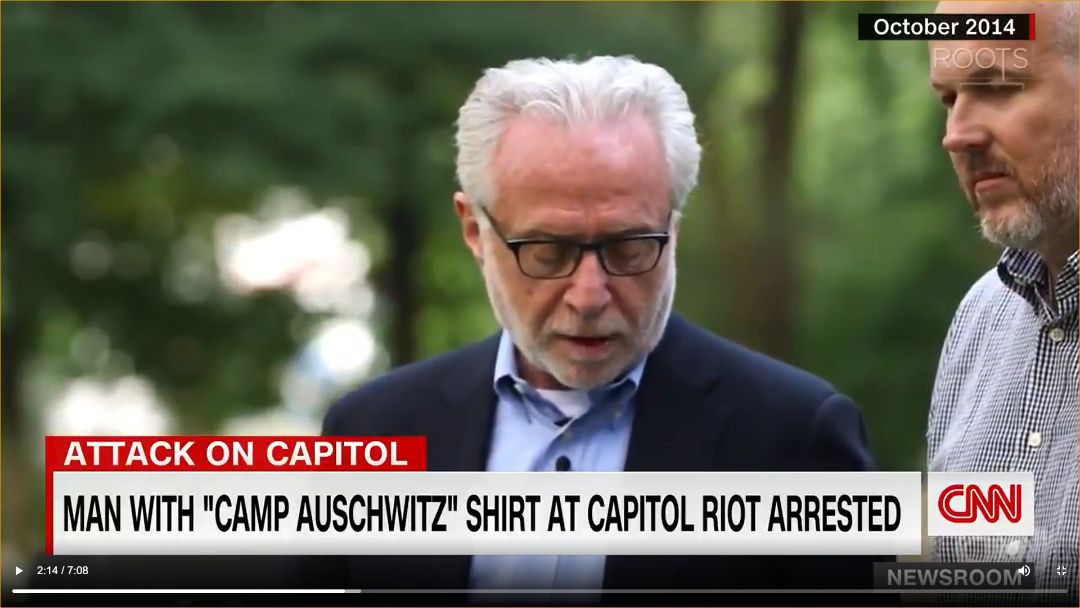 Wolf Blitzer says Kaddish at Auschwitz during a 2014 visit for a documentary. (Screenshot)
Advertisement

(JTA) — Longtime CNN anchor Wolf Blitzer said Thursday that he was happy that his late parents, survivors of the Holocaust, did not live to witness the resurgence of anti-Semitism in the United States — particularly in the wake of anti-Semitic symbology appearing at last week’s deadly Capitol riot.

“I’m happy that they’re not seeing what’s going on now in the United States,” Blitzer said after his cable news station screened video of his 2014 visit to Auschwitz, where his grandparents perished.

“It’s always hard for me to believe that in this country which gave my parents freedom” has witnessed such a resurgence, he said, naming events that occurred during the Trump presidency but not mentioning President Donald Trump.

“To a certain degree, I'm happy that [my parents are] not seeing what's going on here,” @WolfBlitzer tells @brikeilarCNN after a rioter wearing a "Camp Auschwitz" sweatshirt was arrested. Blitzer's grandparents were killed in Auschwitz.

"It was so painful for me to see." pic.twitter.com/HfUQ6dzXlW

Blitzer referred particularly to the rioter last week during the pro-Trump raid on the U.S. Capitol wearing a T-shirt emblazoned “Camp Auschwitz” and “Staff.” Photos of the man, who was arrested this week, have triggered traumatic episodes for Holocaust survivors worldwide.

“They were the most patriotic Americans I ever knew,” he said of his parents, who immigrated to Buffalo, New York, where Blitzer was raised. “It would have been so painful for them to see even these words ‘Camp Auschwitz.'”