Doug Emhoff wanted to tout the benefits of the stimulus package for small businesses. He chose a Jewish bagel joint. 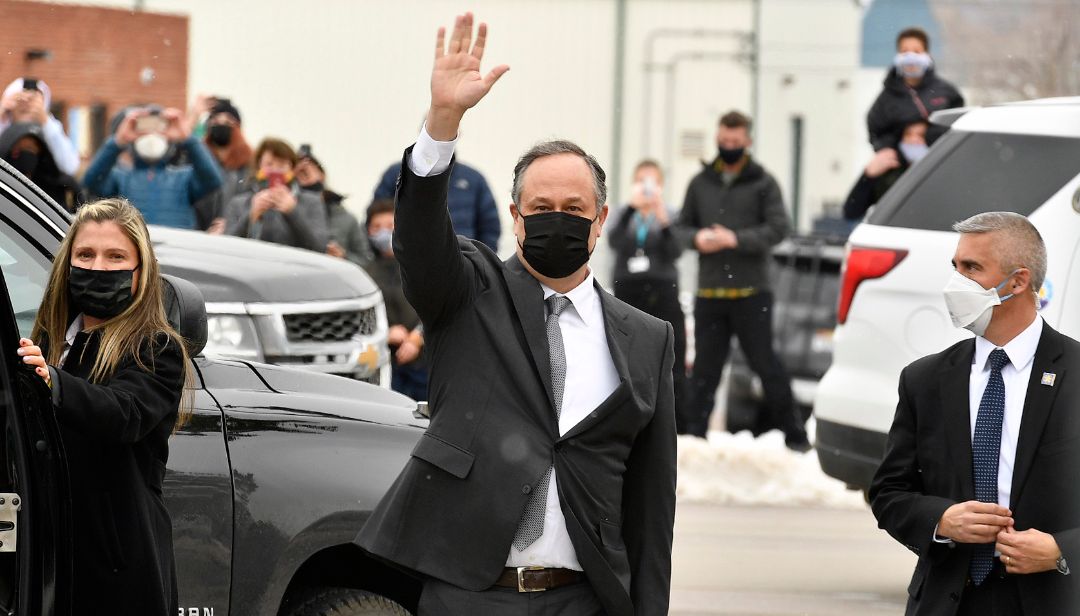 Doug Emhoff waves to the crowd as he leaves Maria Empanada at 1298 South Broadway street after taking part in a roundtable in Denver, March 16, 2021. He headed from there to a local Jewish bagel shop. (Helen H. Richardson/MediaNews Group/The Denver Post via Getty Images)
Advertisement

(JTA) — Doug Emhoff, the Jewish husband of Vice President Kamala Harris, is on a swing through Western states with his wife to promote the benefits of the $1.9 trillion stimulus package that the Biden administration just squeezed through Congress.

There was a stop at a food bank in Las Vegas and at businesses in Albuquerque, New Mexico. But when he hit Denver on Tuesday, Emhoff headed for a Jewish deli that featured large in a Rosh Hashanah message he delivered before November’s election.

“We were honored to have the Second Gentleman stop by our Five Points location today to talk small business relief (and of course, bagels & lox)”, the bagelry said on its Facebook page, which featured photos of Emhoff meeting with the store’s owner, Joshua Pollack.

Pollack launched his eatery in part after moving to Denver because he missed the Jewish food available in his native Bergen County, New Jersey. He has a specially made machine that converts water to New York mineral levels to replicate the gluten levels in New York-area bagels, and he offers Jewish holiday-specific foods: challahs on Shabbat, crown challahs on Rosh Hashanah and latkes on Hanukkah, among others.

Pollack, who campaigned in Denver for the election of President Joe Biden and Harris, was the star of an Emhoff Rosh Hashanah video in which he described his economic struggles during the pandemic. He also relayed to Emhoff, who was not in Denver at the time, a care package of Jewish foods, including bagels, honey and a crown challah.

“Couldn’t stop by Denver without visiting,” Emhoff said Wednesday on Twitter. “Josh and I met virtually last year and have kept in touch ever since. This pandemic has greatly impacted small businesses. The American Rescue Plan is now here to offer direct and immediate relief.”

Among the rescue package’s benefits, Emhoff and Harris on their Western tour are touting the grants and loans for small businesses, especially for restaurants.