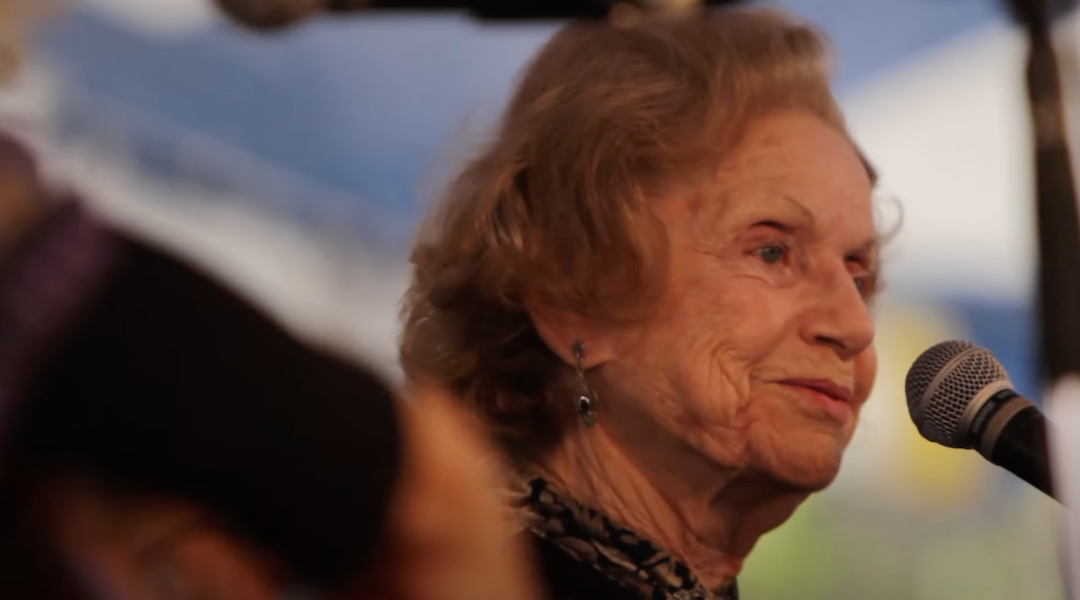 Flory Jagoda at the Richmond Folk Festival in 2012. (Screenshot from YouTube)
Advertisement

(JTA) — Flory Jagoda, the Bosnian-born Holocaust survivor who became a champion of Ladino and Sephardic music after immigrating to the United States, has died.

Jagoda died Sunday at an assisted living facility in Alexandria, Virginia, according to an obituary in The Washington Post. She was 97.

As a singer, songwriter and performer, Jagoda was widely celebrated for her efforts to preserve Ladino music and Sephardic culture, winning a prestigious National Heritage Fellowship from the National Endowment for the Arts in 2002. Her Hanukkah composition “Ocho Kandelikas” (“Eight Little Candles”), written in 1983 when Jagoda was 60 years old, has become a beloved holiday tune widely covered by other artists.

Born in Sarajevo in 1923, Jagoda grew up speaking Ladino, or Judeo-Spanish, the lingua franca of medieval Spanish Jewry. From her grandmother, she learned songs that were passed down in her family for generations.

In an interview with the U.S. Holocaust Memorial Museum, Jagoda recalled how her childhood music teacher declined to teach her anymore after the Germans arrived and forced the Jews to wear identifying yellow badges adorned with a “z.” When she arrived at her teacher’s home wearing the badge, the teacher told her she had to go away.

Jagoda and her family fled after the German invasion, landing in Italy, where she met and married an American soldier, Harry Jagoda. She moved to the United States in 1946 and eventually became a concert performer and lecturer. She also hosted a monthly gathering of Ladino-speaking Jews who shared traditional food and music.

Jagoda was predeceased by her husband and a son. She is survived by two daughters and a son.