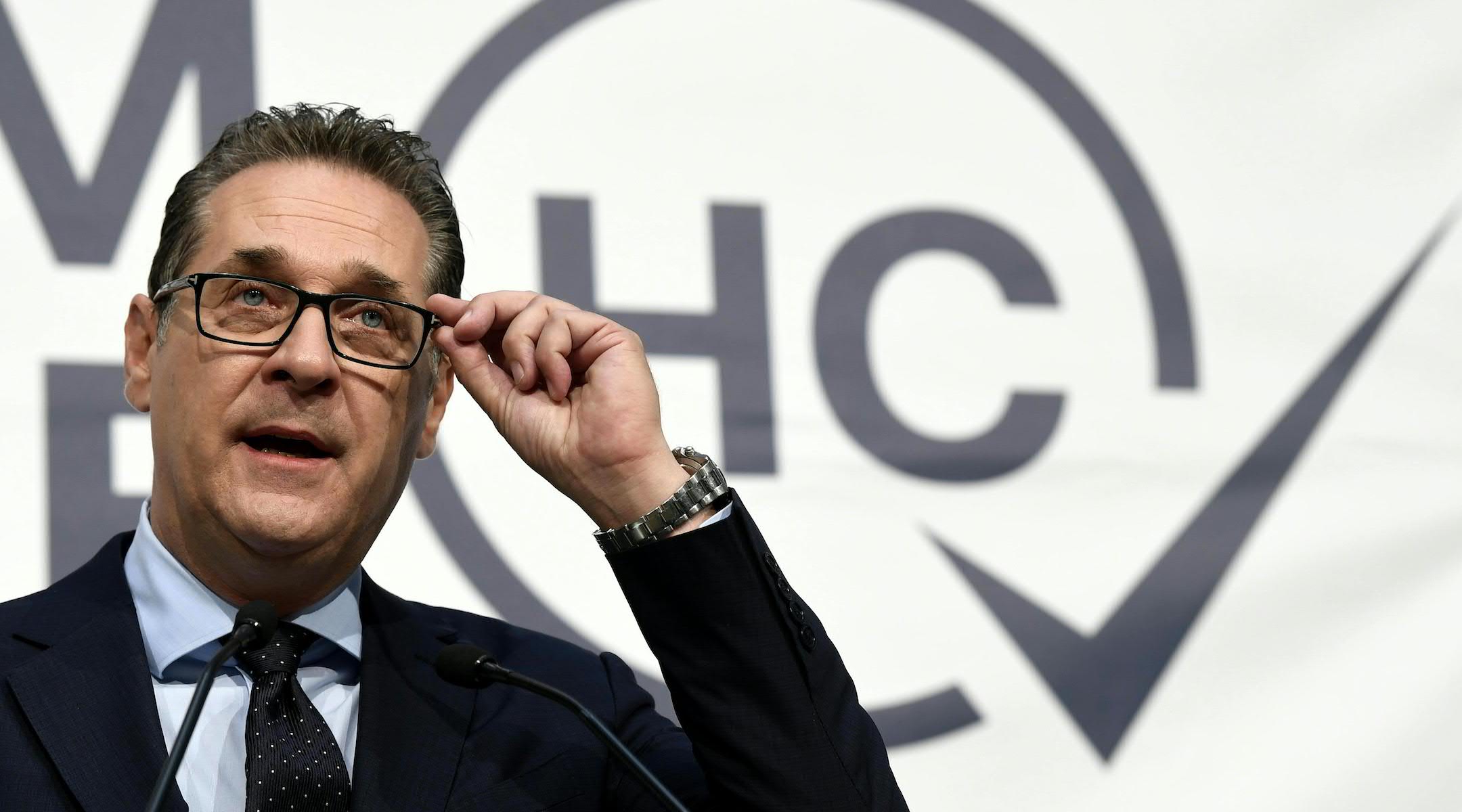 Heinz-Christian Strache gives a press conference in Vienna on the DAOe, or Alliance for Austria citizen movement he leads, May 15, 2020. (Harald Schneider/APA/AFP via Getty Images)
Advertisement

BERLIN (JTA) – A former vice chancellor in Austria is accused of writing a dedication in the 1990s for a notorious anti-Semitic book in which he speaks of a “power-hungry Jewish world view.”

Heinz-Christian Strache, who quit the government in disgrace over a corruption scandal last year and was expelled from the far-right Freedom Party, apparently penned the dedication to a friend from right-wing circles in a copy of Jonak von Freyenwald’s 1941 book “Jewish Confessions from all Times and Lands.”

A handwriting expert consulted by the Suddeutsche Zeitung, the newspaper that broke the story, said the dedication was almost certainly written by Strache.

“This book should give you an insight into the convoluted and power-hungry Jewish world view,” the dedication begins. “As part of our country’s political elite, we must study our enemies, expose and confront their convoluted ideas.”

Through his attorney, Strache has said he does not recall writing the dedication in the 1990s, though he acknowledges knowing the recipient, who has not been named.

The book, an infamous example of wartime Austrian anti-Semitism, came out in the German Nazi publication Der Sturmer, an anti-Semitic newspaper. Its founder, Julius Streicher, was executed in 1946 for crimes against humanity.

Strache, 50, has long claimed never to have said anything anti-Semitic, and today claims undying support for Israel and outright rejection of anti-Semitism.

But Oskar Deutsch, president of the Israelite Community of Vienna, in comments to the Suddeutsche Zeitung and on his Facebook page said this evidence of Strache’s “staunch hatred of Jewry, enriched by conspiracy theories, is neither an isolated incident nor a youthful sin.”

Meanwhile, a parliamentary committee is to begin its investigation on Thursday of the corruption allegations against Strache stemming from a video that surfaced in 2017 in which he appeared to offer business deals to a Russian woman if she would support his election bid behind the scenes. The Freedom Party then expelled him.

Strache started his own party, Team HC Strache-Alliance for Austria.