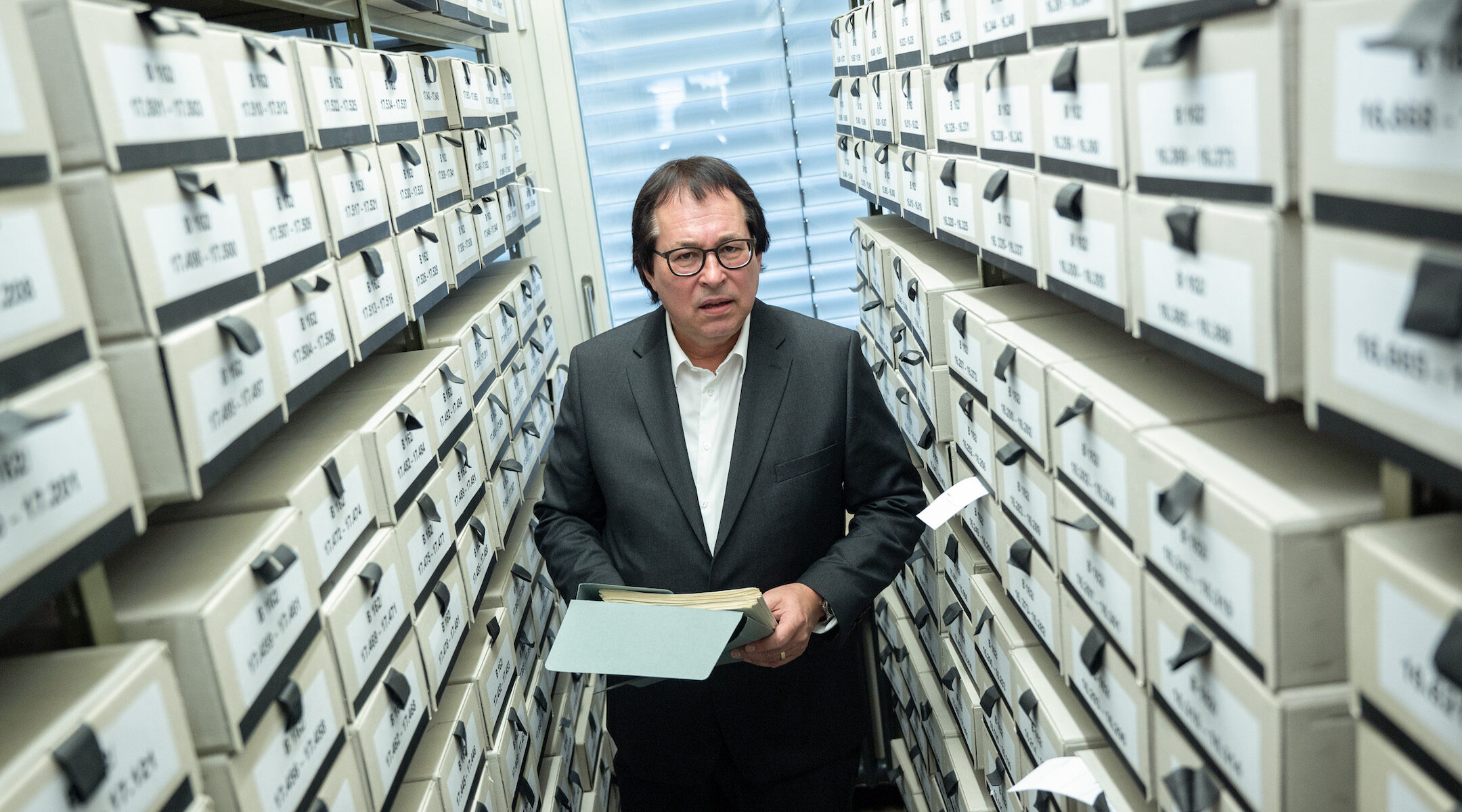 Thomas Will, head of the Central Office for the Investigation of National Socialist Crimes, stands among the office's files in Ludwigsburg, Germany, Feb. 18, 2021. (Sebastian Gollnow/picture alliance via Getty Images)
Advertisement

BERLIN (JTA) – As Germany prepares to put a 100-year-old man on trial for Nazi war crimes, public prosecutors in several German states have announced that they are investigating more than a dozen other suspects.

Most of the cases involve concentration camp guards who may be charged as accessories to murder following the precedent-setting conviction of Ivan Demjanjuk in Munich in 2011. Demjanjuk was found guilty as an accessory in the murders of nearly 30,000 Jews in the Sobibor death camp in Nazi-occupied Poland.

According to German news reports, trials are already set to begin this fall in two cases: A 96-year-old woman will appear before the Itzehoe Regional Court in Schleswig-Holstein, and the 100-year-old man is due to stand trial at the Neuruppin Regional Court in the former East German state of Brandenburg.

Meanwhile, nine investigations are ongoing and there are six more preliminary probes, Thomas Will, head of the Central Office for the Investigation of National Socialist Crimes based in Ludwigsburg, told Spiegel magazine. There is no statute of limitations for murder and accessory to murder.

Thomas Walther, an attorney who represented co-plaintiffs in the Demjanjuk trial and reportedly will do the same in this trial, said in a recent interview with the Tagesspiegel newspaper that his clients, Holocaust survivors, are just as old as the accused and have never given up hope for justice.

After the indictment of the 100-year-old man was handed down earlier this year, the vice president of the International Auschwitz Committee, Christoph Heubner, told RBB broadcast news that “for the aged survivors … this trial is also an important example that justice knows no expiration date and that the prosecution of SS perpetrators must not come to an end despite their old age.”

The defendant, whose name has not been released to the public, was found medically fit to stand trial for up to 2 ½ hours per day, according to the Welt am Sonntag newspaper. He is accused of being a knowing and willing accessory in 3,518 murders at the former Sachsenhausen concentration camp, outside Berlin, where he reportedly was a guard from 1942 to 1945. He allegedly was involved in the shooting of Soviet prisoners of war in 1942 and assisted in the murder of other prisoners with the poison gas Zyklon B.

At least one other case involves a former guard at the same camp. Investigators have not yet determined whether he is healthy enough to stand trial.