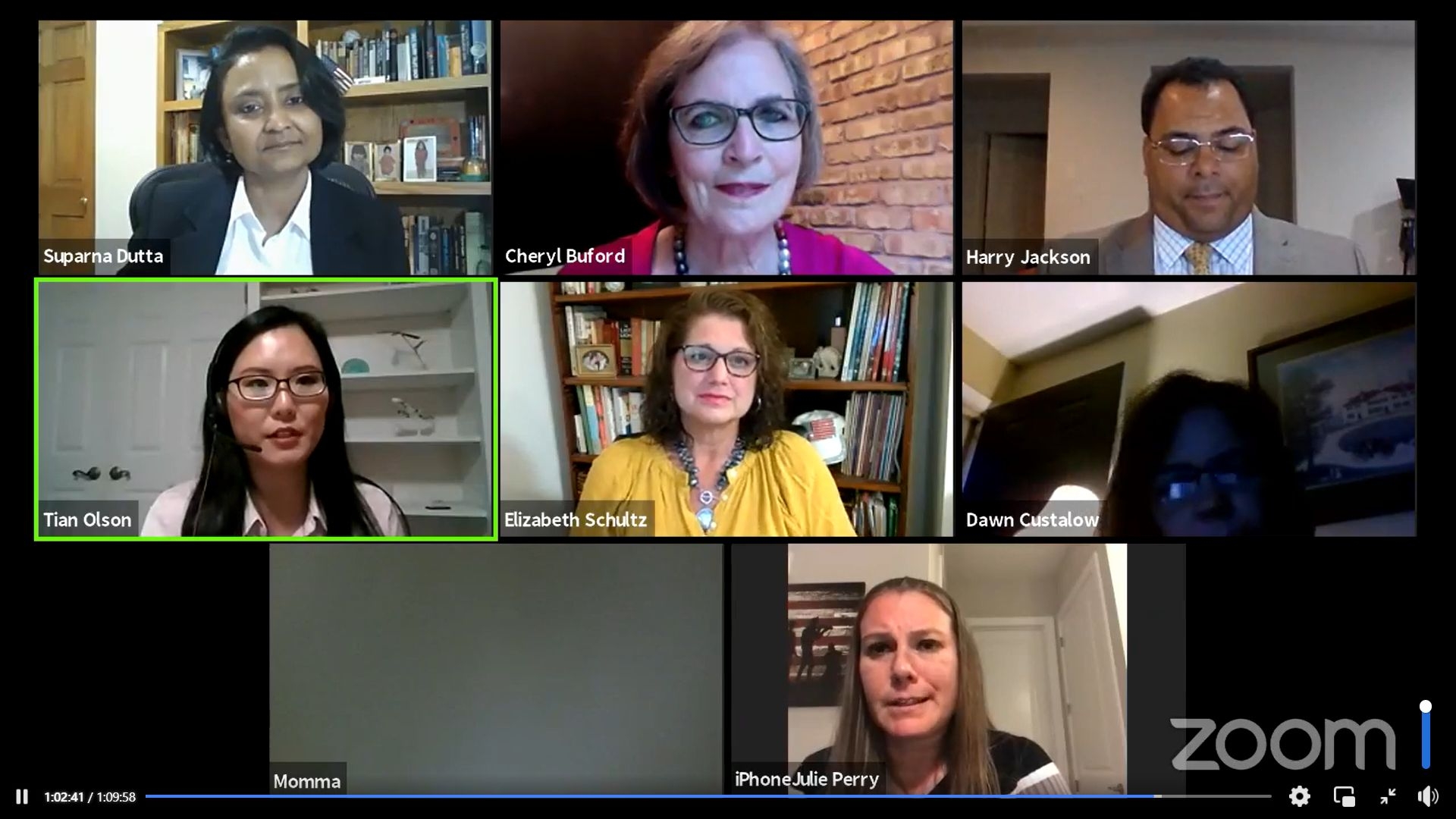 Julie Perry, lower right, a Republican running for the House of Delegates in Virginia, speaks at an online event for Glenn Youngkin, the Republican nominee for governor, July 28, 2021. (Screenshot)
Advertisement

(JTA) — A history teacher running for the Virginia House of Delegates said that being a conservative teacher in Virginia today is akin to being Jewish in Germany during the 1930s.

“To come out and say that you’re a teacher on the right is almost as dangerous as saying, as almost saying, going through Germany in the 1930s and saying ‘I’m Jewish.’ It’s gotten that bad,” Julie Perry said Wednesday in an online event entitled “Educators for Youngkin Coalition.” Glenn Youngkin is the Republican nominee for governor.

“Think about what’s happened with Tanner Cross,” Perry said. Tanner Cross is a Loudon County teacher the school system suspended for saying in a public forum that he would address transgender students by their birth gender pronouns. A court issued an injunction against the suspension and Cross is suing the school system.

A number of Republicans over the last year, including the prominent House Reps. Marjorie Taylor Greene and Lauren Boebert, have likened coronavirus restrictions and safety measures to the Nazi treatment of Jews, drawing rebukes from Jewish groups who say it cheapens the horrors inflicted on Jews at that time. Jews targeted by Nazis in the 1930s — the period leading up to the Holocaust which historians generally say started in 1941 — were stripped of their property and livelihoods, beaten, deported and frequently murdered.

The Democratic Party of Virginia condemned Perry’s statement and called on Youngkin to denounce Perry.

“Glenn Youngkin and the Virginia House Republican Caucus must condemn these remarks and end their support of Perry’s campaign,” the party said in a statement. “Otherwise, Virginians will have no choice but to interpret their silence as an endorsement of her antisemitism.”

Perry forcefully endorsed Youngkin during the session and Youngkin’s political action committee has given the largest donation, $3,000, to Perry’s campaign to win the 86th District, straddling Loudon and Fairfax counties. The seat is currently held by a Democrat.

Perry in a statement regretted how she phrased her observation, but said that it emerged from having been bullied.

“It was never my intention to be disrespectful,” she told Virginia Scope, a political newsletter. “I wish I could go back and express what I said differently, to more accurately convey the fear and intimidation I and many of my fellow teachers have felt in the face of the political activists calling us racists and saying they wish we were dead. Even though one of my grandparents was Jewish, I was called a Nazi just because I don’t agree with the far-left agenda invading our schools.”

Youngkin’s campaign said Perry was right to express regret, but also agreed with her broader point. “Julie has said she wishes she had expressed her point differently and we agree,” a spokesperson for Youngkin told the Jewish Telegraphic Agency. “She’s absolutely right that teachers who don’t support the radical left-wing political agenda that McAuliffe is forcing into classrooms have been targeted, bullied and intimidated. Just recently we saw a Fairfax school official say people like Julie should ‘die’ and the leader of the local Democrat Party actually applauded that.”

Michelle Leete, an official with the Virginia and Fairfax County PTAs, lost both jobs earlier this month when she said at a rally “Let them die.” Conservatives said she was referring to parents who opposed critical race theory, but Leete told The Washington Post she was referring to the ideas they espoused. Fox News reported that the chairman of Fairfax County Democrats, Bryan Graham, appears to be applauding when Leete makes the offending comment.

Virginia has over the last decade transitioned from a Republican to a Democratic-leaning state. Perry and other educators during the session decried what they said were lowered standards, caused they said in part by mandates to emphasize equity in teaching.

Perry, who teaches world history, said she was affronted by changes to curriculum on the Roman era and the colonial era in the Americas.

“They want us to teach how they were certain groups of people oppressed in Rome and it’s so sad because Rome had so many accomplishments,” she said. “To see that taking away, is you’re taking away history.”

Perry also complained that she was forced to teach that the British “abused” Pocahontas, the Powhatan princess who was held captive for ransom by American colonists. She converted to Christianity while in captivity and married a colonist, John Rolfe.