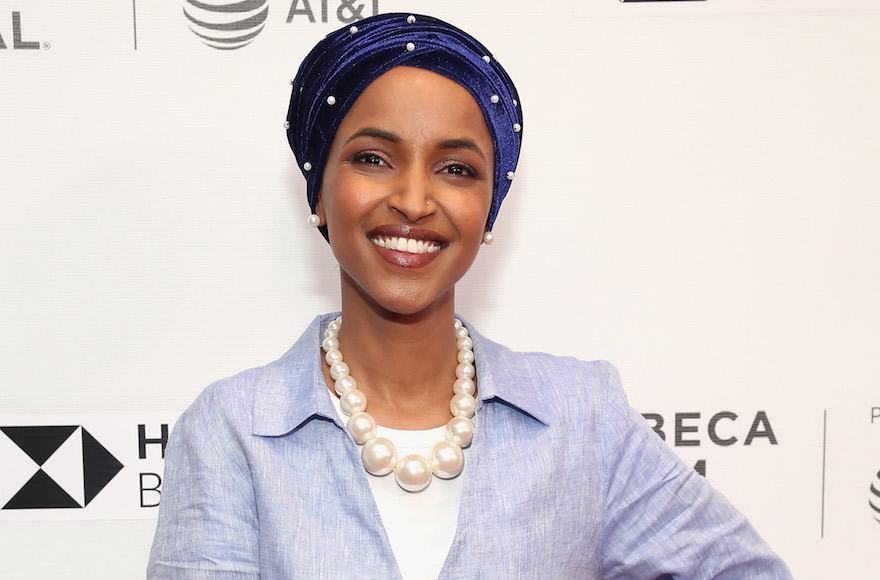 Ilhan Omar at the premiere of "Time For Ilhan," a film about her run for a congressional seat in Minnesota, during the 2018 Tribeca Film Festival at Cinepolis Chelsea in New York City, April 21, 2018. (Astrid Stawiarz/Getty Images for Tribeca Film Festival)
Advertisement

A letter being circulated Monday in the U.S. House of Representatives among Jewish Democrats urged the party leadership there to have the caucus call on every Democrat to speak out against anti-Semitism.

The letter addressed to Speaker Nancy Pelosi of California, leader Steny Hoyer of Maryland and three other leaders was initiated by Reps. Josh Gottheimer of New Jersey and Elaine Luria of Virginia.

“We must speak out when any Member — Democrat or Republican — uses harmful tropes or stereotypes, levels accusations of dual loyalty, or makes reckless statements like those of yesterday,” the letter says.

A day earlier Omar tweeted “It’s all about the Benjamins,” or cash, when referring to a call by House Republican leader Kevin McCarthy of California to take action against Omar for a 7-year-old tweet that was perceived as anti-Semitic, and for which she has apologized. Asked to clarify whom she was referring to, she replied “AIPAC!” The American Israel Public Affairs Committee does not give money to lawmakers.

Omar is a member of Engel’s Foreign Affairs Committee.

“I fully expect that when we disagree on the Foreign Affairs Committee, we will debate policy on the merits and never question members’ motives or resort to personal attacks,” Engel said in his statement.