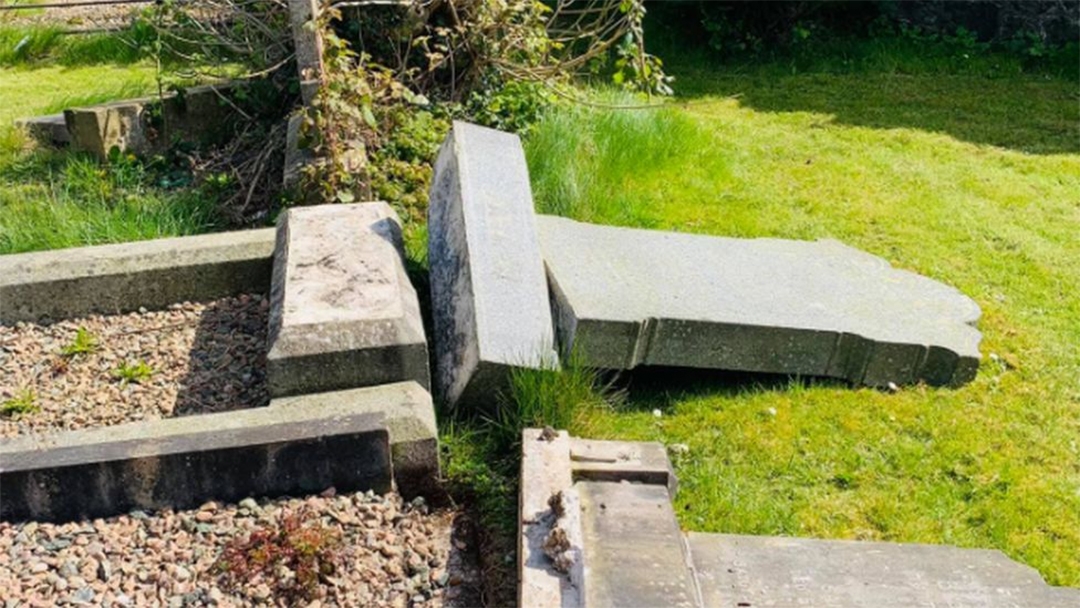 The aftermath of vandalism at the Jewish section of a municipal cemetery in Belfast, Northern Ireland, April 16, 2021. (Courtesy of Steven Corr)
Advertisement

(JTA) — Unidentified vandals knocked down and smashed at least 10 gravestones in the Jewish section of a cemetery in Belfast, Northern Ireland on Thursday.

The vandalism, which police are investigating as a hate crime, occurred at the City Cemetery of Belfast, the BBC reported Saturday.

The Jewish section has graves as old as the 1870s, according to the BBC. They occupy a walled-off section of the cemetery, which is maintained by the Belfast City Council.

Steven Corr, a politician for the Sinn Féin party, one of Northern Ireland’s largest, visited the graveyard on Friday to help clean up the damage.

“These attacks on the headstones of dead people need to stop,” he wrote on social media.

In 2016, 13 headstones were damaged in a similar attack on the Jewish section of the same graveyard.

Separately, police in Denmark arrested someone on Wednesday suspected of being involved in the anti-Semitic display at the Aalborg Jewish cemetery, in the country’s north, earlier this month. The suspect allegedly used red paint, baby dolls and anti-Semitic flyers to create a display that described the Jewish holiday of Passover as a celebration by Jews of the death of Egyptian children.

The incident in Aalborg closely followed a similar action in Norkoping, Sweden, and is believed to have been perpetrated by the neo-Nazi Nordic Resistance Movement.