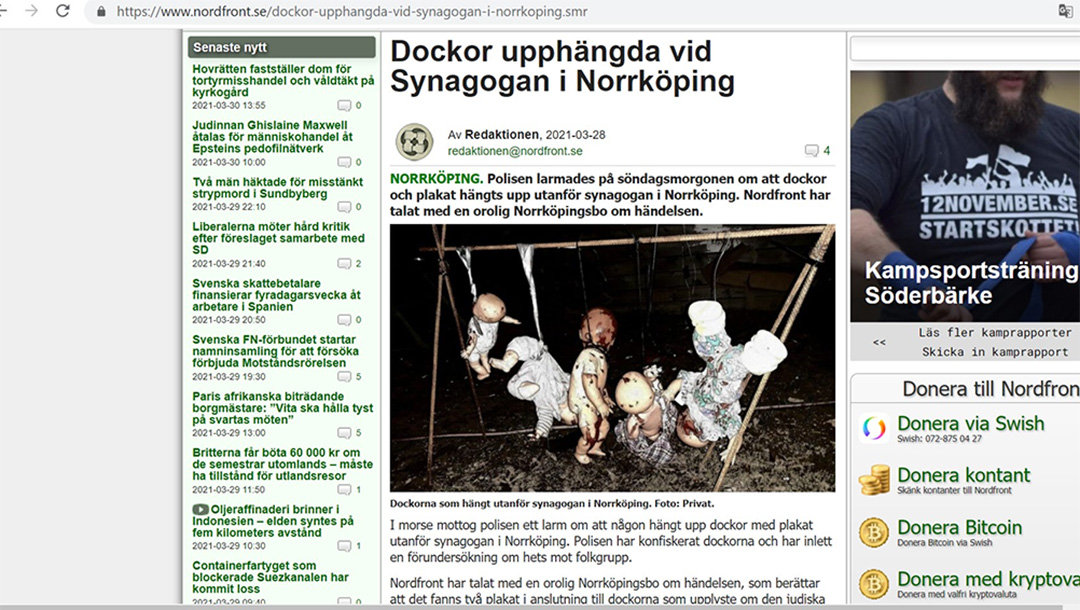 The website of the Nordic Resistance Movement features a picture of dolls hanged outside the synagogue of Norrkoping, Sweden, March 28, 2021. (NRM)
Advertisement

(JTA) — Red paint, baby dolls and anti-Semitic flyers were left outside a Jewish cemetery in Denmark in an apparent follow-up to a similar incident in Sweden.

The display, featuring red paint poured over baby dolls and a document describing Passover as a Jewish celebration of death, was discovered Sunday outside the Jewish cemetery of Aalborg in northern Denmark, Ekstra Bladet reported.

Last week, baby dolls splashed with red paint were strung outside a synagogue in Norrkoping, Sweden, next to the same flyer.

The day that the Norrkoping incident was discovered, the Nordic Resistance Movement, a neo-Nazi group with a history of harassing Jews on Jewish holidays, published on its website a picture of the display that was taken at night. The Anti-Defamation League  Twitter called on Swedish police to treat the Nordic Resistance Movement as a prime suspect.

The description of Passover, a holiday celebrating freedom, as a celebration of death misrepresents the Haggadah, the text that contains the story in which God inflicts 10 plagues of escalating severity on the people of biblical Egypt over their ruler’s refusal to set free the kingdom’s Hebrew slaves.

In the final plague, God kills all the firstborn sons of Egypt but passes over the firstborn Jewish sons, giving the holiday its name.

Police in Denmark and Sweden are investigating the incidents.