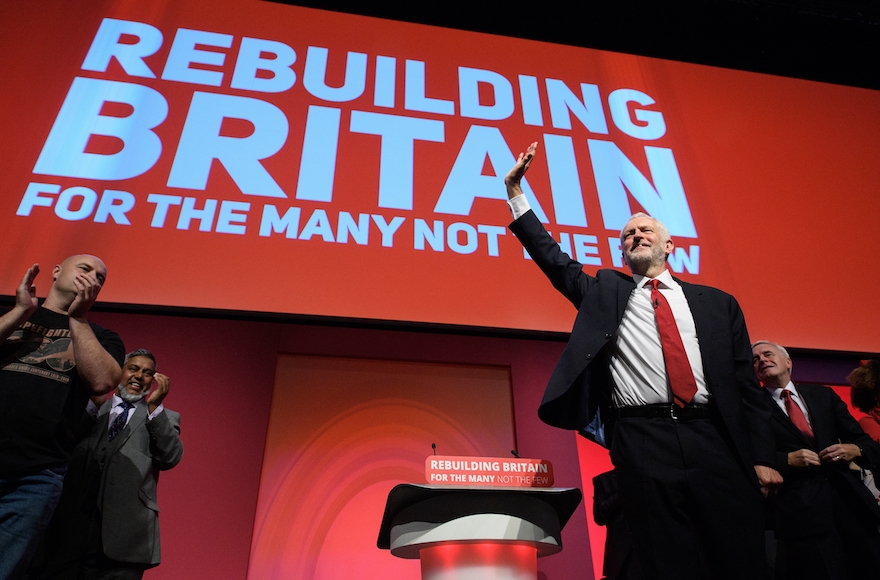 (JTA) — A key ally of Labour leader Jeremy Corbyn has been suspended from the British party for sayings it is “too apologetic” over anti-Semitism.

The remark by lawmaker Chris Williamson — the latest twist in a three-year saga over the proliferation of anti-Semitic hate speech in Labour’s ranks — highlights claims that the party’s leadership is split on whether to address the problem.

“We have backed off too much, we have given too much ground, we have been too apologetic,” Williamson said this month at a speech during a gathering of Corbyn supporters, the Yorkshire Post reported Tuesday.

Four Labour lawmakers condemned Williamson’s comment, the BBC reported. A Labour spokesperson said a probe has been initiated into Williamson’s remark and that he would not be punished until it was concluded. Hours later, amid internal scrutiny and in the media, party spokespeople said that he was suspended.

The Board of Deputies of British Jews said the suspension was “the right move, if long overdue.” But the Campaign Against Antisemitism watchdog group said in sits statement “The suspension of Chris Williamson under duress shows that the Labour Party no longer possesses moral initiative.”

Since his election in 2015 to head Labour, Corbyn has fought allegations that his critical attitude toward Israel and alleged tolerance of anti-Semitism have injected Jew hatred into the heart of the party.

In 2009, he called Hamas and Hezbollah his friends and said that Hamas is working to achieve peace and justice. In 2013, he defended an anti-Semitic mural. In 2014, he laid flowers on the graves of Palestinian terrorists who murdered Israeli athletes in Munich in 1972. The following year he said British “Zionists” don’t understand British irony.

Williamson this month booked a room in parliament for a screening of a film by activist Jackie Walker titled “Witch Hunt” about her suspension from Labour over anti-Semitism.

One of them, Luciana Berger, tweeted in response to Williamson’s words, saying: “This is what I have left behind. It’s toxic.”