Man who toppled over 100 headstones at Jewish cemetery in St. Louis sentenced to 3 years probation 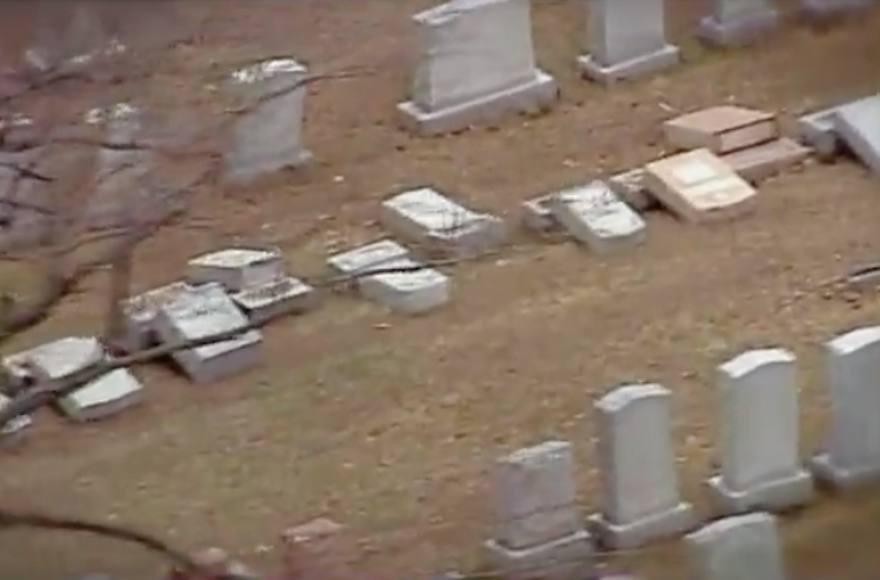 A view of a vandalized St. Louis-area Jewish cemetery. (Screenshot from KTVI)
Advertisement

(JTA) — A man from suburban St. Louis was sentenced to three years probation for toppling more than 100 headstones at a local Jewish cemetery.

Alzado Harris, 35, was charged a year ago for the vandalism caused at the Chesed Shel Emeth Cemetery in suburban St. Louis in February 2017, which totaled more than $30,000 in damages.

After his arrest last year, Harris admitted to the crime, saying he was drunk, on drugs and angry at a friend and took it out on the cemetery.  He was not charged with a bias or hate crime.

“There is no evidence to indicate the incident was racially, ethnically or religiously motivated,” University City police said in a statement at the time of his arrest.

Harris on Thursday pleaded guilty to felony institutional vandalism, the St. Louis Dispatch reported.  In addition to the three years probation, he was ordered to pay $5,000 in restitution, maintain full-time work, take an anger management course, and not contact the victim, the newspaper reported citing court records.

The attack came as Jewish community centers and other Jewish institutions around the country were receiving dozens of bomb threats.

In the wake of the attack, Eric Greitens, who is Jewish and was Missouri’s governor  at the time, volunteered with members of his staff to help clean and repair the damage to the cemetery, and Vice President Mike Pence visited the cemetery, picking up a rake to help with cleanup efforts.

Two Muslim activists, Linda Sarsour and Tarek El-Messidi, launched a crowdfunding campaign to raise $20,000 for repairs, which ultimately raised over $162,000 and also paid to repair and restore two other vandalized U.S. Jewish cemeteries and a vandalized synagogue.

The local Jewish Federation also raised some $250,000 to provide security upgrades for Chesed Shel Emeth and all Jewish cemeteries in and around the city.

The cemetery was repaired and rededicated in August 2017. The repairs included upgraded security, including cameras, lighting and higher fencing.