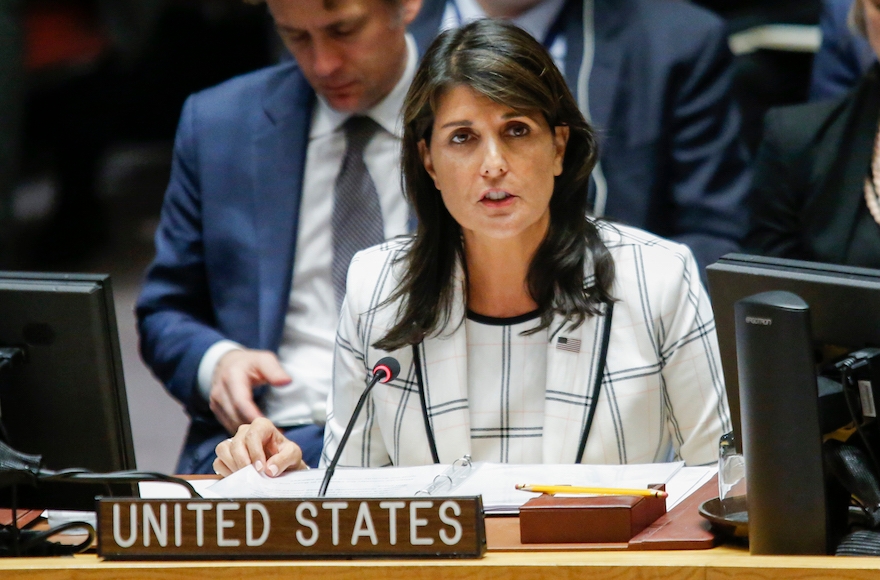 (JTA) — Former U.S. Ambassador to the United Nations Nikki Haley will be honored by the World Jewish Congress.

Haley will receive the WJC’s annual Theodor Herzl Award, recognizing individuals who work to promote Herzl’s ideals for a safer, more tolerant world for the Jewish people, WJC said in a statement.

In addition, actor, singer, director, and photographer Joel Grey will be presented with the WJC’s fourth Teddy Kollek Award for the Advancement of Jewish Culture.

World Jewish Congress President Ronald Lauder in a statement issued on Wednesday said that “I have met many heads of state, dignitaries, and ambassadors who have worked diligently in support of Israel and defended it across the international stage. Throughout her tenure, U.S. Ambassador to the U.N, H.E. Nikki Haley, proved to be a giant in this realm, exemplifying this country’s unwavering friendship for Israel and commitment to world Jewry, relentlessly calling out the biases and double standards that pervade in the United Nations and its bodies and demanding action.”

Kirk Douglas was honored with the inaugural Teddy Kollek Award in 2016, followed by film director George Stevens in 2017, and philanthropist Robert Kraft in 2018.