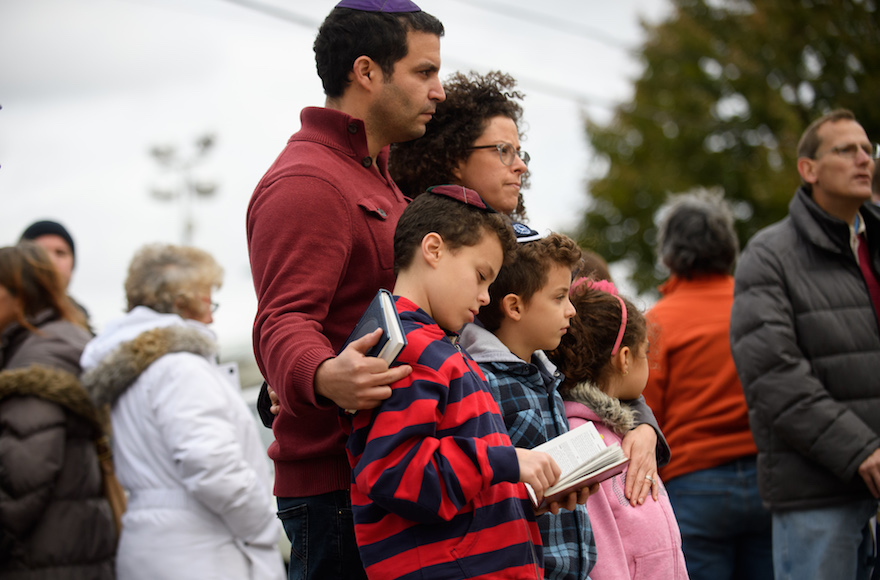 A Jewish family pauses in front of at a memorial for victims of the mass shooting that killed 11 people at the Tree Of Life Synagogue in Pittsburgh, Oct. 29, 2018. (Jeff Swensen/Getty Images)
Advertisement

(JTA) — People across the United States and around the world will join together virtually on the one-year anniversary of the attack on the Tree of Life synagogue building in the Squirrel Hill neighborhood of Pittsburgh.

The virtual commemoration, called “Pause with Pittsburgh,” is scheduled for 5 p.m. on Oct. 27. The moment of solidarity and remembrance for the 11 people who were killed during the attack will include, for those in North America, a text including a video with the mourning prayer and a link to Pittsburgh’s local community public memorial service via livestream, and an opportunity to post on a community message board. Overseas participation is through email.

The program is a project of the Jewish Federations of North America.

“Rather than become desensitized to the terror of a never-ending cycle of senseless deaths, we must focus on doing what we do best: building and sustaining community that brings people together,” Mark Wilf, chair of the Board of Trustees of The Jewish Federations of North America, said in a statement.